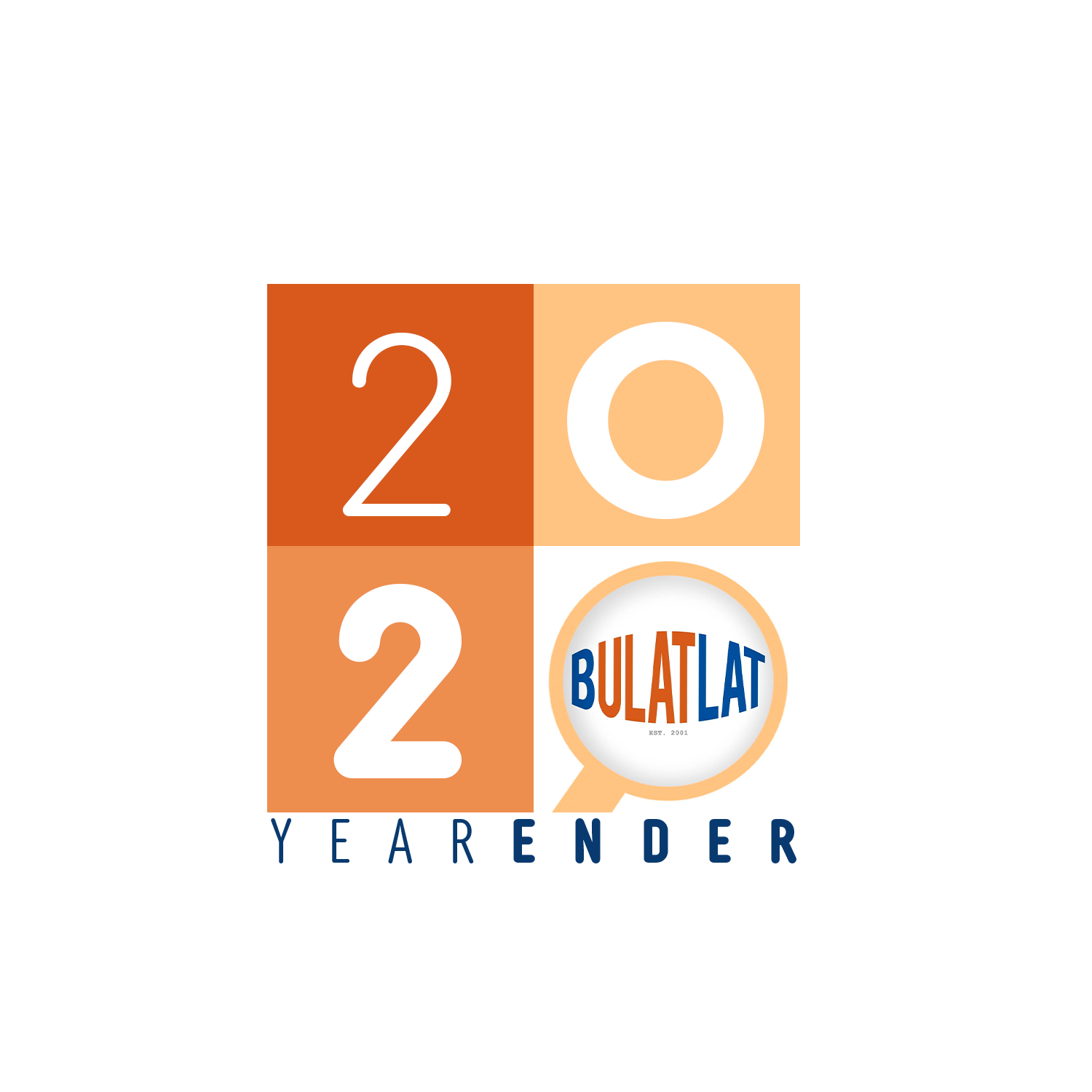 “Rights are not won through silence, through fence sitting and inaction. Rights are won and claimed through difficult, arduous, beautiful, creative and vibrant struggle.”

MANILA – Human rights defenders in the Philippines are facing the worst of times.

This is evident in the recent report of international rights monitor Civicus, which reclassified the civic space in the Philippines from “obstructed” to “repressed.”

According to Civicus, top violations include detention of protesters, censorship and attacks on journalists. Freedoms of speech, association and peaceful assembly have also deteriorated during the pandemic, the report said. (Read the report here.)

“This is after the literal blow by blow attack on civil societies exercise of basic rights and fundamental freedoms this 2020,” Karapatan Secretary General Cristina Palabay said during a webinar on Dec. 8 entitled Human Rights Emergency in the Philippines.

Palabay said the continued red-tagging of human rights defenders, activists and critics under President Duterte’s administration has resulted in serious consequences like being slapped with trumped-up charges, or worse getting killed. 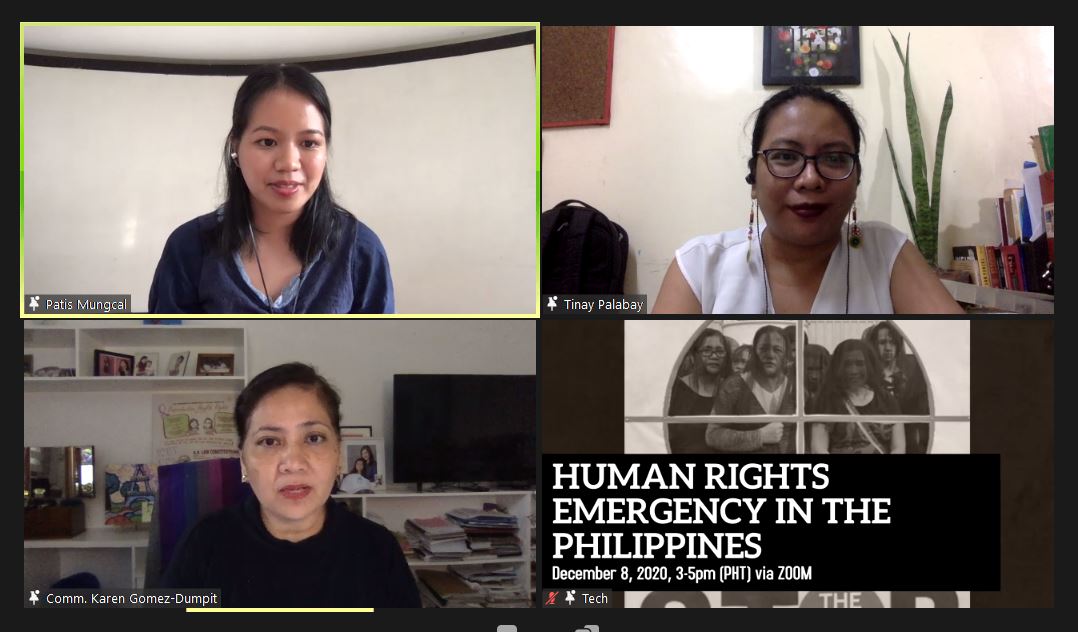 Nonoy Espina, chairperson of the National Union of Journalists in the Philippines (NUJP), also expressed concern on the intensifying red-tagging of members of the media especially the recent red-tagging against the alternative media during the Dec. 1 committee hearing at the Senate.

He said that while they do not accuse the government of having a policy that targets journalists, he maintained that red-tagging now is basically an official policy.

“We see what red-tagging has done to activists. And now that the media is being red-tagged openly, especially our colleagues in alternative media being dragged into the Senate hearing and aligned in the underground, is it far-fetched to worry that we may actually be officially targeted?” Espina said.

No distinction between combatants and activists

Palabay pointed out that red-tagging of activists and human rights defenders is a crime against humanity as it resulted in rights violations.

“These officials including the president have openly incited violence on those they red tag. This also violates the ethical standards for public officials,” said Palabay, referring to the officials of the National Task Force to End Local Communist Armed Conflict (NTF-ELCAC).

Red-tagging has dangerous implications, Palabay said, be it activists who were tagged as front organizations of the underground movement or those who fight against the government’s war on illegal drugs.

She cited the arrest and detention of Sen. Leila De Lima who had been investigating the killings in the implementation of the government’s war on drugs, the sedition case filed against priest Fr. Flavie Villanueva, which was later dismissed by the Department of Justice, and the murder of Butch Rosales, a volunteer of the Rise for Life and for Rights, in Cebu in 2018.

In the course of the counterinsurgency program of the government, Palabay said the red-tagging of activists and human rights defenders has led to the killing of 353 individuals. This includes the 188 human rights defenders including Karapatan’s human rights workers such as Zara Alvarez and Negros Occidental councilor Bernardino “Toto” Patigas. There is also the enforced disappearance of human rights worker Elena Tijamo who was taken by unidentified armed men from her house last June and former Karapatan officer in Southern Mindanao Honey Mae Suazo who has not been found since November last year.

She said that red-tagging has also led to the arrest and detention of more than 400 activists and critics. On International Human Rights Day, Dec. 10, the police arrested six activists and one journalists in simultaneous raids.

Online and offline, Palabay said the red taggers also wrongfully accused the more than 250 organizations within and outside the Philippines such as Oxfam, Commission on Human Rights and the office of the United Nations Special Rapporteurs.

Attack on the press

Espina said that the freedom of the press under the current administration is still alive amid the attacks.
While he said that press freedom now is threatened in a way that it hasn’t been since the Marcos dictatorship, the members of the press still continue their duty to the people.

“Malaya ang pamamahayag sa Pilipinas hindi dahil pinapayagan kami kundi dahil ninanais naming maging malaya. But it hasn’t been easy under a president who already defined its relationship to the media when he said (in may 2016 before assuming office) that ‘just because you’re a journalist you are not going to be killed if you are a son of a bitch’,” he said.

He said that under the Duterte administration, the media has been under attack especially those who reported and critical of its policies such as the campaign against illegal drugs.

The NUJP also documented a spike in libel cases especially in the provinces. He said there are now 23 ongoing cases.

According to the Center for Media Freedom and Responsibility (CMFR), only four cases of media killings ended with a conviction of perpetrators and masterminds including the case of Ampatuan massacre.

But despite these attacks and wrongful accusations against the media, Espina believes that the press has the potent weapon to counter this and that is to continue telling the truth.

“We should continue to tell our stories, the stories of our people of our time and let this become part of our collective memory. For it is in remembering that we can be sure that justice will eventually be ours,” he said.

Rights violations should be stopped

Palabay said that the government’s key policies, the campaign against illegal drugs and the counterinsurgency of the government which they see as major factors in the climate of impunity should be rescinded.

“We are adamant in calling for the enactment of Human Rights Defender Bill that criminalize red-tagging, the review on the rule on presumption of regularity of police and military operations and the recognition of human rights defenders,” she said.

“Justice system needs to be rebooted, it has been ailing for so long and severely destroyed especially in the past four years that there is a rule of injustice, disinformation, impunity and authoritarianism,” she added.

Commissioner Karen Gomez-Dumpit of the Commission on Human Rights, meanwhile, encouraged the public to speak out.

Now is not the time to be silent, she said.

“We are strong in our position that red-tagging is wrong. Everyone has a responsibility to speak about red-tagging,” Dumpit said.

Gomez-Dumpit said that she has been red-tagged for the first time under this administration in her more than two decades of service in the CHR.

She said that while the Human Rights Summit by the Department of Justice is a welcome effort, as this is in line with the commitment of the Philippine government with the Technical Cooperation Resolution of the United Nations Human Rights Council. But, she stressed, that these discussions on human rights should “lead into more concrete improvement of the situation on the ground.”

She also said that there should be a distinction of activists and those who take up arms. “Otherwise it would also be a violation of the international humanitarian law. Activists are not enemies,” she said.

Palabay also reminded the public to fight for their rights.

“Rights are not won through silence, through fence sitting and inaction. Rights are won and claimed through difficult, arduous, beautiful, creative and vibrant struggle,” she said.