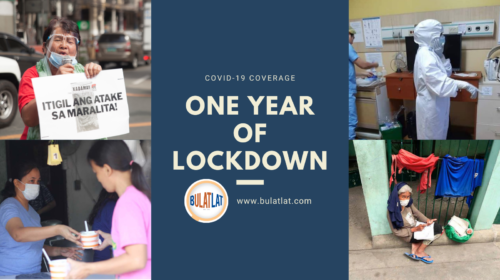 “Time and again, we have reminded authorities that neither the pandemic nor their grave ignorance of the law or dumb over-zealousness is an excuse to trample upon basic rights and curtail freedoms.” — NUPL

Curfews were set and checkpoints were put in place to regulate people’s mobility. Uniformed men, some with firearms, were visible on the streets, enforcing quarantine measures.

Rights groups observed that the imposition of these measures are oppressive, especially among the most vulnerable sectors. And those who sought redress for the government’s lack of relief measures were arrested. Even relief workers from people’s organizations and non-government organizations were arrested for providing much needed food and supplies to poor communities.

Alleged violators were charged with violations of Republic Act No. 11332 or Mandatory reporting of notifiable diseases and health events of public health concern act, Republic Act 11469 or Bayanihan to Heal as One Act, the Public Assembly Law (BP 880), and Article 151 of the Revised Penal Code on resistance and disobedience to a person in authority.

The National Union of Peoples’ Lawyers (NUPL), in a statement, asserts that these charges are “totally devoid of factual and legal basis” because the people’s civil and political rights still exist even during the pandemic.

“Time and again, we have reminded authorities that neither the pandemic nor their grave ignorance of the law or dumb over-zealousness is an excuse to trample upon basic rights and curtail freedoms,” the NUPL said.

True enough, many of these charges were dismissed later on for lack of merit. For one, the case of 10 relief volunteers in Marikina City, arrested on May 1, 2020, was junked by the prosecutor “for lack of probable cause and insufficiency of evidence.”

Airing the legitimate calls of the people

On April 1, 2020, at least 21 residents of Sitio San Roque in Quezon City were accosted by the police and detained after an unplanned protest action erupted when the desperate and hungry residents were made to wait for hours for aid that seemed non-existent.

They spent days in detention as their families had to secure P15,000 for each of those detained as bail money. An added burden for jobless poor people who could not even put food on their tables.

Those detained were charged for violating the public assembly law; non-cooperation under RA 11332; disobedience of a lawful order or violation of Article 151 of the Revised Penal Code; spreading of false information under the RA 11469 or Bayanihan to Heal as One Act; and, impeding access to roads also under RA 11469.

As of this writing, there are no updates on the cases.

The Department of Interior and Local Government (DILG) alleged that the urban poor group Kadamay peddled misinformation to the residents of the community, leading to the spontaneous protest. This was denied by the group adding that the government is focused on forcing people to “obey rules” rather than on giving the right solution to the health crisis and the consequent economic hardship of the poor.

This is also the same reason why Joan Bernadette Paz-Bonganay of Gabriela, together with other volunteers, decided to distribute cooked meals to urban poor communities in Marikina City.

On the morning of May 1, 2020, Bonganay and nine others were distributing meals to the residents of Barangay Industrial Valley Complex, Marikina City when they were suddenly apprehended by the police. This was unexpected, she said, as they have complied with the requirements of providing relief under the pandemic.

It was already two months, she said, when Metro Manila was placed under enhanced community quarantine (ECQ) and government aid still has not reached many of the poor communities.

This is why, with the effort of the Bayanihang Marikenyo at Marikenya together with #BabaeAko Network, decided to provide cooked meals to the families in different communities in Marikina City.

“Many of families in the community are families of jeepney drivers who stopped working because of the restriction. Many of them have lost their livelihood,” Bonganay told Bulatlat in an interview. Jeepney drivers were among those arrested and charged for violating RA 11332, among others.

Read: In lockdown: Kings of the road sidelined

It was also because of the hardship of poor people and the threats posed by the looming passage of the Anti-Terror Law that brought the LGBTQ to Mendiola bridge to commemorate Pride March last June 26, 2020. This was the first protest held in Mendiola months after the imposition of ECQ.

Unfortunately, they were violently dispersed by the police as they negotiated to finish the short program they prepared arguing that they were observing the minimum health protocol. At least 20 were arrested and detained at the Manila Police District. They were collectively called the Pride 20.

“Pride Month is not Pride Month if there will be no march. With the political backdrop that is going on in the Philippines there is a reason to go out on the streets and amplify the legitimate calls of the members of the LGBTQ and the people,” Rey Valmores-Salinas, national spokesperson of Bahaghari, a national democratic alliance of militant and anti-imperialist members of the LGBTQ+, told Bulatlat in an interview.

She said members of the LGBTQ are also severely affected by the pandemic as many of them lost their jobs and those seeking jobs are being discriminated.

They were also calling for the passage of the Sexual Orientation and Gender Identity Expression Equality Bill or the Anti-Discrimination Bill. They also found the need to echo the call to junk the then proposed Anti-Terror measure in Congress, she said, the reason why they pursued on holding the Pride March bearing these calls of the people.

“There are a lot more issues that government needs to focus on but they are hellbent in pushing for anti-people measures like the Anti-Terror Law,” Salinas said.

The Pride 20 was charged with illegal assembly, resisting or disobeying a police officer and the violation of the RA 11332.

The Office of the Manila City prosecutor dismissed their case in a resolution dated Dec. 2, 2020 for lack of probable cause. The prosecutor noted that the participants of a peaceful assembly cannot be held criminally liable.

Aside from the violent dispersal, the Pride 20 also experienced psychological abuse during detention, Salinas said.

Salinas said that they feared contracting COVID-19 while in detention as they were kept in a small room where it was impossible to observe physical distancing. The MPD’s capacity to hold detainees were also at the maximum that time, Salinas said. The police were not even wearing masks or observing physical distancing.

Bonganay, meanwhile, recalled how the police laughed at them when they were arrested in Marikina on Labor Day.

“They are laughing at us and telling us why we were giving meals. I was crying when the police handcuffed me. I felt offended. I was embarrassed with my companions who were teachers and the drivers who had to join us because they had no income,” Bonganay said.

Bonganay also joined the Pride 20 in detention. She said that she still went to the protest because they were protesting not only for the rights of the LGBTQ but also against the anti-people measures amid the pandemic.

Her detention did not only have an effect on her, but on her daughter, Armee, as well, who asked her not to go outside because the police might arrest her again.

“Eventually she will realize that no one else would help the people if I we would not go out and help them. She just say, ‘Salbahe talaga yang mga pulis na yan.’ (Those police are really bad.)” Bonganay said.

“It was the people in the community and the mothers that we organize that’s helping me cope with the trauma,” she said.

The case against former Anakpawis congressman Ariel Casilao and five other volunteers for violating Section 9 of RA 11332 was also junked by the Norzagaray Municipal Trial Court.

In a report by Davao Today, the court ruled that the act does not fall under prohibited acts of RA 11332.

They were arrested on April 19, 2020 during a relief operation initiated by Sagip Kanayunan and Tulong Anakpawis. Aside from violation of RA 11332, Casilao was charged with usurpation of authority and the five others with sedition because they were carrying materials that they described as “anti-government.” These “anti-government materials” were old issues of Pinoy Weekly, Linang, COVID-19 handouts and Kilusang Magbubukid ng Pilipinas newsletters. All are legitimate publications.

In Cebu, the court also dismissed the case against the Cebu 8 who were charged in violation of RA 11332 after holding a protest against Anti-Terror Law in UP-Cebu campus on June 5, 2020. The eight includes six UP students and two passersby.

According to the decision penned by Judge Amy Rose A. Soler-Rellin, there was no sufficient evidence that the eight violated the law on mandatory reporting of notifiable diseases.

A similar case was also filed against four women in Pandi, Bulacan who staged an online protest calling for mass testing on the occasion of President Duterte’s State of the Nation Address on July 27, 2020. The case was also dismissed.

In an earlier report by Bulatlat, the police claimed that the four held a protest action, which was rebutted by urban poor group Kadamay, claiming that the women were at home and tending to their duties when the police came and arrested them. They were detained for nine days.

“This is a vindication,” said Salinas on the dismissal of the charges against the Pride 20.

“This is proof that we are right for standing up for our rights and there is nothing wrong with holding a protest,” she said.

Meanwhile, Citizens’ Urgent Response to End Covid-19 (CURE Covid) sees hope amid the present crisis inflicting the Filipino people, as they continue to fight and find ways in helping each other.

“Far from being cowed into submission, the people are rising against poverty, inequality, and tyranny. As the Duterte regime continues to unravel to remain in control of the tumultuous situation, the people’s unity and collective action provide us with hope beyond this crisis,” the group said in a statement.

“Together let us continue to raise our voices and collectively work for a comprehensive, effective, humane, and participatory COVID-19 response,” it added.