The Duterte regime may spin the narratives on the economy all they want. But all indicators show that the country is in a much worse shape today than when it took over in 2016.

MANILA – (Part 2 of 2) The economic managers of Duterte want to frame the regime’s legacy as “the five years before the pandemic and the time of pandemic response”. It is an obvious ploy to blame the catastrophic state of the economy solely on COVID-19. At the same time, it is also meant to push their false narrative of strong economic performance pre-pandemic. Further, it sets up the deceptive and ludicrous tale of “excellent COVID-19 response” of the regime.

As pointed out, however, the economy bereft of any real development plan has been showing signs of crumbling long before the COVID-19 crisis. Duterte, in fact, compounded the blows to the country of slowing migrant remittances that buoy the sinking economy and of worsening jobs crisis. Thus, the people never stood a chance against the enormous social and economic devastation wrought by the pandemic. These were actually further magnified by how Duterte responded to the crisis.

First, Duterte refused to increase the capacity of workers to consume by increasing their wages. The increase in the minimum wage under Duterte is the most sluggish among all Presidents post-EDSA. Under Duterte, the nominal minimum wage in the National Capital Region (NCR) has moved up by just 9.4 percent, as of June 2021. That is two to four times slower compared to similar periods under Corazon Aquino (32.6 percent); Ramos (36.4 percent); Estrada/Arroyo (41.4 percent); Arroyo (36.4 percent); and B. Aquino (19.1 percent).

Second, Duterte imposed tax reforms that weighed most heavily on ordinary income earners. These are the Tax Reform for Acceleration and Inclusion (TRAIN) Act of 2017 and the Corporate Recovery and Tax Incentives for Enterprises (CREATE) Act of 2021. Citing data from the finance department, research group IBON said that both laws would result in a 25-percent decline in direct taxes and a 29-percent increase in sales taxes from 2019 to 2022. Higher sales taxes indicate regressive taxation, meaning the poor pay the same amount of tax per unit of the same item bought by the rich. Lower direct taxes, or taxes on income and wealth, benefit those with more income and wealth.

The direct and domino effect of more taxes on consumption is immense. New and higher excise taxes due to the TRAIN law, for instance, increased the price of diesel by P6.00 per liter. For gasoline, it hiked the price by P5.65 per liter and by P5.00 for kerosene. It also jacked up the price of an LPG tank (11-kilograms) by P33 pesos. Ordinary working people who rely on these products to make a living are adversely affected – from jeepney and tricycle drivers to farmers and fishers, to the carinderia owners and street food peddlers.

Related story: Carinderia vendors and workers lean on each other as food crisis looms

Third, Duterte, consistent with his anti-wage hike, pro-tax increase for the working class, carried on the neoliberal policies that destroy livelihood and push up the cost of living. He further liberalized and deregulated the rice industry with the Rice Tariffication Law (RTL) of 2019. Based on estimates, rice farmers lost between P40 and P80 billion in the first year of the law due to the deluge of imported rice. Such huge losses make the supposed benefit of cheaper rice to consumers negligible, which could be as low as P2 in savings per rice consumer in the first year of RTL.

The oil industry remains deregulated, resulting in unabated price increases. Oil price hikes due to deregulation and Duterte’s new taxes have pushed up the price of gasoline by about 72 percent; diesel, by 89 percent; and LPG, by as much as 50 percent. These are further exacerbated with overpricing by the oil firms. Deregulation allows oil companies to automatically adjust pump prices every week, making profiteering much easier. (See Table 5) 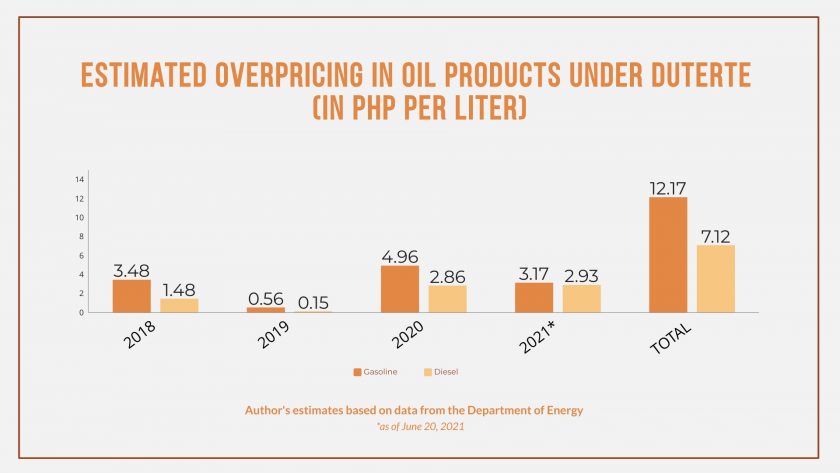 Overall, the prices of basic consumer goods have significantly risen between 2016 and 2021. The retail price of fish in the capital region has ballooned by 33 to 86 percent; meat, by 50 to 100 percent; and vegetables, by 25 to 100 percent. Compare all these increases to the meager 9.4 percent raise in minimum wages in Metro Manila.

Finally, Duterte failed to provide sufficient economic aid to the working people already battered by his neoliberal policies when the pandemic hit. His fiscal package for vulnerable individuals and groups is equivalent to just 3.1 percent of the GDP, based on data from the International Monetary Fund (IMF). The package includes cash aid program for low-income households and social protection measures for vulnerable workers, including displaced migrant workers. In comparison to our neighbors in the region, Thailand’s package is 9.6 percent of GDP; Indonesia, 4.4 percent; Malaysia, 4.3 percent; and Vietnam, 3.6 percent.

This despite the fact that Filipino income earners are the hardest hit by the crisis in the region, according to a survey by the Asian Development Bank Institute (ADBI). About one in five households saw their income dropped by more than 75 percent, while three out of five had their income decline by more than 25 percent. Overall, four out of five households experienced financial difficulty amid the COVID-19 crisis.

Duterte’s economic policies combined with the COVID-19 pandemic to push millions of Filipinos into greater destitution. Comparing the first quarter surveys of SWS in 2016 and 2021, about 1.9 million families (or 9.5 million Filipinos) were added to the number of poor under Duterte. The number of hungry grew by around 1.1 million families (or 5.5 million Filipinos) during the same period. About 1.2 million workers were added to the number of jobless.

The Duterte regime may spin the narratives on the economy all they want. But all indicators show that the country is in a much worse shape today than when it took over in 2016. Even without the pandemic, Duterte’s policies ensured that the economy is on track to its further decay and the productive forces to their further destruction. (RVO)