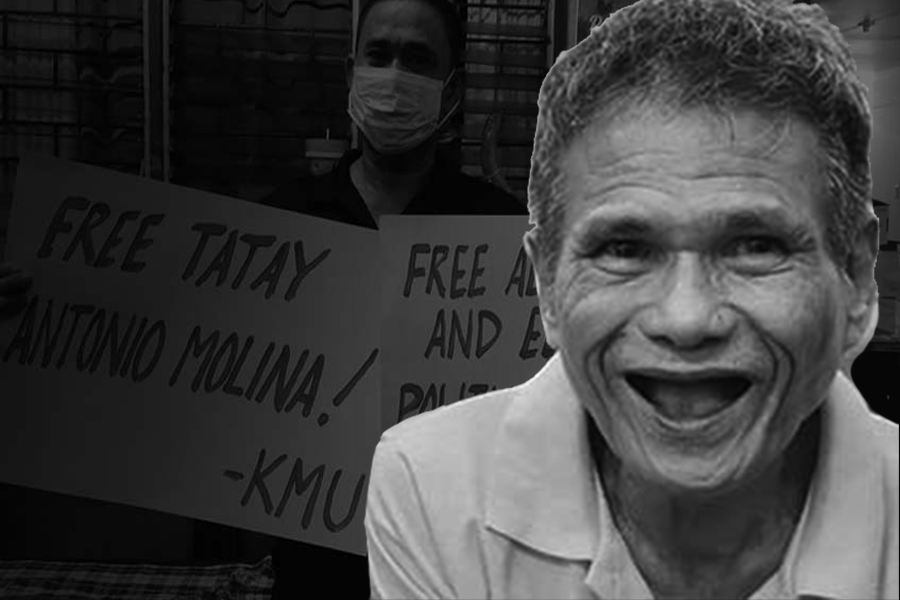 MANILA – A bedridden farmer with stomach cancer and charged with trumped up cases was denied freedom by a Palawan court, an organization of families and friends of political prisoners said.

On Oct. 15, Puerto Princesa Regional Trial Court Branch 51 denied 66-year-old Antonio Molina’s omnibus motion for release on recognizance on humanitarian grounds, saying that it is not a ground for bail.

Molina, a member of Katipunan ng Samahang Magbubukid sa Timog Katagalugan (KASAMA-TK) was arrested on Oct. 4, 2019 in Puerto Princesa, Palawan together with human rights defender Glendhyl Malabanan and five others. They were jailed and charged with illegal possession of firearms and explosives and murder.

“It should bother everyone but it doesn’t bother the court why a bedridden old man, completely disabled and incapable of any self-care, cannot benefit from the equity of the law that was used in principle to grant bail for jailed and convicted politicians accused of non bailable high crimes,” said Fides Lim, spokesperson of Kapatid.

Lim added, “Do Imelda, Enrile, Gloria, Jinggoy, Bong Revilla have more rights and are more equal than others?”

Kapatid said the “judicial pandemic of double standard and selective justice that keeps poor people jailed while the rich and powerful are treated with compassion and allowed bail.”

Molina was diagnosed with stage 4 abdominal sarcoma. His doctor gave him only six months to live because of “poor prognosis due to extreme disease based on CT scan,” Lim said.

The court also denied Molina’s appeal to release the money worth of P30,000 ($591) which was confiscated by the authorities when he was arrested. His lawyers argued that the money is intended for his medical expenses.

Instead, the Palawan court said Molina may be treated by an herbalist to help ease his severe pain.

“Why deny even the lowly sum of P30,000 to a dying man when it should be his jailors who should be spending for his treatment?” Lim asked. She added that last July, during Molina’s hospitalization, the recommended CT scan of his leg and treatment of possible blood clot were not done because he was financially incapable of paying for the much needed treatment.

“We hope this is not a repeat of how the Supreme Court failed thousands of elderly and sick prisoners in 2020 who asked for temporary liberty because of the threats of the deadly COVID-19? If the Supreme Court and the Sandiganbayan were able to consider the age and health condition of Enrile and Imelda as a reason to grant bail, the RTC should likewise grant Molina the chance to spend the last days of his life outside prison in the care of his family,” Lim said.

“As the law does not provide an explicit recourse, the court should exercise compassionate intervention and equity jurisdiction. We appeal to the court’s better judgment to review its decision,” Lim said. (RTS, JJE)