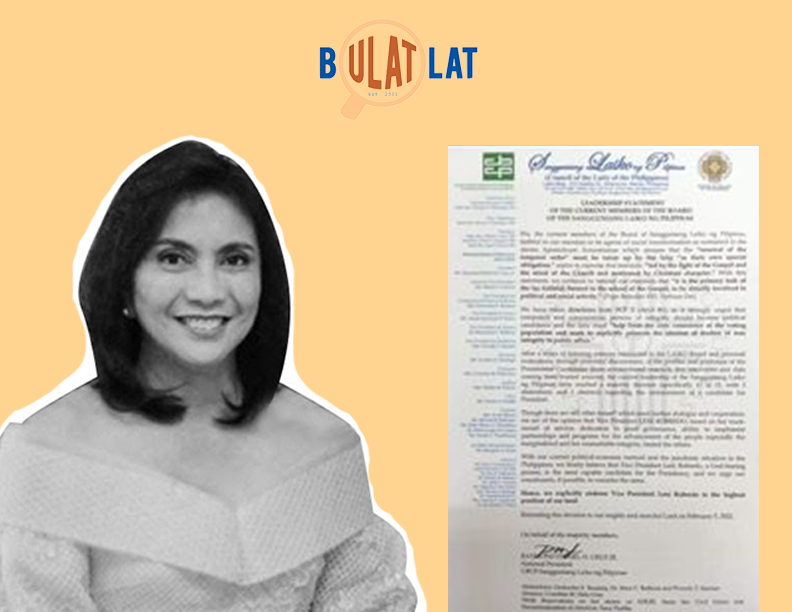 MANILA – An organization of church lay people has expressed its support for the presidential bid of Vice President Leni Robredo, saying that it is part of their civic conscience to explicitly promote the election of leaders of true integrity to public office.”

“With our current political-economic turmoil and the pandemic situation in the Philippines, we firmly believe that Vice President Leni Robredo, a God-fearing person, is the most capable candidate for the Presidency, and we urge our constituents, if possible, to consider the same,” said Sangguniang Laiko ng Pilipinas or Laiko.

In a statement,  Laiko said they have taken directions from the Catholic teachings, particularly from the Second Plenary Council of the Philippines (PCP II) that urged the laity to “help form the civic conscience of the voting population and work to explicitly promote the election of leaders of true integrity to public office.”

The Laiko is a public association of the Catholic lay people that was established by the Catholic Bishops’ Conference of the Philippines (CBCP).

The group said they based their endorsement on a series of research, interviews, and data they gathered from trusted sources. They brought the decision to a vote, with Robredo earning the trust of 11 of 15, with three abstentions and one absence.

Read: It cannot be Bongbong

Meanwhile, in a separate statement, Novaliches Bishop Emeritus Teodoro Bacani said that Bro. Mike Velarde’s endorsement of Ferdinand Marcos Jr., son, and namesake of the late dictator, for president, is his own, and not by El Shaddai.

Bacani said he will not support Velarde’s endorsement because he found it “very wrong.”

“If there is someone we should not vote for as president, that is Bongbong Marcos,” the bishop said. (JJE, RVO)