MANILA — Environmental defenders are under attack.

Barely two months after the national elections that catapulted the son of the late dictator, Ferdinand Marcos Jr., into power, environmental groups report an intensification of attacks against farmers, national minorities, and environmental defenders.

“The Marcos presidency commences with a 1,733 percent spike in the number of environmental defenders under attack,” Leon Dulce, national coordinator of environmental group Kalikasan, said in a statement, adding that the last six new attacks involved at least 120 people. 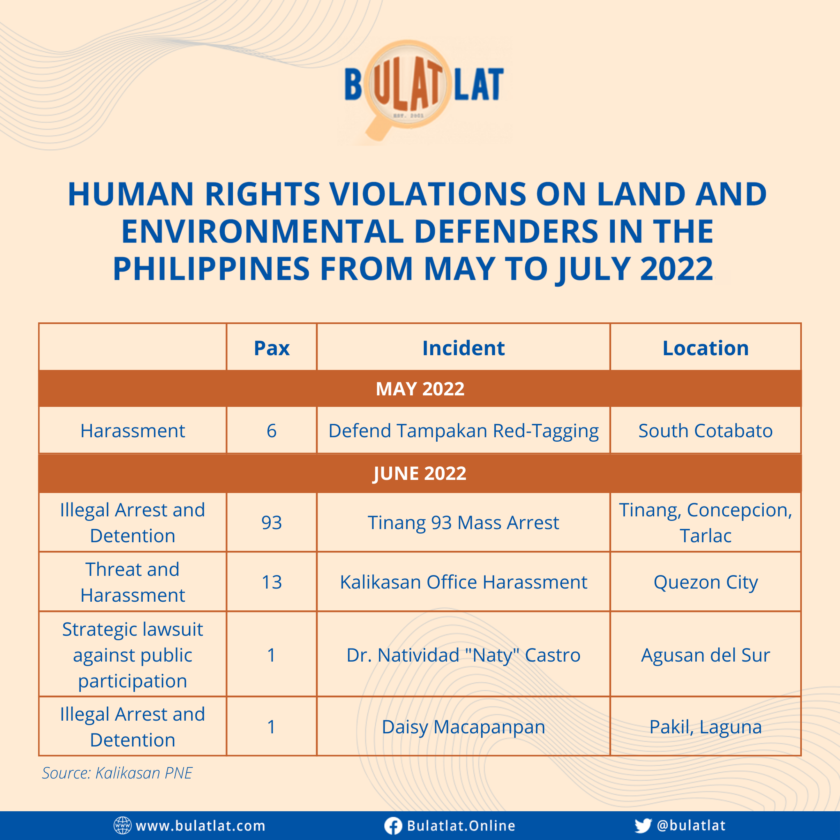 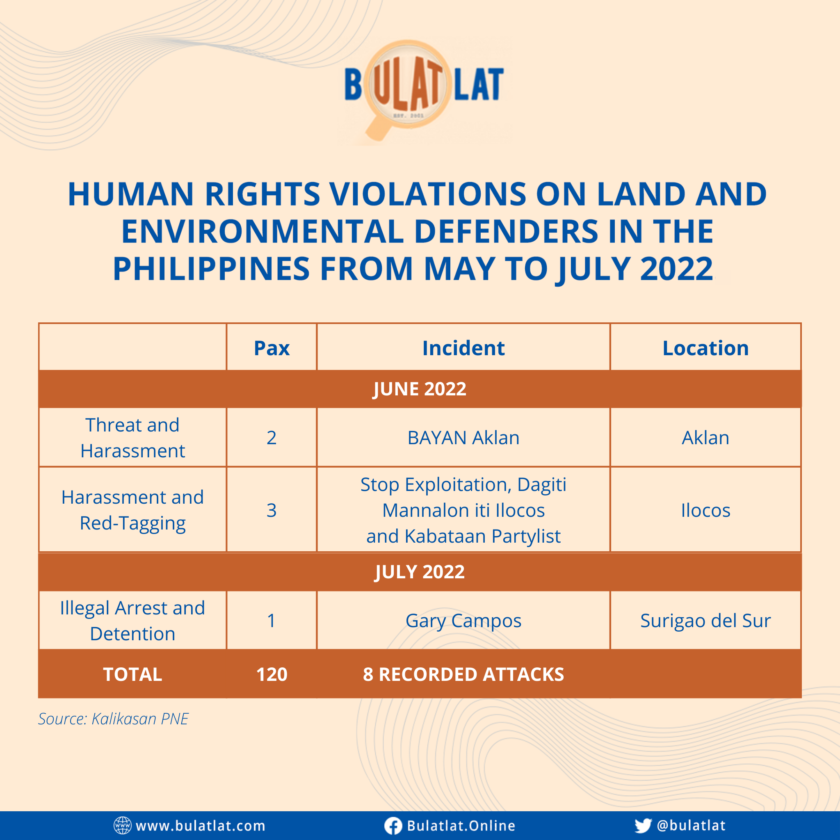 Among the most recent of these cases was the red-tagging and consequent arrest of Gary Campos, a volunteer Lumad teacher. According to human rights group Karapatan-Caraga, he was arrested by the police while heading to a review center in Tandag City, Surigao del Sur last July 17.

He remains behind bars as of this writing.

Read via our mirror site: Attacks on environmental defenders quadrupled in February

Apart from Campos, Lumad people and their supporters have long been routinely subjected to attacks, including the recent re-issuance of a warrant of arrest against freed community doctor Natividad Castro, who has been serving the Lumad community for decades.

“When defenders are arrested, harassed, or even killed – as many have been in the past – communities will be left defenseless. They will suffer the brunt of the destruction from extractive and pollutive projects still planned under the new Marcos administration,” Dulce said.

One of the attacks highlighted by Kalikasan is the arrest of 69-year old environmental activist Daisy Macapanpan last June 11. She is still behind bars after 40 Special Armed Force personnel barged into her home and dragged her outside in front of her relatives. She is known for opposing the Ahunan dam project in Pakil, Laguna.

Meanwhile, in Hacienda Tinang in Concepcion, Tarlac, 93 were arrested and illegally detained by state forces, including farmer-beneficiaries of the 200-hectare land, for charges of illegal assembly and malicious mischief last June 9. These charges were dropped last June 27 for the 83 farmers and advocates who were apprehended at that time.

As most of the infamous ‘Tinang 93’ were freed, agrarian reform beneficiaries filed a complaint against Tarlac Acting Provincial Prosecutor Mila Mae Montefalco for grave and serious misconduct, gross ignorance of the law and procedure, and conduct prejudicial to the best interest of the service.

Threats, red-tagging, and silencing the press

Environmental activists, supporters of environmental defenders, and even members of the press faced attacks and threats from the state according to reports from Kalikasan PNE.

“Around the last week of May, members from the Defend Tampakan network received a malicious remark from rebel returnees that it is acceptable to fight against open-pit mining but not for the advantage of ‘reds’,” their statement reads.

Surveillance and red-tagging are also rampant across the country against those defending their communities against exploitation of natural resources. Some of the cases include surveillance by soldiers of the Philippine Army’s 301st Brigade in Kalibo, Aklan, who were reportedly looking for activists George Calaor and Kim Sin Tugna of Bayan-Aklan.

Another case are reports of red-tagging and surveillance of Genaro Dela Cruz of Alyansa Dagiti Mannalon iti Ilocos Norte, Antonino Pugyao of Stop Exploitation, and Angelica Galimba, former Kabataan Partylist 2nd nominee in the northern part of the country.

Kalikasan PNE and Center of Environmental Concerns (CEC) Philippines are also not safe from these threats.

“On June 13, posters red-tagging progressive partylists were thrown outside Kalikasan PNE and CEC offices by unidentified perpetrators. Before that, on June 9, police forces were performing surveillance operations in the vicinity of the office,” Kalikasan PNE reported.

Read via our mirror site: What you need to know about the blocking of Bulatlat website, 26 others

Kalikasan also included the Securities and Exchange Commission’s (SEC) order to shut down Rappler based on its foreign ownership issues. Media groups have expressed their dismay and condemnation of such action, saying that the shutdown order is a form of censorship.

Call for justice and action

Dulce emphasized that the attacks cause a chilling effect to communities.He called on legislators, members of the judiciary, and the international community to oversee these attacks and risks to human rights that can be inflicted by the new administration.

“These environmental defenders are important because they defend the country’s environment. They are usually at the frontlines, the leader, and when they are killed, threatened, or harassed, our environment will be more vulnerable [from destruction],” CEC Philippines Research and Advocacy Coordinator Jordan Fronda said.

Even before this, the Philippines has been named as one of the deadliest places for environmental defenders for the last eight years. (JJE, RTS)