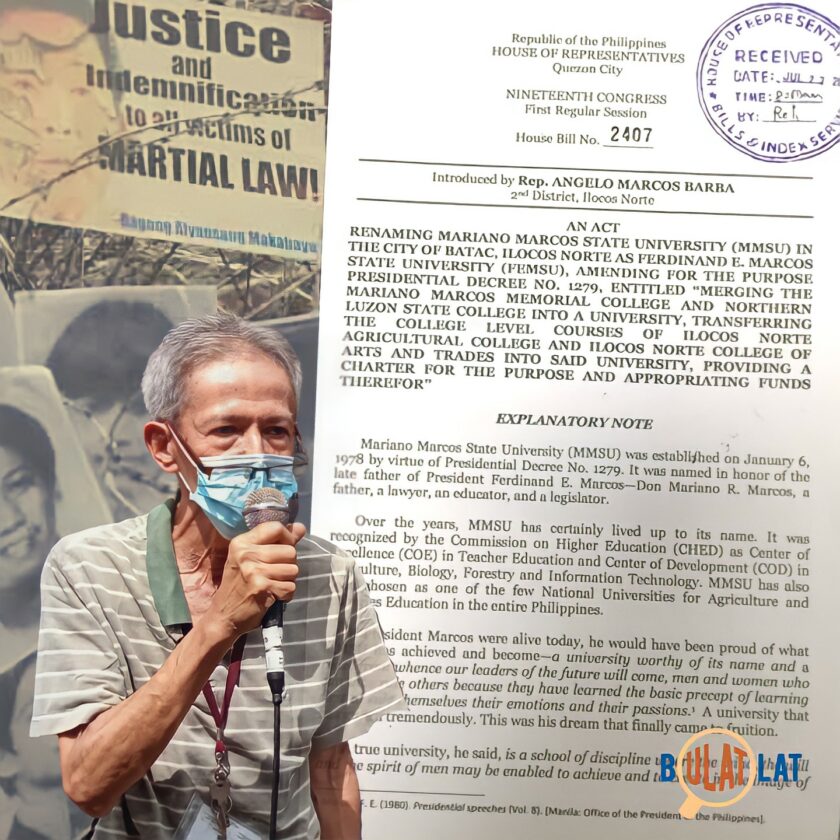 MANILA – A group of martial law survivors decried the proposed renaming of a state university in the hometown of the late dictator Ferdinand Marcos Sr., saying that it was an official government imprimatur to deodorize a shameful legacy.”

“Dedicating an educational institution to a corrupt dictator is casting a shadow on a state university that is supposed to encourage its students to be good Filipino citizens and contribute to nation-building,” the Campaign Against the Return of the Marcoses and Martial Law (CARMMA) said in a statement.

Under the rule of Marcos Sr., human rights group Amnesty International said there were at least 3,257 victims of extrajudicial killings, 35,000 victims of torture, 77 forcibly disappeared, and 70,000 arrests. They also estimated the Marcoses’ ill-gotten wealth to be between $5 billion to $10 billion.

The MMSU, named after Marcos Sr.’s father, was established on January 6, 1978, by virtue of Presidential Decree No. 1279.

It is recognized by the Commission on Higher Education (CHED) as a Center of Excellence in Teacher Education, and Center of Development in Agriculture, Biology, Forestry, and Information Technology Education. The Legal Education Board also recognized MMSU as a top-performing law school in the Philippines in the past years, with a 100 percent passing rate in the 2021 bar examinations.

The proposed renaming of the state university recently got a 7-1 vote before the House of Representatives committee on higher and technical education.

In a separate statement, a group of political prisoners further stressed that there is no legacy to pass on to the generations of students today.

“The only torch being passed around here is their family’s legacy of corruption, nepotism, and conceit,” said Danilo dela Fuente of Selda, a group of former political prisoners.

The martial law survivor also noted that these institutions are not personal properties of those in power.

“The Filipino people shoulder the expenses for these institutions,” Dela Fuente added.

During the house committee deliberations, Kabataan Partylist Rep. Raoul Manuel said the proposed renaming of the state university after the late dictator goes against the supposed recognition and reparation for the victims and survivors of human rights violations during Marcos Sr.’s martial law.

The Republic Act No. 10368 or the Human Rights Victims Reparation and Recognition Act of 2013 was passed as part of the Philippine government’s supposed commitment to acknowledge its “moral and legal obligation to recognize and/or provide reparation to said victims and/or their families for the deaths, injuries, sufferings, deprivations, and damages they suffered under the Marcos regime.”

“An institution built to provide accessible and quality education to the public should not be named after the person who enabled the tuition deregulation and other fees in private educational institutions, and particularly the commercialization of education,” Manuel added. (JJE, RVO)