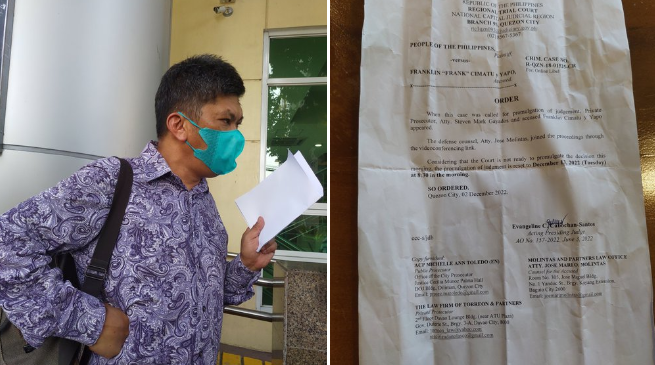 MANILA — Quezon City Regional Trial Court (QC RTC) Branch 93 has reset the promulgation of the cyber libel case against Baguio City journalist Frank Cimatu, saying that the Court “is not ready to promulgate the decision.”

Cimatu is facing cyber libel charges filed against him by former Agriculture Secretary Emmanual Piñol, which stemmed from journalist’s allegedly Facebook post back in 2017, “Agri sec got rich by P21-M in 6 months. Bird flu pa more.”

The National Union of Journalists of the Philippines (NUJP) expressed their support to Cimatu, who is also the NUJP Baguio chapter’s chairperson. “Just like other cyber libel charges, the case against Cimatu is clearly meant to harass journalists.”

The group said journalists in other provinces are also experiencing the same plight, citing the case of journalists Darcie de Galicia and Noel Alamar have been charged by Quezon Gov. Helen Tan and husband Ronnel Tan with 941 counts of cyber-libel over an interview they made during their online broadcast.

They also called on UN Special Rapporteur on Free Expression Irene Khan, who is scheduled to visit the Philippines next year, to look into the weaponization of libel and cyber libel to repress the media.

“NUJP reiterates its demand for the decriminalization of libel. Defamation laws in the Philippines are inconsistent with the International Covenant on Civil and Political Rights,” said NUJP, adding that no one should be punished for expressing their opinion, or for publishing reports about legitimate issues.

The promulgation of judgment is moved to Dec. 13. (JJE)