As Workers Reel from Layoffs, They Find Enemy – Not Ally – in Labor Department

The workers recalled why they went on strike last year: 43 of their members were forcibly laid off, and the votes they cast in the certification election officiated by DOLE was not counted but segregated. After they went on strike, the 43 made it back to Advan. But until now, the votes they cast still await counting. “DOLE has sat on it for almost a year now,” the workers lamented.

Another officer from a union in a Goldilocks bakeshop bitterly talked about their union’s “empty” victory. “We won the case we filed against Goldilocks, but it has not yet been enforced.”

“Decisions on labor cases have no teeth if it favored the workers. But the government is swift in enforcing it if it were more advantageous to employers,” said Ben Perez, President of Alliance of Genuine Labor Organizations (ANGLO), a federation affiliated with Kilusang Mayo Uno (KMU-May First Movement).

These are just some of the reported cases, said KMU. 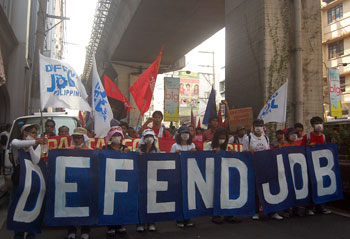 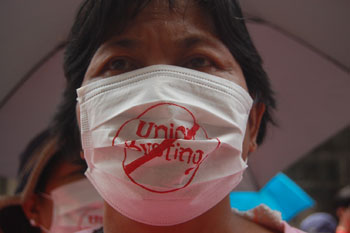 Along with retrenchments such as those affecting Triumph’s 1,660 workers and the 18,000 recorded layoffs from April to June in special economic zones, KMU chairman Elmer “Bong” Labog said “numerous company moves are posing serious threats to union recognition and CBA gains of workers. The government, especially the DOLE, should act now – not when the workers have already been removed from their jobs.”

KMU cited the threat of massive retrenchment and job losses among North Harbor’s 7,000 port workers and vendors as the port is being privatized, in local plants of Wyeth and Pfizer affecting its 3,000 workforce as a merger looms this September, in Advan shoes, Goodyear tires, KFC food chain, among others.

“With the continuing wave of retrenchments, there can be no ‘economic rebound’ for workers, contrary to what Finance Secretary Teves is claiming. We, instead, are bound to suffer far worse conditions with the Arroyo regime’s inaction on our demand to stop layoffs and massive contractualization,” Labog added.

“DOLE itself has foreseen 200,000 lay-offs by mid-year, but instead of acting to prevent it, DOLE has advocated and legitimized flexible labor measures for business owners, thus worsening the situation of workers,” said Labog.

“Beyond guaranteeing job security, government should provide the people with decent jobs that meet our social needs,” Labog added.

“So much has to be done in our country, yet there are no jobs for the people. Food should be produced for all, children should be sent to school, homes should be built for the homeless, the environment should be protected and nurtured.”

Anakpawis Rep. Joel Maglunsod joined the rallying workers in front of DOLE last Wednesday. He reiterated that since the start of the recent global financial and economic crisis last year, they have warned against treating the workers as sacrificial lambs. Yet, as the crisis unfolds, that is exactly what is happening. Rep. Maglunsod said not even a peso went to workers or the poor in Arroyo’s so-called Economic Resiliency Program.

As not much help seems to be forthcoming from the Arroyo regime, the unions turned to politicians jockeying for positions in 2010 elections, saying they should clearly state their platform for workers and for job creation.

They reminded the presidential wannabes and other politicians seeking public office that instead of thinking of tactics on how to beat opponents in surveys, “it will be better for them to support the workers’ struggle to defend jobs and livelihoods.” (Bulatlat.com)