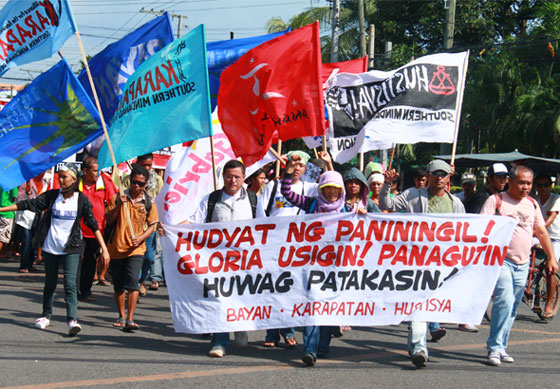 At least 7,000 protesters from the church, lawyers, media, teachers and the basic sectors led by Bagong Alyansang Makabayan in Southern Mindanao marched to commemorate the 61st International Human Rights Day in Davao City, December 10. They condemn the sorry state of the human rights situation in the region and in the country.

On top of the Maguindanao carnage, the Arroyo regime has to answer for the numerous rights violation here in Southern Mindanao touted as the priority target of the second phase of the regime’s Oplan Bantay Laya (OBL) to supposedly end insurgency by next year. 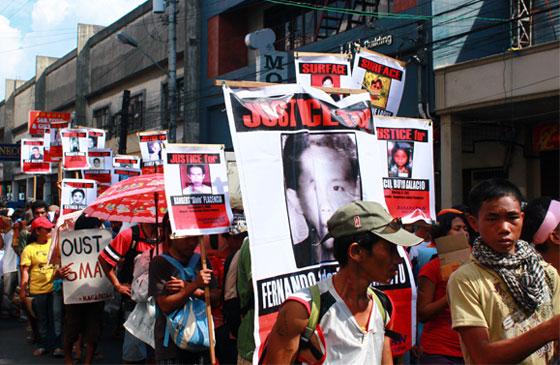 With 116 victims of extrajudicial killings and 13 enforced disappearances in the region since Arroyo came to power, Oplan Bantay Laya is “the bloodiest, most brutal and most barbaric counter-insurgency campaign unleashed on the Filipino people by any president,” according to the 2009 Human Rights year-end report of Karapatan-Southern Mindanao.

Karapatan pinpointed that with the creation of the AFP’s 10th Infantry “Agila” Division in August 2006, statistics rose fast, with half of the figures or 58 persons allegedly killed by 10th ID-AFP agents. The human rights situation in Southern Mindanao in 2009, according to Karapatan,  further proves that state terrorism is a “national policy with the Agila Division serving as the prime killing machine” of the Arroyo government. (Photos by T.W. Trinidad)