MANILA — “I chose to serve the country and the people and fight against the present fascist and decadent system. I already accepted that I would most likely be killed, like my other comrades who became victims of extrajudicial killings. It does not matter how long you have lived, what is important is what you have done to serve the people and the country,” said Kathrina R. Castillo or Kat to some friends and comrades.

Castillo recently received a letter containing a death threat and a black ribbon. The letter read, “Your alliance with the enemies of democracy, progress and peace-the CPP-NPA-NDF and its partylist is also an admission that you are one of them.” It also read, “With this letter is a black ribbon that will remind you that your life, as well as your family, is only a privilege. If death becomes you may you rest in peace.”

The letter that was sent to her was the first direct threat she received from the military. She said, being a nominee of the Kabataan Partylist made the military even more furious. She said it was the 8th Infantry Division that sent her the death threat. Ever since she became the legal counsel of the alleged “high-ranking” members of the underground group, Castillo said, elements from the 19th Infantry Battalion and Military Intelligence Group started to build a dossier on her. 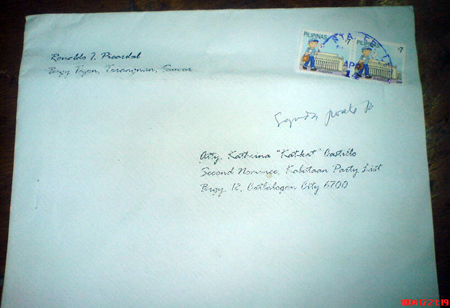 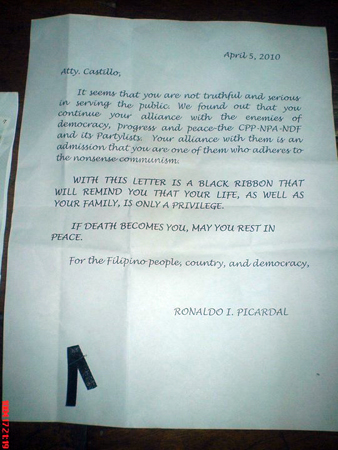 “These military agents would ask the political detainees what my role is in the movement,” Castillo said.

In December 2009, she was told by a friend that the Intelligence Service of the Armed Forces of the Philippines (ISAFP) dispatched a team to look for her. “I confirmed it when in January 2010 an ISAFP member went to the Comelec Regional Office in Tacloban asking where I live. In February, another member of ISAFP looked for me at the Leyte Provincial Office. Another military team went to my place and said they were there to arrest a woman who exactly fits my description,” said Castillo.

This red baiting on her began when she declined an invitation from the 8th Infantry Division to be a guest of honor and guest speaker in their Monday program inside Camp Lukban. Instead, she wrote an open letter to all members of the Armed Forces that discussed human rights. General Arthur I.Tabaquero, commanding officer of the 8th Infantry Division, responded to her letter.

In February 2010, when the military learned that she is a nominee of the Kabataan Partylist, the military produced an alleged rebel returnee who accused her and Kabataan, on radio, of being part of the NPA.

Castillo’s parents wrote a letter to the radio station complaining about the character assassination against her and her group. After four days, they received the death threat. Castillo exposed the death threat in the same radio program. As expected, the military denied that they threatened her countering that she only made up the letter to be famous.