You Are Here: Home → 2010 → August → 14 → NDFP Questions Sincerity of Aquino Government in Pursuing Peace Talks but Still Open to Resumption

The NDFP expressed disappointment over Aquino’s insistence for a prolonged ceasefire before holding peace talks. The NDFP said it is a violation of The Hague Joint Declaration of 1992.

The Hague Joint Declaration defines the agenda for the negotiations between the Government of the Republic of the Philippines (GRP) and the NDFP namely human rights and international humanitarian law, social and economic reforms, political and constitutional reforms, and end of hostilities and disposition of forces. 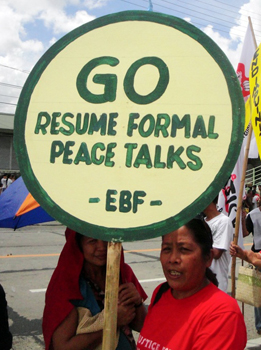 The NDFP also said the ceasefire precondition is ‘reminiscent of the stand of Aquino’s late mother, former president Corazon Aquino who blocked the negotiations on social, economic and political reforms. After the collapse of the peace talks in the aftermath of the massacre of peasants marching to demand for land reform in January 1987 at Mendiola bridge, Corazon Aquino “unsheathed the sword of war”.

The NDFP noted that in his first State of the Nation Address (SONA), Aquino taunted the NDFP for not having any concrete proposals. “It also appears that he is not adequately informed about the concrete proposals that the NDFP has made.”

The NDFP said Aquino totally ignores the repeated demands of the NDFP for accelerating the peace negotiations and the NDFP Proposal for Immediate Just Peace issued and hand-delivered to the GRP Negotiating Panel and the Norwegian facilitator in August 2005 in Oslo. The NDFP has declared that it is willing to receive an emissary or a team of emissaries from the Aquino administration to discuss the steps needed for the resumption of formal talks.

The NDFP also noted Aquino’s adherence to the US Government Counter-Insurgency Guide of 2009, as stated in his April 22 speech.

“The Filipino people must not be deceived by this despicable dual character of Mr. Aquino, where he plays the meek and mild hero on one side and the sinister fascist on the other, with the latter gradually becoming more obvious. Indeed the countryside is teeming with amoy pulbora (referring to trigger happy soldiers) because the new GRP president feigns being deaf on the aspirations of the people for peace that is based on social justice. He prefers to follow the US manual on counter insurgency, and swallow hook-line-and-sinker the advice of his new AFP Chief of Staff Lt. Gen. Ricardo David, who once again day dreams to wipe out the NPA in three years,” the NDF-Mindanao said in a separate statement sent to Bulatlat through email.