According to the team’s report “Even supposing that it was the NPA who were on the ridge and the military was positioned at a higher vantage point – which was difficult to reach – to the east, there were no indications of any bullet hitting the higher vantage point from the direction of the ridge.”

The fact finding team measured the distance from the tree where Co and his group were working to the vantage position of the military. It is only about 50 to 60 meters. (Refer to video below.) The distance from the military’s position to the parking area of W403 pad is only 200 meters. Thus, the team concluded, it was impossible for the soldiers not to see and hear Co and his companions.

Tutaan told the fact finding team that his unit’s operation was legitimate because it was authorized by the command of the brigade.

But based on the team’s observations during the site visit, the following were concluded: The direction of the bullet marks on the trees originated from a vantage point on the ridge above Co and his team; the direction of fire was concentrated on the area where Leonard and his four other companions were standing; Tree no.4 was hit three times and the large tree where Gibe hid had six bullet marks. 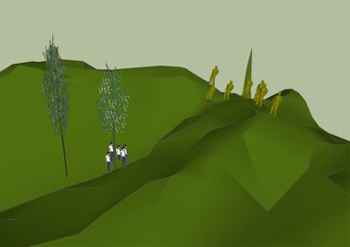 Click here to view the mapping and other observations provided by the fact-finding team.

Tutaan said his unit has been closely coordinating with the EDC for quite some time because the area outside the EDC complex, around 10 to 12 kilometers away, is a known “play ground” of the NPA. Tutaan said they follow a “protocol” with the company. However, Tutaan did not elaborate on the supposed protocol. He also said information about their combat operations are regularly shared with the EDC.

However, Manuel Paete, EDC resident manager, said that on Nov. 15 they did not receive any report from the military nor were they informed that there was an operation by the military.

Mayor Elmer Codilla of Kananga, Leyte also said there were reports that NPA guerrillas are roaming within the vicinity of EDC. Cadilla, however, could not answer how they verified such reports.

But Borromeo’s family, who are residents of barangay (village) Tongonan, Ormoc Leyte, said they are not aware of the presence of the NPA in the area.