MANILA — A group of human-rights lawyers has vowed to take what it called a “legal offensive” to curb impunity and advance the cause of human rights in the Philippines.

In line with this, the National Union of People’s Lawyers (NUPL) launched its “Stop Impunity” campaign on Jan. 27 in Quezon City.

”Practically no one has been held accountable, even as state security forces are the ones suspected to be involved,” Olalia told the audience. “Justice has not been meted out simply because the crimes have been practically sanctioned by the state,” he added. 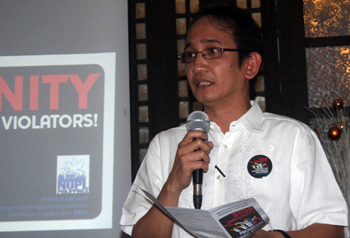 A study by The Asia Foundation in August 2005 reveals that only four cases of EJKs have had court convictions, with only 1.05 percent conviction rate in a span of nine years. According to the same study, from a base figure of 305 reported EJK incidents, 32 percent of victims were activists and 15 percent were journalists. Other victims include lawyers and judges, seven percent; and the religious, three percent. More than half of the cases have unidentified assailants. Of the identified assailants, most come from state security forces.

“Perpetrators have to be prosecuted, tried and duly punished. It’s not business as usual. It is time to hold them accountable,” Olalia said.

The NUPL vowed to bring perpetrators to justice by actively filing criminal, and administrative and disciplinary actions against them.

Formed in September 2007, the NUPL has represented activists facing criminal charges such as the 43 health workers and victims of abductions and torture in filing writ of amparo petitions.

“The battle against impunity is the concern of all,” Bayan Muna Rep. Neri Javier Colmenares, former NUPL secretary-general, said in his speech. “With impunity, justice for the victims remains a dream.”

Colmenares said that impunity continues to threaten victims, relatives and human rights defenders. “Another implication is that because the criminals are still there, the crimes will be repeated again and again, having more victims and with crimes becoming more atrocious.”

Colmenares illustrated the impunity in the country by citing Maj. Gen. Jovito Palparan Jr. The Melo Commission, a government created commission tasked to investigate EJKs, itself said that Palparan must be held accountable under the principle of command responsibility. The Supreme Court, in its decision in the amparo petition of the Manalo brothers, states that Palparan has tolerated and participated in the abduction and torture of the two brothers. 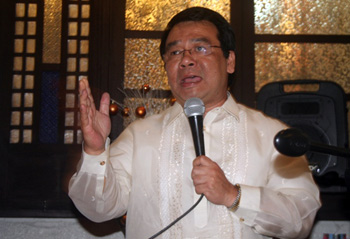 “The battle against impunity is a battle to be humane in the midst of inhumanity,” Colmenares said.

The campaign aims to build an advocacy and support network from the academe, church, media, people’s organizations, human-rights groups –- both local and international -– for the prosecution, trial and punishment and perpetrators of human-rights violations.

The group said it will produce campaign materials and use new media to raise awareness on impunity.

As part of the campaign, the NUPL launched in October 2010 a photo competition entitled “Shoot!,” a photo contest capturing the struggle for justice of victims of human-rights violations. The awarding was held during the launch of the “Stop Impunity” campaign. (See: Photo Contest Highlights Fight Vs. Impunity in Philippines)

Roan Libarios, incoming national president of the Integrated Bar of the Philippines (IBP), thanked the NUPL for taking the initiative in undertaking such “big move.”

“Stopping violence and impunity is a defining issue for all members of the legal profession,” Libarios said.

Libarios said the IBP is open in having an active partnership with the NUPL in this endeavor. He said he would issue a memorandum for all local chapters to coordinate with NUPL. “On major cases, we can assist in ensuring effective prosecution of human rights violations,” Libarios said.

Jessica Evans, representative of the New York-based Human Rights Watch in the Philippines, congratulated the NUPL for launching the campaign. Evans noted that while the new administration has “some positive changes in language, investigations and prosecutions are not happening.

“The protection still exists for the members of the military,” she said, citing that those responsible for the arrest and detention of the 43 health workers have not been punished.

A group of families of the disappeared also welcomed the NUPL’s move.

“We have seen their sincerity and their bias for the victims,” said Lorena Santos, deputy secretary-general of the group Desaparecidos and daughter of missing National Democratic Front of the Philippines (NDFP) consultant Leo Velasco. “They have joined us not only inside the courts but outside the courts too,” she said.