A Year After Ordeal, Life Goes on for Freed ‘Morong 43’ But Scars Remain

A year ago today, the military and police illegally arrested and detained the “Morong 43” health workers. While most of them have been freed and are now trying to pick up the pieces of their lives, many  still have nightmares and still feel  vulnerable and exposed to danger. 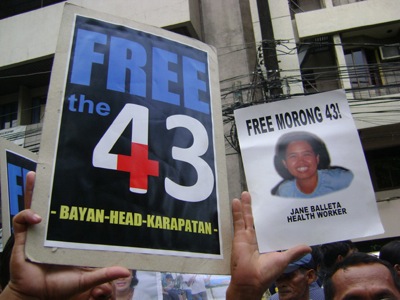 ‘Morong 43’ Recall the Nightmare and the Struggle

MANILA – Physically they are already free, they appear fine and they are picking up the patterns of their old life, but many of the Morong 43 health workers today seem to be still struggling with the memory of their abduction exactly a year ago today, Feb. 6, and their subsequent torture and detention.

“I still can’t sleep well,” said Dr. Merry Mia-Clamor, one of the Morong 43 who was released last December. Even when she manages to sleep, it is fitful at best. She told Bulatlat.com that what she is going through is common among the Morong 43 health workers. She still has nightmares when she is alone in the dark. She dreams of soldiers seizing one of them and spiriting a detainee out of jail in the dead of the night.

While most of them have gone back to work by now and are coping well with it, Dr. Clamor says, she still feels vulnerable whenever she is out in the street. The other freed health workers interviewed by Bulatlat.com also said they feel the same, although they are also quick to reassure everybody who asks that they are fine.

Lydia Obera, the eldest female Morong 43 detainee, told Bulatlat.com that, “Personally, I feel I’m okay. Everything is as it should be, as natural as can be.” She asked other health workers to tell her if they noticed something different with her. “They said I was just like before.”

At 62, Obera is slim, sprightly and cheerful. A gentle, fun-loving Waray, Mama Del, as she is affectionately called in the health sector and by the inmates at Camp Bagong Diwa detention facility, had for some reason been accused of illegal possession of firearms and of having violated the Comelec election gun ban a year ago. Mama Del is one of the health staff of the Alliance of Health Workers (AHW). 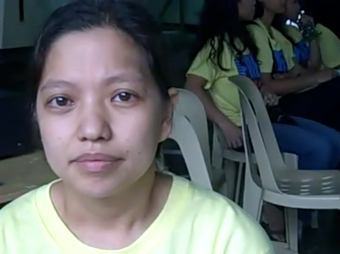 “My memory seemed to have sharpened,” Mama Del said. In fact, she said, she could now recall cellphone numbers, which she had difficulty doing before her arrest. Like the other members of the freed Morong 43,  she said, she gets her strength from the warm welcome and support of friends, family, colleagues and all those organizations whose members visited them while they were in jail.

“When I visited the public hospitals where the members of the Alliance of Health Workers (AHW) are working, their welcome was truly heartwarming,” she said.

Mama Del no longer has nightmares; she said she only had them when she was in solitary confinement, which lasted 14 days, at Camp Capinpin. Others in her neighboring jail cell would try to wake her up when she was having those nightmares. “I was shouting in my sleep: ‘Why did you arrest us, we did nothing wrong!’”

Today, Mama Del’s eyes sparkle as usual when she animatedly tells stories about the good things that they managed to do even when they were in jail. But she apologetically admits that she still can’t shake off the feeling of vulnerability as she goes about her day-to-day activities. She said she feels that something bad might still be inflicted on her or to her loved ones, or that she might be slapped with yet another trumped-up charge by the military. 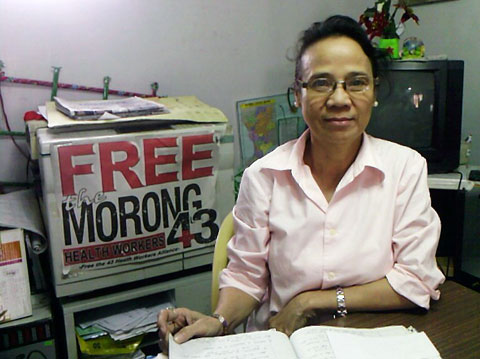 Lydia “Mama Del” Obera, back at work: “Everything is as it should be.” (Photo by Marya Salamat / bulatlat.com)

“I never cried while I was in jail, not even at Camp Capinpin,” she said. She only shed tears of happiness when they won their freedom last December. But the memory of Camp Capinpin, where “mornings are so quiet you could hear only the chirping of birds,” can spoil her mood.

“I don’t want to go back to what happened in our health training in Morong and at Camp Capinpin. It makes me furious,” Mama Del said. It seems to remind her as well why she continues to feel  vulnerable.

The same feeling of vulnerability or of being exposed to danger from the military marks the trips to and from work by Gary Liberal. An operating-room nurse at the Jose Reyes Memorial Medical Center (JRMMC), Gary, 44, has been at JRMMC for 20 years at the time he went to Morong, Rizal, on this day last year to serve as resource person in the training.

He, too, had been warmly welcomed back in the hospital by his co-employees. “So far, there’s been nothing untoward about my going back,” Liberal said. He resumed working as head operating-room nurse at JRMMC last January 17. He also reassumed his position as president of the employees’ union in the hospital. 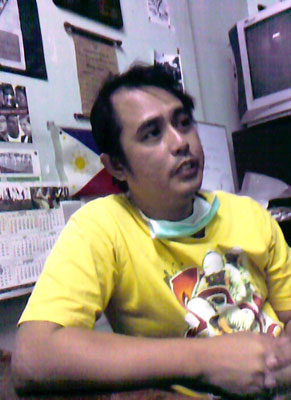 Gary Liberal, at the JRMMC: “Things are the same.” (Photo by Marya Salamat / bulatlat.com)

“The adjustment back to work had been easy – things are the same, there are the usual numerous patients to attend to, the usual SOPs (standard operating procedures). There were only slight changes in SOPs since I’d been gone, but essentially the mechanics are the same. There are now a few new colleagues here, too,” Liberal told Bulatlat.com.

Even if working in a public hospital is neither subversive nor illegal, Liberal said, he had received advice from well-meaning doctors to just go out of the country for his security. Freed along with the other Morong 43 last December, with all charges against them dropped, the concerned doctors nevertheless told him that “when the military has arrested you, it is like your head has been marked”.

Indeed, he could clearly remember how the military interrogators at Camp Capinpin had told him that “we know where you are working; where you live. When you get out, we can easily follow you. We can kill you even when you have been released.”

Today,  Gary Liberal, Lydia Obera and Dr. Merry Mia-Clamor intend to resume everything they used to do as health workers before their arrest happened. Liberal said he is still willing to become a resource person in health trainings, though, jokingly, he said he prefers that it be conducted within Metro Manila. (Because their health training last year was held in Rizal, Liberal traveled to the place the night before his scheduled topic to avoid being late. The next morning the training was raided.)

They are trying to cope with insecurity when out alone by being attentive to their surroundings. Some, said Dr. Clamor,  are consulting psychiatrists to help them cope with the trauma. 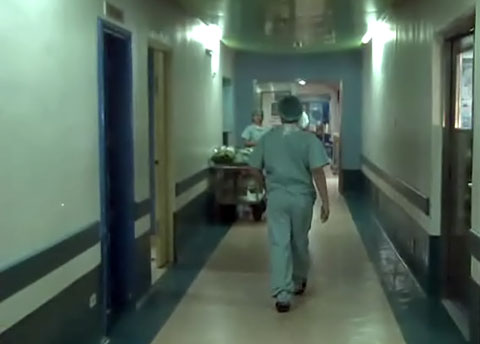 Gary Liberal on his way to the operating room at the JRMMC.(Photo by Marya Salamat / bulatlat.com)

All of them are fervently grateful for the outpouring of support from local and international organizations. These have strengthened them in their struggle for freedom. They are also grateful for the warm welcome that greeted them.

They lost 10 months of what would have been their normal life with their family, work and organizations. During those 10 months, Liberal, for instance, did not earn anything from JRMMC, even if it was not his fault that he was prevented from reporting to work.

While the probability of receiving compensation for the lost 10 months of their lives is still far-fetched – the military has so far refused to even apologize – the released health workers have to deal every single day with the dark memories of their illegal arrest, detention and torture.