MANILA — Contrary to the report of the Department of Justice (DOJ) and the National Bureau of Investigation (NBI), a survivor and the local police maintained that there was no crossfire in the killing of botanist Leonard Co and his companions, Sofronio Cortez and Julius Borromeo.

Ronino Gibe, the 24-year-old forester contracted by the Energy Development Corporation (EDC) testified, during the second public hearing of the Commission on Human Rights (CHR) last Feb. 21, that there were no other armed groups in the area and that there was no crossfire

Gibe said that on Nov. 15, 2010 at about 9:00 a.m. when the burst of gun fire started, there were only five of them in the area plus the group of armed men who fired at them. “We were surveying tree no. 4 when the gun fire started. It was sporadic as if there was a rain of bullets. I did not hear any warning shot before that.”

He said that when the firing started they were all shouting that they are not enemies. The firing stopped after 20 minutes. It was only after the firing that he had the opportunity to check on his companions.

When a soldier approached the tree where he was hiding, Gibe came out raising his hands. He was asked where his two other companions were and where was his firearm. “I said I did not have a firearm and we were working for the EDC,” he recounted. 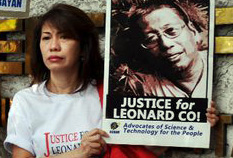 He was instructed by one soldier to lie down facing the ground with his both arms in his back. “They said lie down, be quiet, turn my head to the side and close my eyes.” He said he pleaded with the soldiers to bring his companions to the hospital, because at that time Borromeo was still alive. But the soldiers took their time talking to one another, quite far from where he was lying. “I was there lying for two hours while I pleaded with the soldiers.”

Gibe who was obviously nervous during the hearing requested that no photograph of him be taken by the press for his security and for the peace of mind of his family.

“There was no crossfire based on our thorough investigation, your honor,” Sosito said.

Sosito said they concluded that there was no encounter that happened between the New People’s Army (NPA) and soldiers of the 19th Infantry Battalion. In their report, the DOJ and the NBI claimed that Co and his companions were killed by the NPA.

Dr. Raquel Fortun, a forensic expert who did the autopsy on the bodies of Co and Borromeo, said she disagrees with the conclusion of the DOJ-NBI. “I have not seen evidence that there were indeed another set of shooters or different shooters [other than the 19th IB] who could have shot at Mr. Co.” During the first public hearing held in Tacloban , Leyte last January, Fortun said the physical evidence, including cartridge casings that matched with the firearms of the soldiers, scene findings and autopsy findings, support the accounts of the witnesses who survived the shooting.

However, the NBI stood by their report that members of the NPA and not the soldiers of the 19th IB who killed the botanist and his two companions.

Rizaldy J. Rivera, special investigator of the NBI and member of the fact-finding team said they based their conclusion on the reconstruction of the incident and interview of the witnesses. However, the claims of the survivors Policarpio Balute and Ronino Gibe contradicted the DOJ-NBI report that there were other armed forces in the area.

However, Rivera also said that their report is conclusive.

Rivera also explained that the commander of the battalion Lt. Col. Federico Tutaan said there were only nine soldiers who were engaged in the fire fight that is why they only submitted nine firearms. Rosales said the NBI should take control of the investigation. Rivera reasoned out that they were given only 30 days to investigate. To complete the report they requested for an extension of 15 days.

Rivera also claimed that given the position of the soldiers, it is impossible to hit the victim from their (the soldiers) upper ground position.”

Meanwhile, the EDC washed its hands off any accountability but admitted that they need to improve their coordination with the military.

“If there is someone who should be held accountable to the deaths of Co and his companion, it is not the EDC. If the military only told us that they would be going there this should not have happened,” Manuel Paete, resident manager of Leyte Geothermal Production Field of EDC, said.

Paete also said if the security threat is within the complex, the military should inform the EDC, but if the threat is outside, the military need not coordinate with them. “It was the negligence of the military for not informing us that they were going to pad 403 where the team of Co was killed.”

Paeta said there is a memorandum of agreement and security protocol with the 19th IB.

The intelligence report on Nov. 12, which claims that there were sightings of the NPA in Carigara, which is six kilometers away from the EDC complex, reached the EDC security. However, the reported sightings were not verified.

The EDC remained on alert level one. Alert level one, according to Retired Real Admiral Ferdinand Golez, senior manager of the EDC security department, is for petty crimes. Alert level two is raised when there is a demonstration, rally or unrest among the employees and third is for an external threat, which may be an attack from certain armed groups. “We coordinate with the military when we are at alert level three,” Golez said.

He said that since the intelligence report of sightings was not verified they stayed on alert level one. Paete also said the soldiers did not coordinate with them even if they [the soldiers] were already on alert level three and that they were conducting a combat operation inside the EDC compound.

Paete said they coordinated with the military about the presence of their personnel in the area hours before the Co’s team started with their research. “The military were informed that our personnel were in the area (EDC). There is a protocol that is operational. It is just that they did not inform us that they were operating since November 13 and 14, 2010.”

Meanwhile, Co Lian Seng, father of Co who came all the way from the south of Manila to attend the hearing, said, “There were hundreds of bullets that were fired at my son’s team. They should be given justice. We took care of our son and then they would just kill him. It really pains us.”