MANILA — The family and relatives of slain botanist Professor Leonard Co and their supporters, led by groups Advocates of Science and Technology for the People (Agham) and the Justice for Leonard Co Movement, successfully conducted a forum-fundraising activity dubbed “Lugawan for the Justice for Leonard Co campaign” on Friday in Balay Kalinaw, University of the Philippines (UP) in Diliman. Organizers served “lugaw” or rice porridge for P100, P500, P1000 and P2000 a bowl.

Students, former colleagues of Co, as well as newly-installed UP President Alfredo Pascual, who delivered a speech in support of the campaign, also attended the activity.

Before he was installed as UP president, Pascual was the president of the UP Alumni Association. He said that when they heard of what happened to Co, they immediately released a statement expressing outrage.

“We hope that the process will be sped up so that the family and all of us can achieve closure. We hope that the DOJ [Department of Justice] will uphold the true findings behind what happened. We cannot tolerate what was done to Leonard and the other victims. I commiserate with his family in their cry for justice. I hope we all stay together in this cause,” he said. 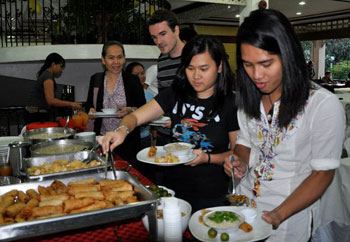 All the funds generated by the ‘lugawan,’ will be used for the campaign for justice for the killing of Co and company. (Photo courtesy of Philippine Native Plants Conservation Society, Inc. / bulatlat.com)

Co’s brother in-law, Bobi Austria, said the family and their supporters were determined to see that justice is attained for the slain botanist until the very end, but added that there were also practical considerations to attend to.

“At this point that the preliminary investigation into Leonard’s case is slated to begin at the Department of Justice (DOJ), we are in deep need of funds. The photocopying alone of the documents needed for the case will require a minimum of P50,000 ($1,143) according to our lawyer,” Austria said, referring to the family’s counsel Evalyn Ursua who is handling the case.

Support groups have also printed ‘Justice for Leonard Co’ shirts, which are now being sold for P200 each. All proceeds from the sales, as well as the funds generated by the ‘lugawan,’ will be used to pursue the legal case the family filed.

Austria said the entire family is grateful for all the help they have been receiving from their supporters that included environmental groups such as the Philippine Native Plants Conservation Society Inc. (PNPSCI), Kalikasan-PNE, the Center for Environmental Concerns (CEC), Agham-Youth, and the Health Action for Human Rights.

“The ‘lugawan’ would not have been possible if not for their efforts and we are truly grateful. We can only hope that they will not grow tired of supporting us as we continue to fight for justice for Leonard and the other victims of the Kananga Massacre,” he said.

Co-convener of the Justice for Leonard Co Movement and Agham chairman Dr. Giovanni Tapang shared highlights of the ongoing campaign. He narrated the salient points that were raised during the recent committee hearing sponsored by the Commission on Human Rights (CHR) wherein it was affirmed that Co and his companions were shot at and killed by members of the Armed Forces of the Philippines (AFP).

UP College of Mass Communications Dean and nominee for the position of UP-Diliman chancellor Dr. Roland Tolentino gave his support in behalf of the UP Kilos Na, an alliance of progressive organizations of teachers, students, non-faculty staff and residents of the UP-Diliman community.

“We want the greatest number of people in the UP Diliman community to be aware of what happened to Professor Co and the campaign to attain justice for his killing. Professor Co was a teacher and a researcher who devoted his work and knowledge in service to the country,” Tolentino said.

The Singular Authority on Floral Biodiversity

The PNPSCI mourned the fact that Co was killed during the International Year of Biodiversity. It was ironic, the organization said, that Co and two of his companions, while collecting seedlings of endangered trees for reforestation, fell from a hail of gunfire “fired upon by the very elements sworn to protect Filipinos.”

The PNPSCI, in their tribute, said that Co possessed first-hand knowledge of floral biodiversity that can never be found in any literature.

“He spent a lifetime exploring and gathering precious data on the rapidly diminishing forested regions of the country. No one understood our native forest dynamics the way that he did. He provided a glimpse into its hidden order and where one would see just endless green, he would expound on the complex interrelationships between one living thing to another. He is, quite simply, the singular authority on Philippine floral biodiversity.”

In the meantime, the DOJ has already replaced a government prosecutor it previously assigned to investigate the murder complaint the Co family filed against officers of the 19th Infantry Batallion (IB) of the Philippine Army, whom they alleged are responsible for the killing of Co and his two companions Sofronio Cortez and Julio Borromeo in Kananga, Leyte, on November 15.

Justice Secretary Leila de Lima made the admission that the DOJ erred when it appointed Assistant State Prosecutor Bryan Cacha to the panel that would conduct the preliminary investigation on the complaint. She said Cacha was replaced because he also conducted a fact-finding investigation into the incident, which exonerated officers of the Army’s 19th IB for the killing.