Cutting Back on a Meager Budget to Cope with Soaring Prices

Menyer Ligmon’s family budget of $8 a day is spent for one and a half kilos of rice, $0.46 for the snack of each of her six children, who are attending school, $0.46 for one fourth kilo of sugar, $0.46 for kerosene gas for her lamp for one week .. and the rest for noodles and vegetables, cooking oil, salt and the cheapest milk for her two-year old child.

MANILA – “We are in deeper crisis under this government. Before, I was still able to buy groceries, now I cannot afford it anymore. I don’t want my children to experience this kind of poverty when they grow up,” Menyer Ligmon, 36 said in an interview with Bulatlat.com.

Ligmon could not control her tears when asked how she copes with the increases in basic commodities, transportation fares and utilities. She is separated from her husband two years ago and her five children live with her. 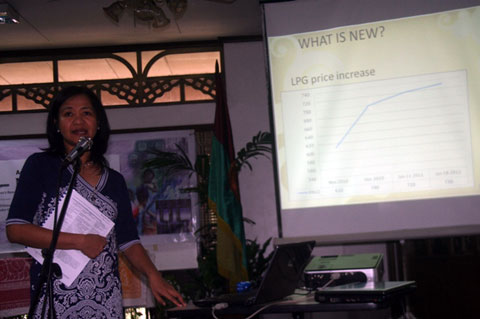 Mary Jo Guan, executive director of Center for Women’s Resources (CWR), said mothers like Ligmon are facing dire poverty under the Aquino administration. “When Aquino won the automated elections last year, the new government gave hope to the people. But eight months after his presidency, the situation of women is getting worse,” Guan said during the presentation of the 9th 9th Ulat Lila (The Purple Report), the group’s report on the situation of Filipino womena.

Guan added that the Aquino administration is merely a continuation of the previous administration of Gloria Macapagal Arroyo. She said the same policies are still being implemented. and many cabinet members are merely “recycled.” ().

Ligmon said her budget of $8 a day is spent for one and a half kilos of rice which is $1.04, $0.46 for the snack of each of her six children, who are attending school, $0.46 for one fourth kilo of sugar, $0.46 for kerosene gas for her lamp for one week since they do not have electricity and the rest for noodles and vegetables, cooking oil, salt and the cheapest milk for her two-year old child.

According to CWR below are the basic commodities that are being bought by mothers and its corresponding prices: 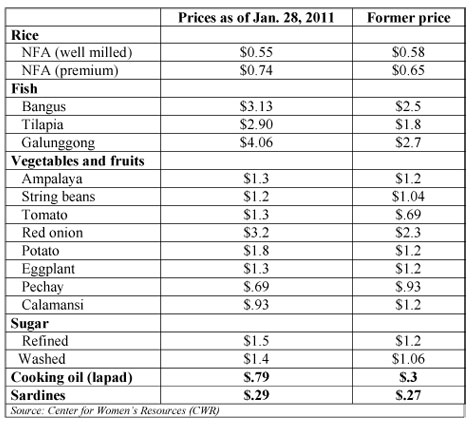 But Ligmon does not have a regular job; she resigned from her previous work as a server in a canteen. “I only earned $3.48 a day, and the canteen is in Makati which is a bit far from Quezon City. My transportation fare is $1.3 a day back and forth. I do not earn enough to buy food and snacks for my children going to school.”

Now, Ligmon is doing laundry and earns $4.6 to $5.8 per laundry –still insufficient to have three decent meals a day.

CWR also said an added burden to mothers is the expanded value added tax or E-VAT. The table below shows how much a mother can save if the E-Vat imposed on basic commodities is remo: 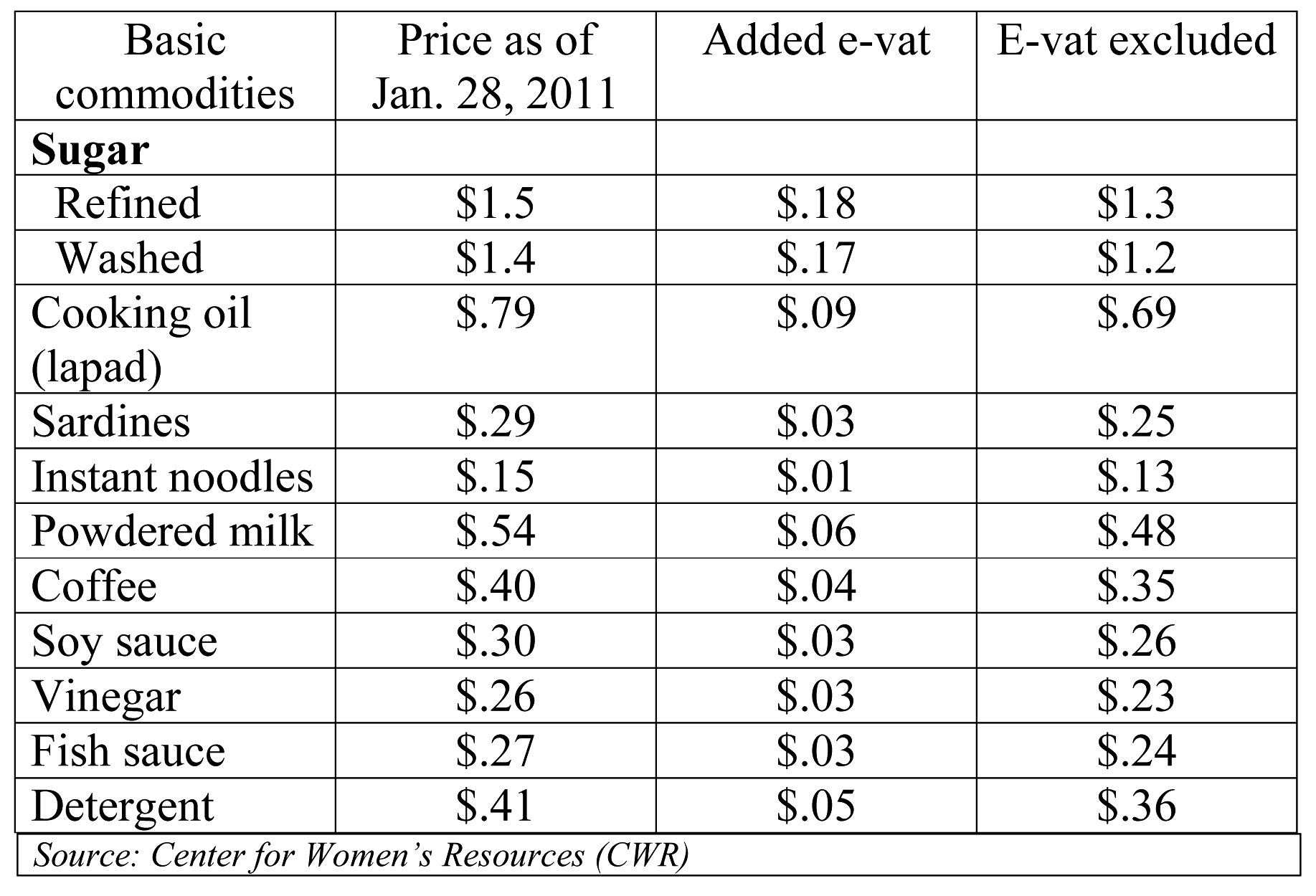 On the other hand, while prices are soaring, the wage of Filipino workers is nailed to the ground. The Department of Labor and Employment (DoLE) said a wage increase is not possible until July since it implemented an “increase” of $.51 last year. The minimum wage in Metro Manila is currently pegged at $9.39 a day.

There are also more and more women, like Ligmon who are unemployed. In the latest Labor Force Survey of National Statistics Coordinating Board (NSCB) in October 2010, there are 2.8 Filipinos unemployed higher by 29.8 percent in just a span of one year. CWR data shows that in 2009, there were only 81,000 Filipinos unemployed. 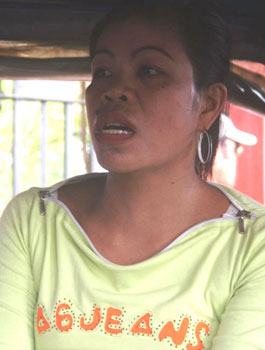 It is not only cooking gas that Ligmon cannot afford to buy; she also cannot afford to pay for electricity and water bills. Since last year, Ligmon has been using a kerosene lamp. She pays $0.46 for kerosene, which she has to budget for the whole week. “We have to do all the things we have to do before it gets dark. My children do their homework immediately after arriving from school, while there is still sunlight. We really have to fit our budget so that we could eat.”

She also did not avail of water services from Maynilad or Manila Water since she cannot afford to pay for it.

“I just have to spend time lining up to get water from one faucet in our community. If you fall in line at 4:00 pm you will reach the faucet at about 12:00 midnight because there are too many of us.” They also get their drinking water from that faucet in their community. She said that, maybe, their stomachs are already used to drinking underground water.

Guan said the privatization policies that were implemented by the government barred Filipino poor families from having access to utilities such as electricity, cooking gas and water. The CWR said Aquino put Filipino families in great crisis by implementing its Public-Private Partnership (PPP) program. “This strategy will only result to left and right increases in prices of commodities, petroleum, water and electricity,” Guan said.

Ligmon said when one of her family members is sick, she just gives them paracetamol. She said there is no use going to the health center since they are only given prescriptions of medicines, which they have to buy.

“I cannot afford to buy the medicines that the doctor prescribes. It is useless because the government allocates a meager budget for health services,” Ligmon said.

She also said that she borrows money when somebody from their family gets sick.

In the latest Family Income and Expenditures Survey, a poor family only spends 1.7 percent on health needs; they spend their biggest budget on food (59.9 percent), housing (9.4 percent) and utilities (6.8 percent). This is why poor families needed basic social services like health from the government. But the 2011 budget shows that the government has other priorities to the detriment of social services.

While there are many issues that women are currently facing, Gabriela’s call is for Aquino to intervene and act decisively to control the prices of basic commodities, transportation fare and rates of utilities and respond to people’s needs like social services.

Because of the crisis, the education of Ligmon’s children is also affected. She said that whenever she is unable to afford to buy the materials for school projects, she tells her children to just do well in quizzes to make up for their failing grade in the project. “Sometimes when they know that I really have nothing to give them, they do not tell me about their needs in school.”

She said her six-year old daughter who is now in kindergarten was not able to have her graduation picture taken because she could afford it. “The toga picture is worth $8.13. That’s already my budget for the whole day. She complained about not having her picture taken, I just told her to let it go.” She fears that her daughter might not also graduate because she could not afford the graduation fee.

She said she has plans of taking her kids to their father back in the province so she can work and save some money in time for the next school year.

Asked if she felt any change for the better under the Aquino government, Ligmon said there has been none. ()

“It is worse under the Aquino administration. I have incurred so many debts. And nobody wants to loan me money anymore because they know I do not have a job. Where will I get the money to pay them? Our situation is really worse.”