“The media blitz being done by Nestlé could no more hide its continued violation of the Supreme Court decisions and other laws in the Philippines so it could continue to deny justice to its workers who are now into their ninth year of strike.” – KMU

MANILA – For years since 2002, unionists at the Philippine subsidiary of the world’s biggest food company Nestlé described the gates of this Nestlé core factory in Asia as a “military garrison.” At that time, the company and the Philippine labor department were using overt military force to subdue the workers’ strike. Nestlé had used as legal basis an assumption of jurisdiction (AJ) order issued by the then labor secretary, an order the unionists claimed was tainted by corruption.

The said strike was used by Nestlé to layoff the strikers, even as it used brute force resulting in bloody, multiple injuries to the strikers and up to now, some still unresolved extrajudicial killings with no less than the Nestlé union president Diosdado Fortuna as one of the victims.

Nine years after the Nestlé union went on strike and the workers were forcibly terminated, with some finding themselves blacklisted in the job market in the area, 48 workers have reportedly died. Most of the workers’ children had been forced to stop schooling, 78 percent of workers’ houses had been forfeited, and 250 workers remained criminally charged for strike-related acts such as defending themselves against police and military blows and defending their picket-line. 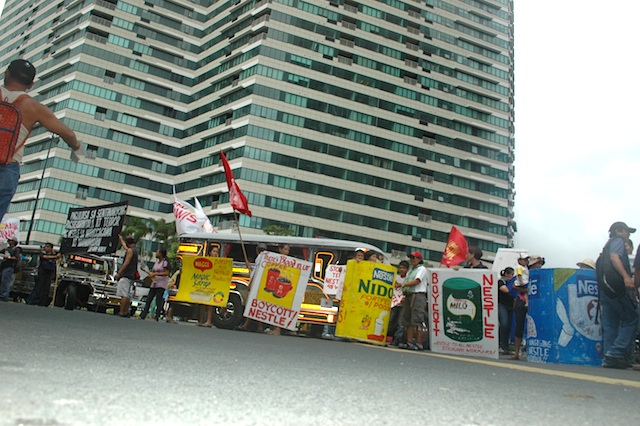 The issue that had been at stake and which resulted in this bloody strike was the disagreement over the inclusion of retirement benefits in the points to be discussed in the collective bargaining negotiations in early 2000. Nestlé reportedly refused to include it in the negotiations, even if it was not only the legal thing to do, as the subsequent three Supreme Court decisions had affirmed; it was also the moral thing to do, said the unionists.

The same retirement issue had previously been inked into their past collective bargaining agreement at the cost of an earlier strike that had resulted in their union president being murdered, and their union officers terminated, Noel Alemania, acting president of the Nestlé workers union, UFE-DFA-KMU, told bulatlat.com. Nestlé “has been accused, and for good reason, of masterminding the assassination of two presidents of the Nestlé workers’ union while the latter were engaged in a struggle with the company,” Roger Soluta, secretary-general of KMU, said.

The Nestlé management reportedly helped install another union to take the place of the union on strike and maintaining a picket outside the premises of their core factory in Cabuyao, Laguna. Members of UFE-DFA-KMU charged that the officers of this “management union” are going to the labor department offices aboard company vehicles, sometimes with security provided by the company, too.

Award and citation for “industrial peace”

Despite this bloody treatment of its unionists, Nestlé Philippines was cited and awarded early this May by the Employers Confederation of the Philippines (ECOP) in its biennial Kapatid Awards for “industrial peace and harmony” and “social accountability.” President Benigno “Noynoy” Aquino III himself witnessed the awarding and helped the ECOP leaders in handing out the awards and citations to Nestlé and 12 other multinational employers.

“The importance on excellence that Nestlé puts in their efforts to nurture the consumers, the environment and their stakeholders makes them capable of nourishing a better Philippine future for the next one hundred years,” said ECOP in awarding Nestlé for industrial peace, harmony and social accountability.

“But they (Nestlé) cannot cover up with their grandiose advertisements and made-up celebration the murders of Meliton Roxas and Diosdado Fortuna, the two union presidents in Nestlé Philippines, Cabuyao,” the Pamantik-KMU said in a statement.

It added that “the media blitz being done by Nestlé could no more hide its continued violation of the Supreme Court decisions and other laws in the Philippines so it could continue to deny justice to its workers who are now into their ninth year of strike.” 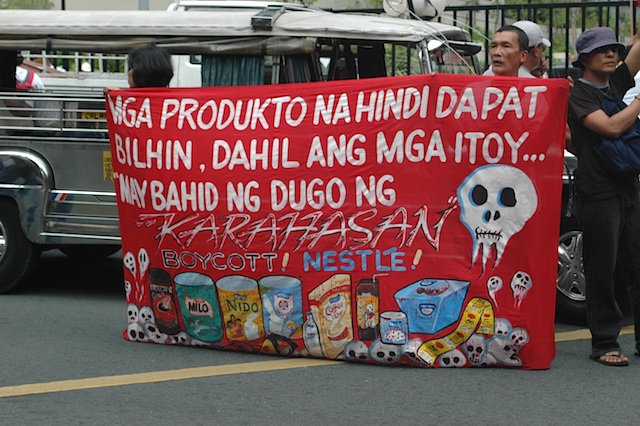 “Despite its well-funded campaign to hide its crimes from the public’s view, the Filipino workers and people who are in the know persist in remembering its crimes and making it pay for these,” said Roger Soluta, KMU secretary-general. “Nestlé’s media campaigns are proof of its cruelty to workers. It can pour huge amounts of money into boxing out news of its wrongdoings from the mainstream media and into repeatedly playing its feel-good TV ads but it has refused to allot even a meager amount for settling its dispute with its workers,” Soluta added.

“Hundred years of exploitation and terrorism vs workers and people”

On the occasion of the 100th year of Nestlé, unionists held a day-long protest that began early morning with a short program in front of the sprawling Nestlé factory in Cabuyao, Laguna. Next, the unionists belonging to the Pagkakaisa ng Manggagawa sa Timog Katagalugan-Kilusang Mayo Uno (Pamantik-KMU, or United Workers of Southern Tagalog-KMU), joined by their counterparts in Metro Manila, held a caravan to Roxas Boulevard in Manila.

The unionists’ program in Roxas Boulevard was marred by a scuffle with the security guards of nearby SM Mall of Asia, itself another company cited by ECOP. SM guards reportedly tried to stop the unionists from denouncing Nestlé in their program. Next, the unionists went to Rockwell in Makati, where Nestlé keeps its headquarters. They held a brief program there and afterward they drove to the labor department and later to the Mendiola Bridge (now Chino Roces Bridge) near Malacañang. 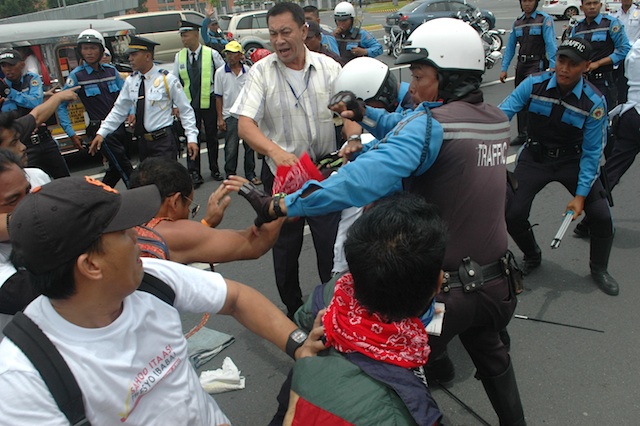 On Nestlé’s 100th anniversary, the labor center KMU scorned the company “for attacking workers’ rights.”The labor center described the corporation as “the face of multinational exploitation and repression of Filipino workers.”

“We call on the Filipino workers and people to boycott all Nestle products. There is indeed blood in your coffee, chocolate drink, ice cream and others,” said Soluta.

An overseas Filipino workers (OFWs) group in the Middle East said it will support a campaign staged by the local workers of Nestle in the Philippines by urging OFWs and their dependents to boycott Nestle products.

“The struggle of Filipino workers in Nestlé deserves support by the entire working class and Filipino people including overseas workers who both have been victim of exploitation and repression by multinational and transnational corporations like Nestlé,” said John Leonard Monterona, Migrante-Middle East regional coordinator.

Monterona said that as a concrete support to Nestlé workers’ struggle, chapters of Migrante in the Middle East will pass a resolution that calls for boycott of all Nestlé products. “Our officers, members and networks of OFWs, supporters and friends will urge their dependents in the Philippines to do the same,” Monterona added.

About 50-percent of individual OFW remittance is spent for food and other goods needed for their daily consumption, said Monterona. He added that instead of buying Nestlé products tainted with our workers’ blood, they will urge fellow OFWs and dependents in the Philippines to patronize products or goods made by other food corporations that recognize the legitimate rights and demands of Filipino workers.