You Are Here: Home → 2011 → July → 1 → Rights groups criticize Aquino gov’t for continuing violations, failure to act on calls for justice

“The Aquino administration has been contented in being a passive spectator, leaving the victims, relatives, human rights defenders and their lawyers on their own.” – National Union of Peoples’ Lawyers

MANILA – Raymond Manalo is fulfilling a promise he made to Karen Empeño and Sherlyn Cadapan, University of the Philippines students, who remain missing to this day. Despite threats to his life, he is relentlessly searching for the two UP students and pursuing justice for all victims of human rights violations.

Raymond and his brother Reynaldo were forcibly taken by soldiers on February 14, 2006 in San Ildelfonso, Bulacan. The brothers were transferred from one safehouse/military camp to another and met other victims of abductions, including Karen and Sherlyn.

“At Camp Tecson, I first saw Sherlyn chained to the barracks. Two days after, Karen and Tay Manuel were also brought to the camp,” Raymond said, referring to Manuel Merino, a farmer who was abducted along with the two UP students on June 26, 2006 in Hagonoy, Bulacan. “We lived like slaves, the two women were always ordered to massage the soldiers and paramilitary,” he said in a forum June 29.

In Limay, Bataan, Raymond said he saw how the soldiers raped the two women and burned Merino alive. He himself was subjected to extreme physical torture – his hands and feet were chained; he was administered the water cure or waterboarding, in the parlance of the US military; he suffered burns from a flaming tin can; he was repeatedly kicked, and hit with the butt of rifles. The scars on his face and on his body are a testimony to those hellish 18 months of his detention.

The Manalo brothers managed to escape. And despite the threats, Raymond managed to overcome his own fears to keep his word– that he would help in finding Karen and Sherlyn and that he would not tire in seeking justice for victims like him. “We promised to each other that if any one of us would survive, he or she would testify about what we went through,” Raymond said.

Raymond filed criminal and administrative charges against retired Gen. Jovito Palparan Jr. and other military officials he was able to identify. Raymond’s testimony, corroborated by other witnesses, helped the mothers of Karen and Sherlyn to file criminal charges against Palparan et.al. 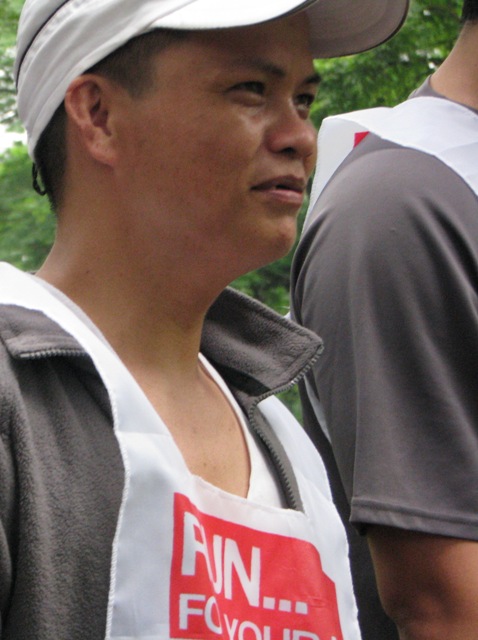 Raymond Manalo joins the Run Against Torture marking the fifth year of the disappearance of Karen Empeno and Sherlyn Cadapan .(Photo by Ronalyn V. Olea / bulatlat.com)

At one point during his captivity, Palparan talked to Raymond. “He introduced himself to me, asked me if I knew him and if I am afraid of him. I told him I only see him on television. He told me he would spare my life if I would cooperate with them,” Raymond said.

Perpetrators of these human rights violations remain untouched. For the nth time, Palparan and the Armed Forces of the Philippines (AFP) denied custody of Karen and Sherlyn following a recent order by the Supreme Court to release the two.

“By denying custody of Karen and Sherlyn, the AFP covers up their human rights abuses. The military under Aquino is only good at public relations but in essence, there has been no change,” Lorena Santos, deputy secretary general of Desaparecidos, said. Santos’s father Leo Velasco is one of the 17 consultants and staff of the National Democratic Front of the Philippines who have been forcibly disappeared during the Arroyo regime.

Despite positive pronouncements about upholding human rights, the Aquino administration has not lifted a finger to prosecute notorious military officials linked to or accused of human rights violations.

In a statement, the National Union of Peoples’ Lawyers (NUPL) said the Aquino administration has failed to bring to justice the perpetrators of the extrajudicial killings, enforced disappearances and other human rights violations under the Arroyo administration.

Edre Olalia, NUPL secretary general said the Aquino administration “has been contented in being a passive spectator, leaving the victims, relatives, human rights defenders and their lawyers on their own.”

The victims themselves and their families filed civil and criminal charges against Arroyo and her military officials. These include the filing of damage suits by members of the Morong 43 and the United Church of Christ of the Philippines (UCCP) against Arroyo, criminal charges filed by Mrs. Edith Burgos, mother of Jonas Burgos, and the charges filed by the mothers of Karen and Sherlyn.

‘’Despite the promise of change, state terror and violence continue to be used against those who fight or criticize the current policies and programs of the government…” Roneo Clamor, Karapatan secretary general, said.

In just one year of the Aquino presidency, Karapatan said there have been 48 victims of extrajudicial killings, five victims of enforced disappearances, 29 victims of torture.