You Are Here: Home → 2011 → July → 20 → Students stage national day of action for education in preparation for Aquino’s Sona

MANILA – Students from all over the country staged a nationally-coordinated walk out on July 19 in preparation for the big protests slated on July 25. President Benigno Aquino III will deliver his second State of the Nation Address (Sona) on the said date, and the youth and students sector is determined that he hears what the youth have to say about his first year in office.

Students burdened with paying for UP operations

In UP Diliman, student regent Krissy Conti said UP students remain appalled at the neglect of the Aquino administration for education. She said operations of the country’s premier university are now largely taken from student fees. 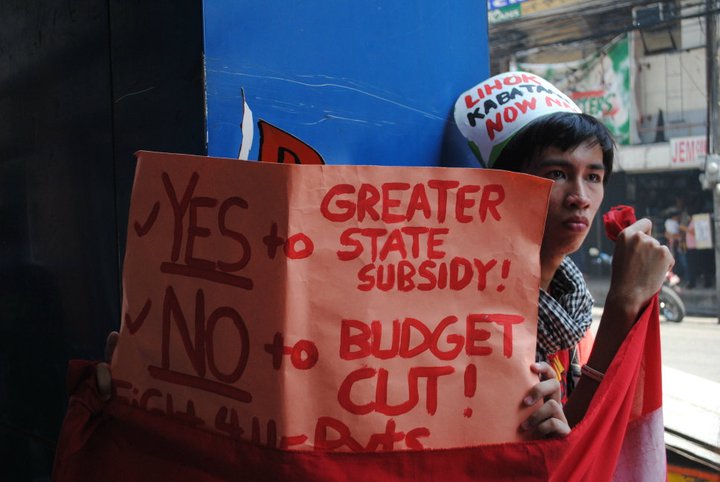 Students from various state colleges and universities in Cebu participate in the nationwide protests condemning what they say is the Aquino administration’s frustrating support for education.(Photos by Dyed Bautista / bulatlat.com) 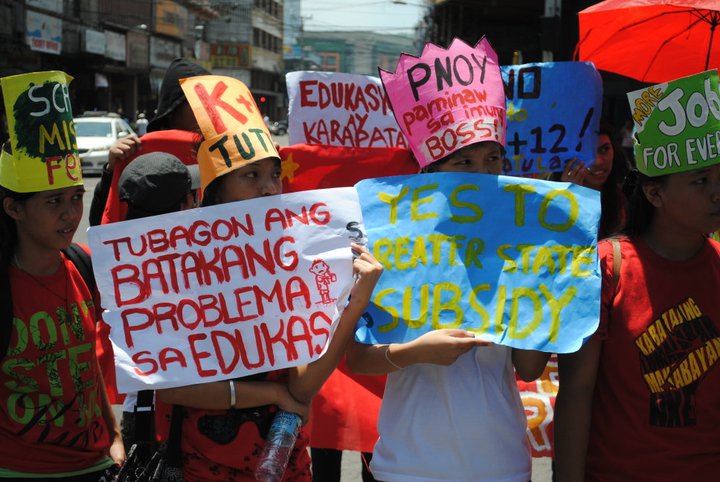 “This is a significant increase from the 47 percent share of internally generated income in the 2010 budget, and from the five-year average of 55 percent. Students are being forced to pay more for the university’s upkeep because national budget allocations are mainly for salaries of teachers and personnel. Students shoulder maintenance fees even for activities that are academically related,” said Conti.

Students staged various activities across the UP system. In UP Diliman, artists led the crowd in a flash mobilization, dancing to pop tunes at the Palma Hall lobby. In UP Visayas, some 1,000 students merged in the city center Iloilo after lunch.

In a statement, UP Diliman community leaders said, “We are alarmed that state support for education under President Aquino is diminishing in measures, and deteriorating in quality. We demand that government steadily commit and timely release funds to the education sector – to the Department of Education and to state colleges and universities, including the University of the Philippines.”

The statement was signed by student leaders led by the student regent and the chairperson of Katipunan ng mga Sangguniang Mag-aaral sa UP, the alliance of UP student councils, Anj Cando of UP Visayas. UP Diliman deans, Miguela Mena of the Asian Institute of Tourism, Rolando Tolentino of the College of Mass Communication and Erniel Barrios of the School of Statistics also signed the manifesto.

UP students also showed solidarity with the mothers of missing UP students Karen Empeño and Sherlyn Cadapan, who faced retired Major Gen. Jovito Palparan, accused of abducting and torturing the students in 2006. Palparan et al on July 19 submitted their counter affidavits at the Department of Justice (DOJ).

“We staged our walk out also in honor of Karen and Sherlyn, who were both passionate campaigners for adequate state subsidy to education and social services.”

The national walk-out was also supported by the Philippine Association of State Universities and College (PASUC), and Kabataan Party-list. The two groups focused on challenging President Aquino III to commit a sufficient budget for public tertiary education in his upcoming Sona.

Wearing white ribbons, the 112 SUC-members of PASUC all over the country called for justice for public tertiary education which has experienced huge budget cuts over the past 20 years.

According to reports from Kabataan Party-List, the education protests were also endorsed by UP President Alfredo Pascual. The students held decentralized actions from candle lighting to “planking,” a popular activity around the world consisting of lying face down often in unusual places or locations.

Kabataan Rep. Raymong Palatino said members of the education sector are united in laying down a demand for a sufficient budget for public tertiary education.

“We will definitely be out on the streets on Sona day as we appeal to President Aquino to prioritize social services such as education. The Philippines will not develop without a functional public tertiary education. SUCs are crucial in the process of national progress and development,” he said.

SUCs were given P24 billion budget in 2011. PASUC maintained that the amount is “grossly insufficient” for the qualitative operation of SUCs. It said that the meager budget is forcing many SUCs to resort to commercializing schemes which cause an increase in tuition and other fees.

“Accessible quality education is a key service that never be neglected in societies that claim to be democratic. An increasingly inaccessible tertiary education breeds ignorance and impedes social progress. We cannot turn a blind eye and allow this to continue. This makes the call for SUC budget increase worth fighting for,” Palatino said.

As of 4p.m., the National Union of Students of the Philippines (NUSP) in Iloilo announced that an estimated 2,500 students and teachers left their classes to join the protests.

NUSP president Einstein Recedes reported in his Twitter account that Ateneo de Naga University- and Camarines Sur students also held a successful forum on education as their contribution to the National Day of Action for education.

State of no achievement

In the meantime, Anakbayan national chairman Vencer Crisostomo said the acronym ” Sona” should read ” State of No Achievement” in Aquino’s case.

“He failed to do anything meaningful to address the education crisis. There are rising student drop-out levels because of budget cuts and tuition increases. The promise of change was clearly a farce. No real change has been instituted in terms of providing access to education and a decent future for the youth. What we have seen instead are budget cuts for education and social services while allocations favored military and foreign debt spending. Corruption continues to rage like disease through the government system,” he said.

Crisostomo said the protests ahead of the president’s Sona are meant to deliver the message that the youth and the rest of the Filipino people have had enough of Aquino’s “papogi, pa -showbiz” tactics (cutesy, show business-like) and attempts at humor to cover for his lack of achievement and the anti-people, pro-business and pro-landlord policies he imposed.
“The real state of the nation: poor, hungry, and deprived of their basic rights and social services,” he said.
Incompetent and a burden to the people

As expected, the League of Filipinos delivered the harshest words of condemnation against President Aquino. The group called him ” incompetent, a burden to the masses, a trusty imperialist puppet.”

“Aquino may be good with his words but the worsening economic crisis proves that reading speeches and dropping sound bites are all he’s good at. Filipinos have become poorer under his leadership. His first year in office was mediocre to say the least and unemployment, homelessness and poverty levels continued to rise,” said Aki Merced, LFS spokesperson.

“Take the education crisis for instance, he was unable to put a stop to it. There are 7.93 million youth who are unable to go to school because their parents are either unemployed or because what they earn are barely enough to keep the rest of the family fed and clothed and under a genuine roof. What was Aquino’s response? To add two more years to basic education. Every school opening we are bombarded with facts and figures proving how there are extreme classroom shortages in the public school system. How the quality of public education continues to deteriorate because of lack of funds. Aquino has not addressed these issues at all and instead he offers a completely unnecessary and unjustified solution that’s really no solution at all,” he she said.

“With a large chunk going to foreign debt servicing, it is of no question that the education and economic crisis will worsen under this government,” she said. “Under his Philippine Development Plan for 2011-2016, he will worsen the import dependent and export oriented character of the economy. Aquino has no plans of developing industries and agriculture, the main foundation of any economy. He’s determined to keep the country dependent on foreign direct investments, and send Filipinos abroad as slave labor. ”

The student leaders said that the youth and students sector will participate “by the thousands and thousands” in the July 25 protests. .