Mariano said the Philippine government could then have sufficient funds for a genuine agrarian reform, with appropriate support services such as irrigation and farm implements, and national industrialization.

These, Mariano said, are the solutions to very lackluster job creation and its resulting migration to cities and abroad. A point which the chairman of Kilusang Mayo Uno, Elmer “Bong” Labog, also underscored.

Because the roots of the armed struggle in the Philippines could be traced to landlessness and poverty, Mariano warned the Aquino government that “auctioning off of its natural resources, lands and seas, to foreigners as gleaned from their charter change proposals, will not bring about genuine peace.”

He reiterated also the demands of all peasant organizations for the military to pull out from their villages, and to “make accountable all the perpetrators of human rights violations.”

“Till now, no one among the alleged perpetrators of human rights violations have been jailed,” said Anakpawis Rep. Mariano. He also blamed the Aquino government for the bogged down peace talks, as it refuses to release the 350-plus political prisoners in fulfillment of the Philippine government’s earlier agreements with the National Democratic Front of the Philippines (NDFP). 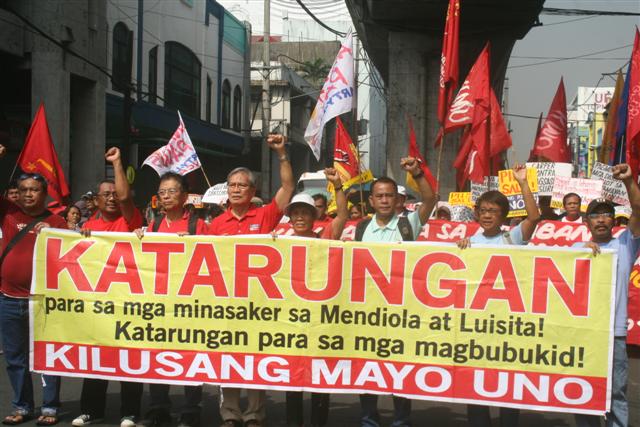 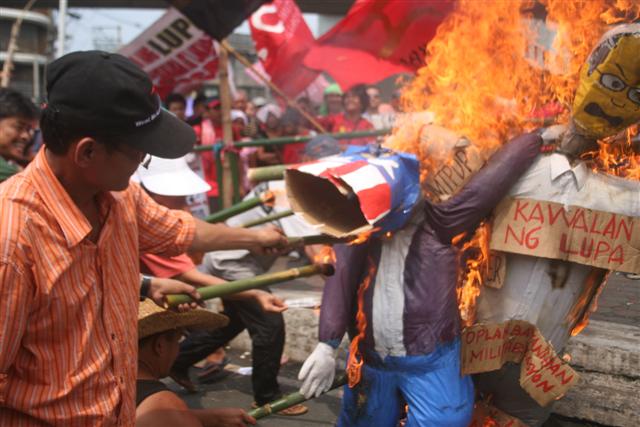 Top: Arrival at Mendiola of peasant groups and advocates, Oct 19. Bottom: Peasant leaders torch the scarecrows representing the “hacienderos and the US imperialist.” (Photos by Angelica de Lara / bulatlat.com)

“It is important to respect the first agreements (of peace negotiations),” said Makabayan President Satur Ocampo at the Mendiola rally. He detailed that by now, if the Aquino government had been complying with the agreements, which were signed by the GPH and the NDFP, they should have been already tackling the Comprehensive Agreement on Socio-Economic Reforms (CASER), which mainly includes genuine agricultural reforms.

Unfortunately for the demands of peasants for land and for a stab at real economic development, the Philippine government headed by Aquino is stalling now at even starting talks of CASER, because, according to Satur Ocampo in Filipino, “Aquino has boxed in the so-called peace process under its framework of counterinsurgency.”

Aquino has thus “removed from the agenda of peace talks the issue of agrarian revolution, ancestral domain and national democracy,” explained Ocampo. Instead, the Aquino government has placed all these under the Pamana programs of Oplan Bayanihan. 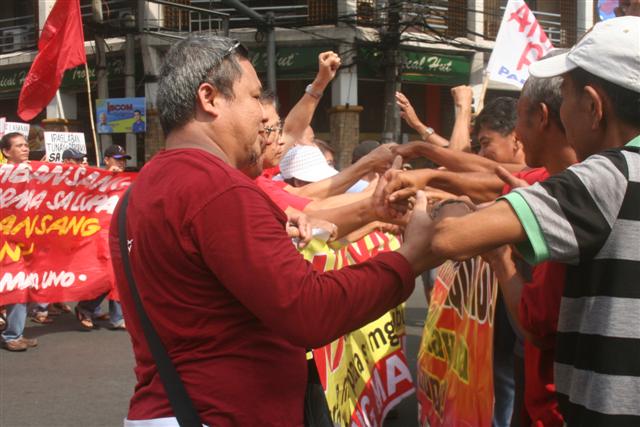 The Aquino government’s “double-talk” has it saying “it will give importance to peace process, while the military is saying ‘let’s do away with the NPA before addressing the roots of the armed conflict.’” Ocampo stressed to farmers that the lack of social justice is at the root of the NPA’s armed struggle – thus, addressing this and not attempting to decimate the NPA, should have been the priority.

Ocampo said the AFP’s framework of “winning the peace militarily means resorting to further injustices,” which, in turn, can only add fuel to the armed struggle. He dared the Aquino government to stand for an independent foreign policy and economy. “Do it and immediately, there will be a truce.”

(With report from Angelica de Lara)