MANILA – There is freedom of expression according to the Philippine Constitution, but according to the marchers who protested the visit of US Secretary of State Hillary Clinton in the country, the Aquino government is “giving more priority to Clinton’s stature rather than the Filipinos’ rights.” The protesters who came from various progressive organizations were twice barred by the police from marching nearer toward the US Embassy Tuesday, hours before Clinton’s scheduled arrival. The protesters were thus forced to hold their program, which included burning a US flag, along Kalaw Avenue.

Warning the Filipinos to “beware of the US government’s make-believe friendship,” the progressive groups said Hillary Clinton’s visit is “more for strengthening the lopsided US-Philippine relationship, enhancing the means with which the US can further take advantage of the Philippines, and attacking our sovereignty.” The protesters held their program inches away from columns of shield and baton-wielding members of the police.

After 60 years of Mutual Defense Treaty (MDT) and “broken promises” about helping to develop the Philippines, particularly its armed forces, Renato Reyes Jr. of Bayan said, Filipinos have “no more illusions” that it can ever be of real help. In fact, after decades of this “myth of cooperation and reciprocity,” he pointed to the Philippines being “shamefully the most backward in the region” as proof of MDTs’ utter uselessness for the country. 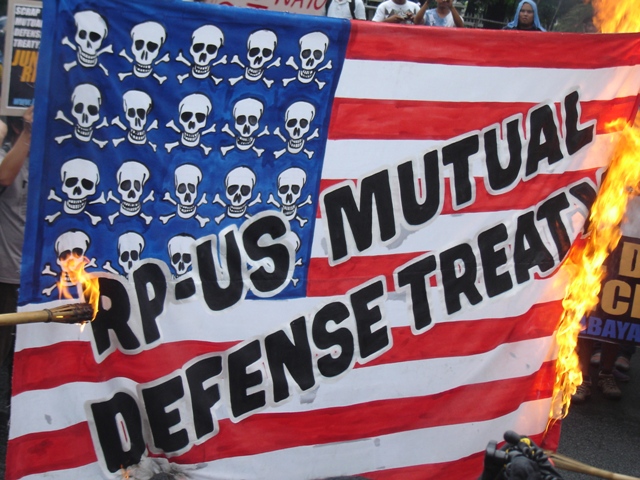 The MDT was forged when the US government used the Cold War as justification for dragging the Philippines into wars, Reyes said.

“The MDT which made the Visiting Forces Agreement (VFA) possible, and which Benigno Aquino III had promised to review while campaigning for the presidency because of its many problematic provisions, is still not reviewed up to now– over a year since he became president,” said Reyes.

In a statement, Bayan has previously said, “Mutuality and reciprocity are the biggest myths fostered by the MDT and the VFA. These instruments are in place primarily to secure support for US hegemonic interests in the region and not for anything else.” They also urged the Philippine government to “wake up from the pipe-dream that we are treated as equals and with respect by the US.”

Clinton will announce new support for the Philippines in her latest visit, based on an Agence France-Presse report. Officials accompanying Clinton on her trip to “key allies” in the Pacific were quoted as saying she would hold talks with President Benigno Aquino III and tour a warship.

The United States has provided the Philippines recently with a second-hand World War II-vintage destroyer, amid high tension between Manila and Beijing over the Spratlys. Officials accompanying Clinton also said she will discuss offering another one. 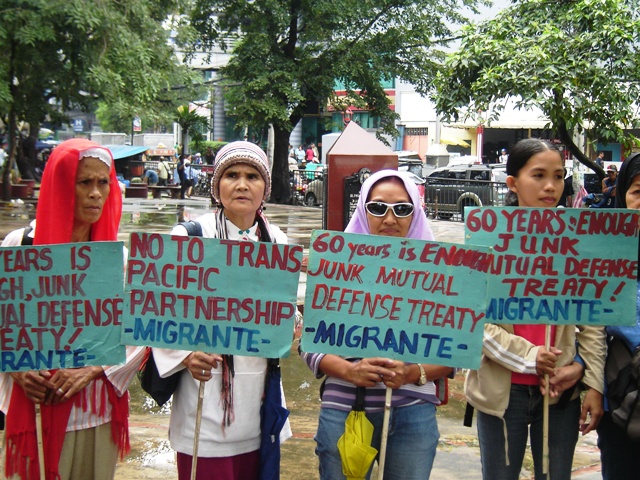 It is precisely because of such military aid that the Philippine government “refuses to abrogate these two agreements (MDT and VFA), even at great cost to our sovereignty,” said Reyes.

“If Mrs. Clinton came to our country only to fortify their intervention over Philippine military and economic affairs, then she should go home and take away with her all the non-mutual treaties between the US and the Philippines,” said the Anakpawis Partylist in a statement.

“There had been no mutual ties between the US and the Philippines. These treaties only benefited the US and its global hegemony,” Joel Maglunsod, Anakpawis Executive Vice President, said of the Mutual Defense Treaty (MDT). He added that “the only tie that binds the Philippines and the US is the one that hangs the Filipino people by the neck.”

Anakpawis warned against the “Partnership for Growth” initiative of US President Barack Obama, saying it would only “further open up the Philippine economy to US domination and control.”

“Clinton’s visit also proves the US hand on the planned charter change in the Philippines. She wants to ensure US domination and control over the Philippine economy by amending the constitution and allowing 100-percent foreign ownership of our lands, natural resources and businesses” Maglunsod of Anakpawis Partylist said.

“It has long been proven that opening up our economy for US domination would never bring any growth. We have been opening up our economy for almost a century and what has it caused us?” Maglunsod asked. He said the century-long US dominance over the Philippines “brought nothing but a backward economy, destroyed hopes for national industrialization, and a spectacularly high poverty rate.” 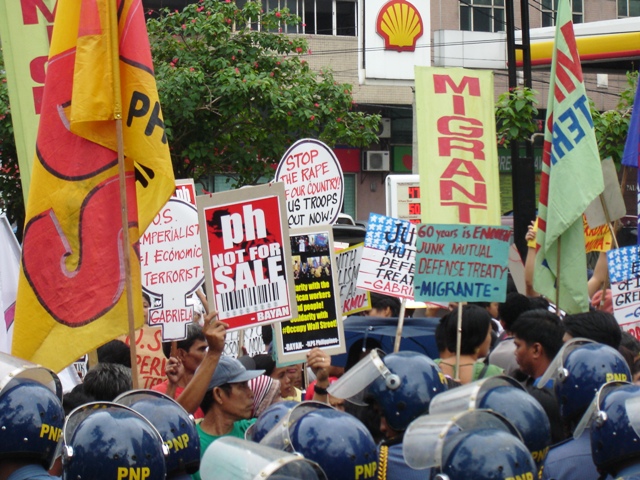 Pushing cha-cha seen as one of Clinton’s reasons for visiting Manila.(Photo by Marya Salamat / bulatlat.com)

“After Aquino’s US visit, the moves to change the Philippine charter was revived, and the charter change proposals mostly aim to further open up the Philippine patrimony and sovereignty to imperialist plunder,” said Roger Soluta, secretary-general of Kilusang Mayo Uno (KMU), during Tuesday’s protest against Hillary Clinton’s visit in Manila.

Soluta warned that the US is pushing the Philippines and the entire region to come into an economic agreement that is “worse than the WTO in obliging you to obey the imperialist dictates.” For the KMU, it is clear Clinton’s visit is “meant to ensure that these things are followed through by the Aquino government.”

The changes which the proponents of cha-cha want to put into the Philippine constitution are exactly the kind of “imperialist impositions and exploitation that are widely being protested all over the world,” said Soluta.

The women’s alliance Gabriela ascribed also to “US self-interest” the visit in the Philippines of US State Secretary Hillary Clinton. Decrying how the Philippine government has been welcoming and protecting US troops in these shores, and helping them get their rest and recreation at the same time, Lana Linaban, secretary-general of Gabriela, asked, “how many more women and children will fall victims of sex crimes and human rights violations because of the MDT?”

Do the US troops have accountability to the 50-plus cases of extra-judicial killings and 58 cases of enforced disappearances under the year-old regime of President Benigno Aquino III? Jigs Clamor, secretary-general of human rights group Karapatan, said yes, US troops are “hugely accountable.” He blamed the US government of “teaching the Philippine armed forces how to conduct surveillance, how to do those dreaded human rights violations in the course of advancing counter-insurgency.”

Clamor likened the Aquino governments’ Oplan Bayanihan to the former Arroyo administration’s Oplan Bantay-Laya, as the same cases of human rights violations continue to hound Filipinos to this day.

The Anakpawis partylist urged Congress to scrap the “un-mutual” treaties (MDT, VFA) and to “uphold our country’s national territory and sovereignty as stated in the 1987 Constitution.” Many provisions of the Philippine Constitution have no enabling laws to this day, a charter expert told the lawmakers in last month’s hearing on proposed charter change. Of these unimplemented provisions, many are the nationalist protections put in by the charter framers in 1987. These unimplemented provisions are some of the target for eradication by the proponents of charter change, noted Sonny Africa of Ibon in the same congressional hearing. 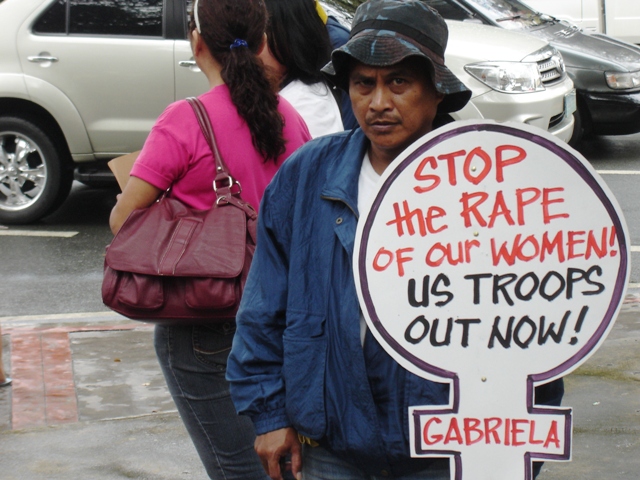 A Gabriela member seeks to protect Filipinas from rapists among US troops.(Photo by Marya Salamat / bulatlat.com)

“Our laws and policies should at all times uphold our national sovereignty and the welfare of the Filipino people. We urge the Filipino-loving lawmakers to junk all non-mutual treaties and agreements entered with the US especially the MDT and the VFA” said Maglunsod.

Anakpawis also called the attention of “anti-Filipino Congressmen who are attempting to amend the constitution in favor of foreign interests.” He urged the government not to allow the US or any foreign entity “to rape our lands and natural resources just as how they are letting a US soldier rape a Filipina and get away with it.”