“The final, long awaited EO makes it clear that Malacañang has addressed only the concerns of foreign business but brushed away legitimate concerns of mining affected communities and environmental groups.” – Kalikasan Party-list

MANILA – As Malacañang released this week the copy of the executive order on mining it signed last Saturday, the church through the CBCP (Catholic Bishops Conference of the Philippines), progressive groups under the umbrella of Kalikasan Peoples Network for the Environment and other environmentalist groups immediately voiced their opposition to and reservation with the EO.

“That President Benigno “Noynoy’ Aquino III chose to issue an EO in the first place, instead of supporting the legislative efforts for the enactment of an Alternative Minerals Management Bill or the People’s Mining Bill, pending in the House of Representatives, betrays this government’s intent of upholding and strengthening the destructive and anti-people Philippine Mining Act of 1995,” said Gabriela Women’s Party Representative Luz Ilagan in a statement. 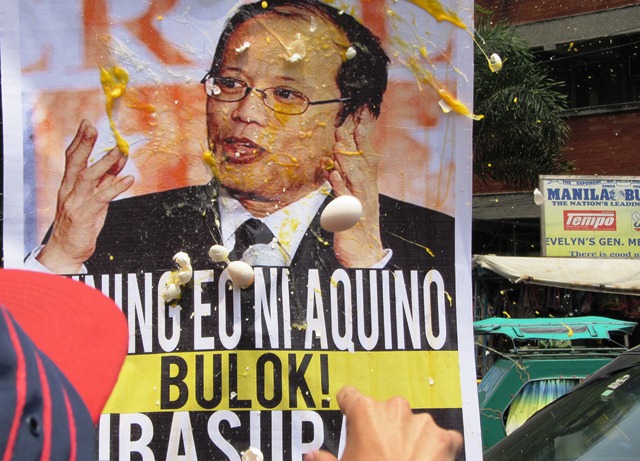 Environmentalists hurl eggs at Aquino’s picture during a rally at Mendiola. (Photo by Marya Salamat / bulatlat.com)

Perhaps in an effort to disarm what the government calls as “anti-mining advocacy,” Aquino’s newly signed executive order on mining uses “elegant language” and terms that sound like it is attending to the wounds inflicted by the 17-year old Mining Act of 1995. But various sectors and environmentalist groups are not fooled.

Allies of the Kalikasan Partylist trooped to Mendiola Bridge near Malacañang last Tuesday to hurl rotten eggs at a smiling picture of President Aquino. He had not only signed what the protesters describe as a “masterfully deceptive” executive order, he has also been openly promoting large-scale mining despite the growing peoples’ protests.

Based on statements of Kalikasan Partylist and other progressive groups, the following are some of the ways in which Aquino’s Mining EO has cunningly dressed up its drive for increased liberalization in mining:

1.‘No more mining applications’ – It appears like a mining moratorium but it actually does the opposite. Even as the EO temporarily closes the door on new mining entrants, it welcomes, at the same time, hundreds that have approved mining applications before the signing of the Executive Order last July 6.

Data from the Mines and Geosciences Bureau show that as of June 30, 2012, the government has already approved around 771 kinds of large-scale permits covering 1,009,161.21 hectares or almost 1/30 of the country’s total land area (see table). Over half of these cover ancestral territories of indigenous peoples’ group, practically threatening their very survival. 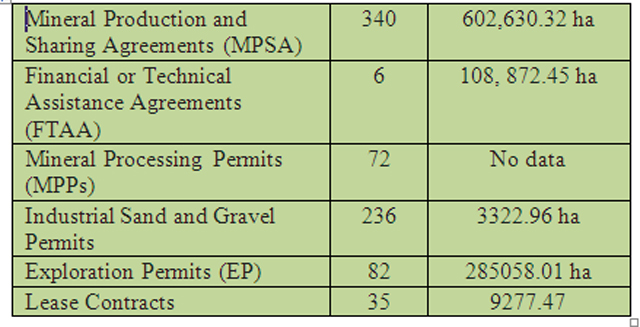 Aquino himself has approved more than 270,000 hectares of mineral lands for mining operations in the past two years, KAMP said.

The supposed mining ban is to end when a new law tweaking mining revenue is out, said Kalipunan ng mga Katutubong Mamamayan ng Pilipinas (KAMP). But given that “Congress and the Supreme Court are under President Aquino’s control, his administration can easily railroad the enactment of the new revenue scheme on mining and lift the moratorium,” said Kakay Tolentino of Katribu Partylist.

Further belying the purported ban or controls on mining are various provisions in the EO to process mining permits more rapidly, such as the one-stop shop, Kalikasan Partylist added.

2.‘Closing some areas to mining’ – This should have been music to the ears of environmentalists, but aside from the fact that the EO is not closing areas in dire need of protection against mining, the areas it did identify for closing have already been classified as in need of protection under different laws, which, said the Kalikasan Partylist, have loopholes.

The NIPAS law, for example, requires a lengthy and expensive process before an area can be officially declared as a protected area, said Frances Quimpo, secretary general of Kalikasan Partylist. As of 2012, she said, there are still only 240 protected areas.

“Unless a biodiversity and mineral-rich area is officially declared a protected area, there is still a chance that mining companies will be able to control them,” said Quimpo. Thus, it appears that the EO’s closing of some areas to mining is just an empty boast.

3.‘Only explorations allowed’ – Allowing mining companies to do exploration is not that far from allowing them to do actual extraction, based on Philippine experience. Aquino’s EO still allows mining companies to get exploration permits, which can be upgraded or used as basis later for the application of Mineral Production and Sharing Agreements or outright mining permit, said the Kalikasan Partylist.

In practice, it has also been the bitter experience of indigenous peoples’ groups that exploration permits are used as cover-up for extractive activities, Kakay Tolentino of Katribu Partylist told Bulatlat.com. Exploration permits are also relatively easier to get, since it does not require an Environmental Compliance Certificate. 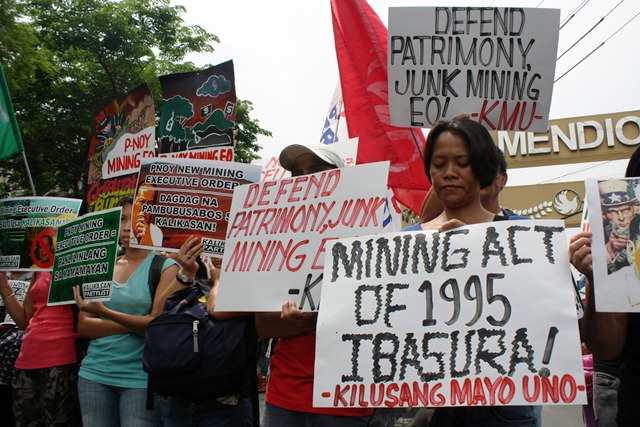 4.‘Existing mining contracts up for review’ – It sounds like the often complained of mining companies would finally be called to task, but such is the language of the EO that it “practically assures a favorable outcome for mining permit holders because it must be ‘mutually acceptable,’ to the government and the mining sector,” said Kalikasan Partylist. The group noted that the EO is also silent on whether the affected communities would have a say on the review or, in any case, renegotiation of mining contracts.

The review may also just turn out into another “kotong scheme” for government officials, or ways in which corrupt government leaders can get their hands on “a bigger cut by allowing big foreign mining firms to destroy the environment, exploit the nation’s natural resources, and endanger mine workers’ health and safety,” said the labor center Kilusang Mayo Uno (KMU) in a statement.

5.‘LGUs hosting mining operations to conform to regulations, decisions and policies … promulgated and taken by the National Government – While it appears as just an effort to unify government policies, in “elegant language,” the EO effectively overrides and subverts decisions by local governments and communities who have not allowed large-scale mining to start in their communities, said the Kalikasan Partylist. 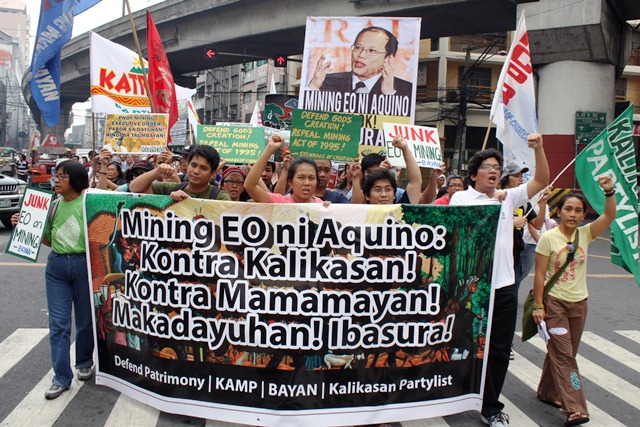 “Rather than support and develop the domestic small-scale mining (SSM) industry, which provides the bulk of jobs for poor Filipinos in the mining industry, the EO seems to be more interested in letting foreign large-scale players take over the areas for expansion,” said Quimpo of Kalikasan Partylist. She noted that Aquino “seems to be tightening the reins on SSMs to give way for more foreign and large-scale mining.”

7.‘There would be a National Industrialization Plan’ – This is the crux of the peoples’ demand in reorienting the mining industry – that it should serve the industrialization needs of this country, and not as it is treated today or in the past, as cheap raw materials irreversibly being extracted and shipped off for the development needs of advanced capitalist countries.

Aquino’s mining EO gives “lip service” to building ‘value-adding activities’ and developing ‘downstream industries,’ without an accompanying outline of how it plans to reverse the export-oriented and import-dependent nature of the current Philippine mining industry, said the Kalikasan Partylist. The group added that Aquino’s mining EO “seems to adopt the civil society’s proposal to come up with a National Industrialization Plan (NIP).” But it does not look like the Aquino government will actually follow through, as it proposes to build a national program and road map in the next six months based on this NIP and the Philippine Development Plan (PDP) already in existence since mid-2011.

Of the two, the NIP and the PDP, it is the latter that has an existing document and which the Aquino government has been most consistently following. The PDP outlines the exact opposite of any self-respecting NIP. As Kalikasan Partylist noted, the PDP is “premised on developing the mining industry through more incentives for big and transnational businesses, big infrastructure projects such as large-scale mining, and public-private partnerships across various economic sectors – incentives that contradict any semblance of national industrialization.

8. ‘There will be consultations’ – But with whom? Aquino’s EO will set up a new Mining Industry Coordinating Council (MICC), a national structure composed of the Climate Change Adaptation and Mitigation government clusters, the Justice Secretary, DENR, NCIP, and ULAP to oversee implementation and conduct consultations. Kalikasan Partylist noted that it clearly lacks representatives from civil society, affected communities and the academe, among others.

But aside from absence of peoples’ voice in the council, the progressive groups are alarmed over bigger threats posed by the MICC. According to ACT Teachers’ Partylist Rep. Antonio Tinio, the mining EO 79 demeans the authority of local governments over mining activities within their respective jurisdictions while it cedes vast discretion to the Mining Industry Coordinating Council (MICC).

“In the past, LGUs served as some form of restraint against excesses of these firms. Some heed the alarm raised by communities on the threats caused to environment and the locals by imposing moratoriums on mining activities in their respective areas. EO 79 removes this layer of protection,” ACT Rep Tinio said.

Among the MICC’s vast discretion is convening a Task Force Illegal Mining, co-chaired by the Secretaries of Finance and Environment, “to properly regulate small-scale mining participants.” Tinio predicted the MICC will target the portion of the industry that Aquino’s spokespersons have previously tagged as a “problem.”

Tinio also found disturbing MICC’s power to seek the aid of military and police in enforcing its decisions on how it interprets mining laws. It effectively legalizes armed assaults on communities opposed to mining operations. The armed sanction could only increase the reported human rights violations that have come together with mining operations.

Tinio cited the recent maiming and harassment of the locals of Sitio Balabag, Zamboanga del Sur where TVI Resource Development (TVIRD), a Canadian mining firm, is preparing for its open-pit gold mining operations. He shared that his office received leaked emails sent from May 1 to 20 between security officials of TVIRD. The confidential emails reveal that they have been using Special CAFGU Active Auxiliaries (SCAAs) as snipers and “security guards,” planting improvised ground bombs and “protecting our area” despite any court or police order that may be issued. TVI has also deployed against leaders, small-scale miners, and residents listed as “red” and “blue” targets several Special Surveillance Units equipped with “weapons for killing enemy combatants.”

Tinio warned that the “impunity of mining companies will only be sustained with the implementation of EO 79.”

Pres. Aquino’s EO on mining had promised a lot but fell short of its expectations from civil society and grassroots communities, said Quimpo of Kalikasan Partylist. If anything, she said, “The final, long awaited EO makes it clear that Malacañang has addressed only the concerns of foreign business but brushed away legitimate concerns of mining affected communities and environmental groups.”