Based on the latest statistics from independent human rights group Karapatan, 99 have been victims of extrajudicial killings, ten victims of enforced disappearances, more than 60 victims of torture.

Almost 30,000 civilians have been victims of forcible evacuation from heavily militarized communities. Thousands more were victims of violent demolition of their homes.

Karapatan said Aquino “has already done his own version of ‘unsheathing the sword of war’ and has no more pretensions about it.” Aquino’s mother, the late president Corazon Cojuangco-Aquino unleashed the ‘sword of war’ against the communist rebellion in March 1987. Such declaration translated to 816 victims of enforced disappearances, 1,064 victims of summary executions, more than 1.2 million victims of dislocations due to military operations, 135 cases of massacres, and 20,523 victims of illegal arrest and detention.

During the nine-year reign of Arroyo, Karapatan recorded 1,205 victims of extrajudicial killings and 206 victims of enforced disappearances. At the height of the political killings in 2007, then United Nations Special Rapporteur on extrajudicial, summary or arbitrary executions Philip Alston visited the Philippines and conducted an independent investigation. In his report, Alston raised several recommendations for the Philippine government. In his follow-up report dated April 2009 submitted to the United Nations Human Rights Council, Alston noted little progress on these recommendations.

Amid the new round of attacks against human rights defenders, two UN experts issued a statement calling on the Aquino administration to implement Alston’s recommendations, among others. 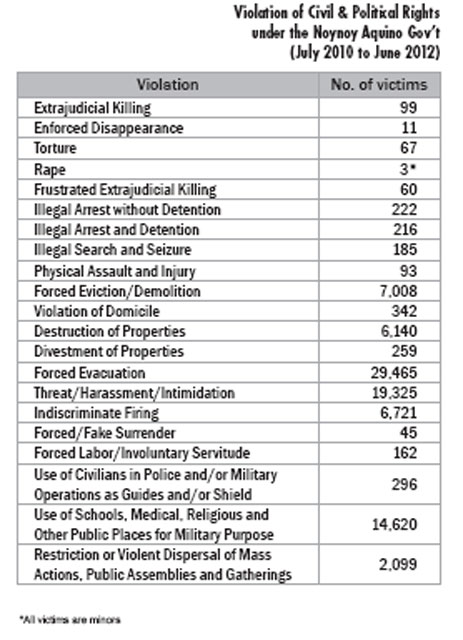 Foremost in Alston’s recommendations is the elimination of extrajudicial executions from counterinsurgency operations.

A look at the statistics from Karapatan reveals that most of the victims of extrajudicial killings are members of progressive people’s organizations, which have been tagged by the military as fronts of the Communist Party of the Philippines (CPP).

Alston, in his report, called on the government to direct all military officers to cease making public statements linking political or other civil society groups to those engaged in armed insurgencies.

At the time of his investigation, Alston revealed that 94 percent of victims of extrajudicial killings with known affiliations belonged to groups maligned by the Armed Forces of the Philippines as front organizations of the CPP.

Under Aquino’s Oplan Bayanihan, the vilification campaign continues. During one of the Congressional hearings of the House Committee on Human Rights, activists from the Cordillera and Cagayan Valley testified how they were branded as members of the New People’s Army (NPA), armed wing of the CPP.

According to Karapatan, of the 99 victims of extrajudicial killings, nearly half came from people’s organizations tagged as communist fronts.

In fact, Willem Geertman, the Dutch missionary slain recently, was branded by the military as a leader of the CPP-NPA.

Alston pointed out that transparency should be introduced to the “orders of battle”, “watch lists,” and similar list of individuals and organizations maintained by the AFP, Philippine National Police, and other elements of the national security system. He said that while their contents might justifiably be considered secret, which lists exist, their purposes, the criteria for inclusion, and the number of names on each should be made public.

During his visit, Alston got hold of copies of such orders of battle.

This recommendation has not been implemented until now.

Moreover, the regions listed as the priority areas of the AFP’s counterinsurgency operations registered the highest number of cases of human rights violations. 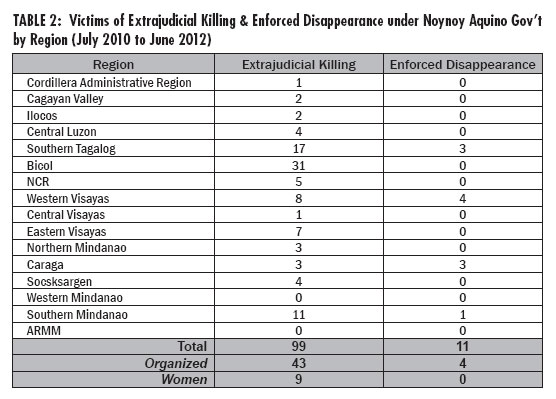 The killing of Italian priest Fr. Fausto Tentorio, for instance, happened a few days after a military official declared Southern Mindanao as the new epicenter of the NPA. Tentorio served the Manobo communities in Arakan Valley, North Cotabato within the said region.

The Aquino administration has not filed any criminal case against any of the top military officials implicated in serious human rights violations. The victims and their relatives themselves took the cudgels in filing cases against these state agents. Mrs. Edita Burgos, Mrs.. Erlinda Cadapan and Mrs. Concepcion Empeno, members of the so-called Morong 43 and the United Church of Christ of the Philippines filed several complaints, civil and criminal, against alleged perpetrators of torture and illegal detention and kidnapping.

Up to now, authorities have failed to arrest former general Jovito Palparan Jr., directly impleaded in the illegal detention and kidnapping of two University of the Philippines (UP) students and alleged mastermind in other cases of enforced disappearances and extrajudicial killings under Arroyo.

On the other hand, military officials with tainted record on human rights have been promoted ,such as the ones who arrested the 43 health workers in Morong, Rizal in February 2009.

In the same report, Alston said that convictions in a significant number of extrajudicial executions must be achieved.

In his first State of the Nation Address in 2010, Aquino said that three of the six cases of extralegal killings at that time were “on their way to being resolved.” He said that murderers would be held accountable.

One of the cases he mentioned was the killing of Bayan Muna officer and Aklan municipal councilor Fernando (not Francisco as stated in Aquino’s Sona) Baldomero. Baldomero’s son Ernan said the case was put on archive and the arrest warrant for the suspect, Dindo Lovon Ancero, has not been served.

A year after the release of Alston report, a study made by lawyer Al Parreño revealed that there were only four convictions in more than 300 cases of extrajudicial killings subjected to legal audit during 2001 to 2010.

Based on the monitoring of Karapatan, of the more than 1,000 cases of extrajudicial killings under Arroyo, only one resulted in conviction. The group said none has so far been prosecuted for the killings that occurred under Aquino.

Reacting to a statement by Human Rights Watch regarding the killings of environmental activists, Presidential spokesman Edwin Lacierda blamed the judiciary for the government’s failure to prosecute rights violators, according to a report from The Philippine Daily Inquirer.

“Malacañang spokesperson Edwin Lacierda’s statement shows the Aquino administration’s propensity to squirm out from each and every responsibility for extrajudicial killings and rights violations by blaming a branch of government under its auspices. It is the simply the lamest of excuses, as it disregards the efforts of victims and their families to file cases against rights violators, no thanks to Aquino. It simply manifests this administration’s low regard for the pursuit of justice for the victims and, in putting an end to killings and impunity. With this frame of mind, it is no wonder why Maj. Gen. Jovito Palparan Jr. remains free from arrest up to this time,” Cristina Palabay, Karapatan spokeswoman, said in a statement.

“While it is true that conviction of cases lies with the courts, it is also true that only a small number of human-rights abuse cases are filed in court. Most of these cases do not make it to trial to begin with. There are various reasons for this failure: investigations are stalled, witnesses are either afraid to come out or a themselves the target of violence, law enforcers are either too inept or too compromised to pursue thorough investigations, and, most important, suspects – such as retired Maj. Gen. Jovito Palparan — are not arrested despite the issuance of warrants of arrest. The military has, in several cases, sought to obstruct investigations. We remind Lacierda that all these fall within the responsibility of the executive branch,” Conde said.

While the Department of Justice (DOJ) under Secretary Leila de Lima formed a special task force tasked to investigate cold cases of extrajudicial killings, not one case has so far resulted in conviction of perpetrators.

Another strong recommendation put forward by Alston was the abolition of Inter-Agency Legal Action Group (IALAG), then a task force formed by Arroyo to build up cases against activists.

Even as Aquino never put up a similar mechanism, Karapatan raised alarm over the increasing number of political prisoners arrested under Aquino (See related story: Political arrests under Aquino rising at alarming rate). More than a hundred have been arrested and slapped with trumped up criminal charges.

Amid the violations, the Aquino administration, in its national report submitted to the Universal Periodic Review (UPR) of the United Nations Human Rights Council, said that there has been a decrease in the number of victims of extrajudicial killings and enforced disappearances.

In 2007, when Alston visited the country, he noted of the military’s repeated denial to accusations, likening it to “alcoholism.” “As in alcoholism, the first step to recovering is to acknowledge that there’s a problem. Without that, forget it. There’s nothing that could be done,” Alston said.

Five years later, under the new administration, the Armed Forces of the Philippines (AFP) recently issued a statement, saying there has been zero human rights abuses in the first four months of the year.