When President Aquino sought US support for joining the Trans Pacific Partnership during his US visit, the US Ambassador to the Philippines Harry K. Thomas Jr. declared…“[we] have to change laws, issue executive orders and frankly, introduce amendments to the Constitution.”

MANILA – While the nation grapples with heavy rains and the widespread floods it invariably bring, after the country has been severely deforested, Filipinos are being treated to what the progressive and patriotic groups scorn as a badly choreographed prelude to chacha or charter change.

The chacha proposals on the table revolve around “only the economic provisions,” the proponents promised. They would “only” remove restrictions to the inflow of foreign investments into the country, and disengage from the political rider of term extension that led to the wholesale rejection of first charter change initiatives.

“Aquino wants to build the path of least resistance for their ‘chacha’ maneuvers by projecting itself as disinterested while building consensus among the reactionaries to swiftly carry-out ‘chacha’,” the Communist Party of the Philippines said in an emailed statement.

Indeed, for weeks until last Monday, President Benigno “Noynoy” Aquino III reportedly played cool to charter change suggestions by both leaders of the Senate and the House of Representatives. Mainstream media reports portrayed Aquino as someone who had to be convinced in a meeting in Malacañang last Monday with Senate President Juan Ponce Enrile and Speaker Feliciano Belmonte before he “gratified” the two by showing openness to charter amendments, and telling his economic managers to study the proposals for amending the economic provisions of the 1987 constitution. 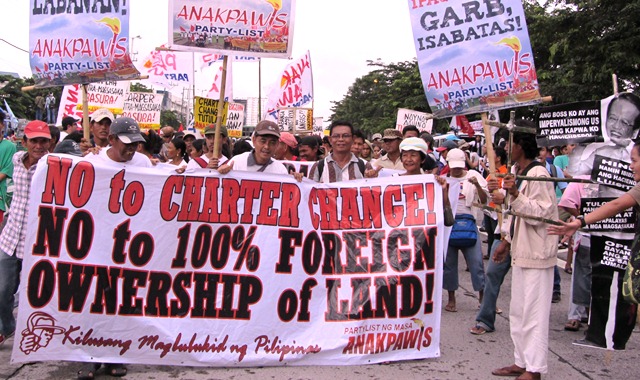 But based on his economic policies, Aquino is just as interested in pushing for charter amendments as the other past presidents who had tried, but failed, because they had also pushed for term extension in the amendment proposals. In a bid to make charter change acceptable, the Aquino administration is now seen as trying to shed off the oft-rejected political rider in past initiatives.

Still, critics from progressive and patriotic groups are not swayed. From their statements, they are one in pointing out that aside from the fact that the track record of both chambers of Congress and President Aquino shows that they cannot be trusted to do what they promised they would – this is the Congress that “passed obnoxious laws such as the Oil Deregulation law and the EPIRA” – the economic changes they now want to push through charter amendments are in itself “a recipe for disaster” for most Filipinos.

A choreography for further Filipino ruin

“We knew from the beginning of this drama that President Aquino will sooner or later come out as supportive of Cha-cha,” said Elmer “Bong” Labog, chairman of labor center Kilusang Mayo Uno (KMU). He reasoned that a president whose main program is promoting Public-Private Partnerships will surely support 100-percent foreign ownership of land and public utilities in the country.

As if Aquino has to be convinced of that, critics scoffed.

“This is the kind of drama that’s played out not to entertain the public but to test public opinion and ultimately do something harmful to the public. One hundred per cent foreign ownership of lands and public utilities will further make us squatters in our own country,” Labog warned.

The proposal to give aliens 100-percent ownership of land, public utilities, and natural resources is “a recipe for disaster given the festering problem of landlessness in the Philippines,” Bayan Muna Rep. Teddy Casiño said in an earlier statement. He warned that it “is sure to favor foreign mining firms to the detriment of mining communities and local players.”

In fact, viewed from Aquino’s string of policies and pronouncements, “The plan to amend our constitution is just the latest scheme of the US-Aquino regime in freely exploiting the Filipino people,” as the League of Filipino Students said in a statement.

“If we were to step back and look at Aquino’s implemented policies, from K to 12 program, EO 79, and the proposed chacha, we could see that all these only serve foreign demands and allow foreign companies to freely intrude into our economy,” said youth leader Gemma Canalis.

The charter change proponents are “practically giving up the country’s future to foreign investors,” Kalikasan Partylist secretary general Frances Quimpo said in a statement. She added that if the Aquino government pushes through with their rush to charter amendments, it “abandons our national patrimony and resources for future development and leaves these to the hands of profit-seekers, allowing our remaining natural wealth to be plundered at their will.” When that happens, Quimpo warned that it would have negative impacts on the Philippine environment.

Although the proponents are selling the public on their focus on economic matters, this time, their proposals to delete the nationalist provisions in the present charter still raises serious security issues. “Will China be allowed to maintain beach heads in Palawan and Batangas if it buys coastal lands in these provinces? Will China be allowed to buy Meralco and other public utilities and hold us hostage if the Spratlys and Panatag Shoal issue is not resolved?” Colmenares asked.

But more than the China threat which the Aquino government has been brandishing for months to justify welcoming the “rotational” basing of more US troops, chacha apparently counts among the Aquino government’s top priorities because it is one of the requisites set by US for it to join the Trans-Pacific Partnership (TPP) agreement being cobbled up by the US.

When President Aquino sought US support for joining the TPP during his US visit, the US Ambassador to the Philippines Harry K. Thomas Jr. declared at a forum on Philippine-US relations organized by the Washington-based Asia Society in August last year that “[we] have to change laws, issue executive orders and frankly, introduce amendments to the Constitution.”

“Malacañang may pretend that charter amendments is not Aquino’s own initiative, but his two years in office show that like Enrile and Belmonte, he is no less of a US lapdog than these politicians,” said the LFS. The US-dominated TPP aims to build a “free market zone” where member-countries abolish all tariffs and similar policies to achieve full investment and trade liberalization.

But the pro-liberalization proponents of chacha is “oblivious of the current global recession,” which happened despite decades of trade liberalization, said Raven Desposado, spokesman of the Student Christian Movement of the Philippines (SCMP).