You Are Here: Home → 2012 → September → 26 → Through their lenses: Documenting the people’s struggle since martial law

Two unlikely photojournalists and activists have observed and documented how, over decades since martial law, ‘the issues remain the same, only the details have changed and worsened.’

MANILA – Lito Ocampo, 59, had not thought he would become a photojournalist.

Some 40 years before, he considered himself as “just the younger brother of Satur,” a journalist turned activist during martial law. But in a bitter twist of fate, Lito Ocampo soon found himself smuggling photos out of government detention facility, where many political prisoners were imprisoned.

“It was only when I myself was detained that I learned what the country was going through. Before that, Satur was the only one I knew who was an activist,” Ocampo said.

When the younger Ocampo was arrested in 1974, he was not an activist by his estimation. He said he was just a “silent sympathizer” to the people’s struggle.

“It was Satur who was on the limelight. I was behind the scene. My brother trusted me and so during those times, I would do something for him from time to time,” he said.

Lito Ocampo was tortured and detained for more than five years. “It was a mass arrest,” he said. He was charged with conspiracy and proposal to commit rebellion. 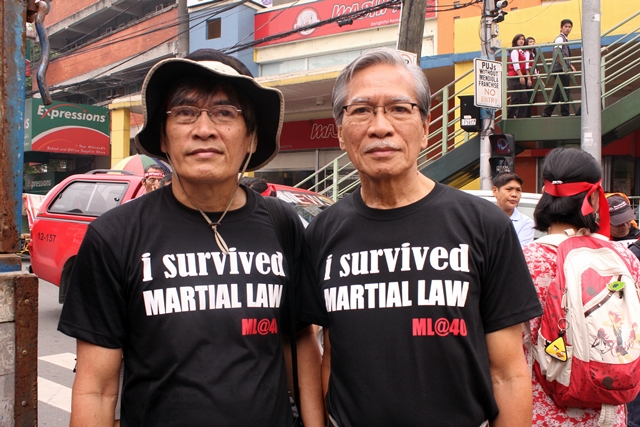 While he was in jail, the military would ask his parents to surrender Satur in exchange for Lito’s freedom. “They would tell my parents: ‘Give us Satur; Lito is nothing’,” he quoted the soldiers as saying.

In 1983, Lito Ocampo became active in a human rights group. It helped him discover his passion for documenting the people’s struggle.

“It was an accident. Someone managed to smuggle a camera in Bicutan. Whenever we would come and visit the political prisoners, I only needed to bring films. Then, I would distribute copies of pictures to the likes of Malaya,” he said, “My pictures were ‘exclusive’ and it left many detention guards wondering where the papers are getting the photos.” Malaya, then run by Jose Burgos Jr., was critical of the Marcos dictatorship. 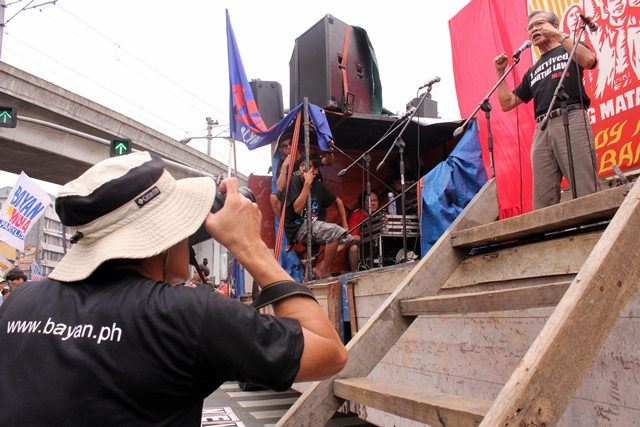 Lito Ocampo says he does not mind being more known as Satur’s brother than a photojournalist (Photo by Janess Ann J. Ellao / bulatlat.com)

Soon, Ocampo found himself regularly contributing photos to Malaya and We Forum, another publication of Burgos.

Ramon Ramirez, 68, was already an activist before martial law was declared.

“One morning, we turned on the radio for news and there was nothing. We tried the other radio and still there was no reception. It was impossible that both our radios were broken at the same time. We knew then that martial law had been declared,” he said.

Ramirez, or “Mang Mon” or “Monram” to his friends and colleagues, entered the University of the Philippines in 1961, where he received a scholarship under Eleuterio Go Memorial and the ESSO scholarship. He graduated from College of Engineering in 1966 and topped the electrical engineering board examinations the following year. 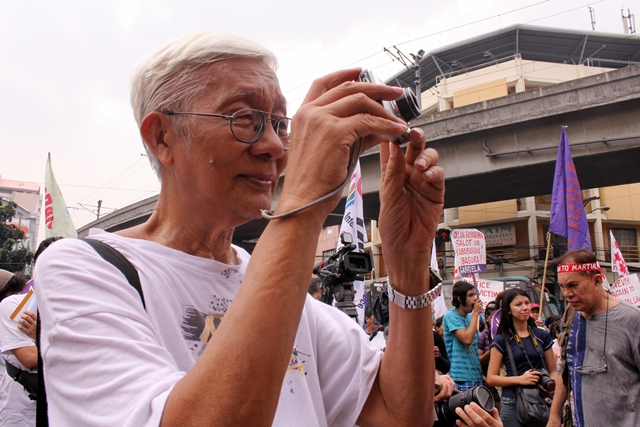 Monram takes photos of the 40th anniversary of the declaration of martial law (Photo by Janess Ann J. Ellao / bulatlat.com)

“Even during my college days, I was already interested in taking photos. I would take photos whenever there were fraternity gatherings and eventually when I joined the rallies of the First Quarter Storm,” he said.

Though working for big corporations as an engineer, Ramirez was also active in the people’s struggle. He joined the Samahan ng Makabayang Siyentipiko, a group of scientists and engineers from UP during the First Quarter Storm of the 1970s.

On January 5, 1973, Ramirez was arrested in Concepcion, Marikina while in a meeting with other youth leaders. “We were raided by members of ISAFP (Intelligence Service of the Armed Forces of the Philippines). We were brought to their office,” he said.

Ramirez said he was not as heavily tortured like others who were beaten up or electrocuted or both. But he had to go through mental torture. “They would threaten me with their guns. They would aim their revolvers at us and shoot us. But there were no bullets,” he said, describing the torture method called Russian roulette.

Even after martial law, Ramirez continued to be an activist. He was arrested again in December 1992, this time under former President Fidel Ramos. He was charged with murder, illegal possession of firearms and kidnapping. He was detained for three months.

In 1997, Ramirez founded the Arkibong Bayan, an online archive of photos, videos and statements released by people’s organizations. “It was an initiative to maximize the internet and reach out to Filipinos abroad,” he said, adding it was his son Karl, then a high school student, who taught him how to make a website. 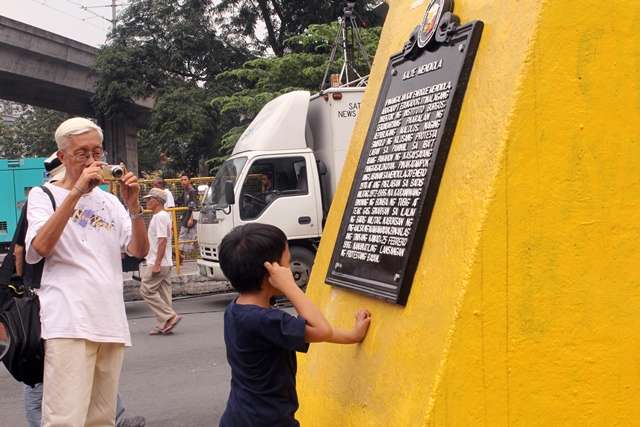 For his service to the people, Ramirez, along with Dr. June Pagaduan-Lopez, was awarded the University of Philippines Alumni Association Distinguished Awards for Social Cohesion in 2011.

Role of technology in the struggle

Through the lenses of his camera, Ramirez said that he had not only observed (and documented) how nothing seems to have changed in the system but also how technology plays an important role in the people’s struggle.

“In 1981, we were given a Casio pocket computer. I said, ‘what are we going to do with this?’ So for a few days, we used it only as a calculator,” Ramirez said. Later on, he added they realized they could program the computer to encipher and decipher messages.

Also in the 80s, Ramirez’s friend told him he has a “television” that they could not use. When he went there for a visit, he learned that it was an Apple computer. From then on, technology has become a medium for activists to launch their campaigns.

“When something new comes in, I always study it. And I would ask myself: ‘What’s in it for us? How would it be of help to us?’”

Now in the age of Facebook and other social networking sites, Ramirez has a very active account. “When young people discover I am active in Facebook, they find it weird that an old man like me uses it,” he said.

Ramirez said Facebook has a very wide reach and that it should be utilized to reach out to more people. “Some would complain that Arkibong Bayan is not that updated any more. I would tell them to visit either my Facebook account or Arkibong Bayan’s. And they would tell me they don’t know how to use Facebook,” he said in jest.

Old issues are the new news?

During the 40th anniversary of the declaration of martial law, both Ocampo and Ramirez took photographs of the protest action. Through their lenses, they see things in-depth.

While Ocampo now takes photos mainly for the Center for Media Freedom and Responsibility, a media watchdog, he said he was able to see how things basically remained the same during the imposition of martial law and now that democracy has supposedly been restored.

“There are variations. Sometimes, it would seem that things were getting better and then, it would only get worse,” he said. But he said it was “under GMA,” referring to former President Gloria Macapagal Arroyo, that “was the worst if you compare it to other regimes.”

Ocampo added there are still presidential decrees issued during martial law that remain in force up to now.

When asked if there are new issues that they did not have during martial law, Ramirez said it is mining. “During our time, whenever we have protests about the environment, it is mostly about deforestration.”

But on everything else, “The issues remain the same. We have the same calls then as the youth of today,” Ramirez said. “Only the details of these same issues have changed.”