‘If Harper truly respects the Filipino people’s sovereignty, he should be instrumental in the immediate pullout of Canadian mining corporations. We ask him to ‘mine his own business,’ if their capital will not benefit our communities and be detrimental to our ecological integrity and community welfare.’ – Kalikasan

MANILA – After his five-day trip to India, Canadian Prime Minister Stephen Harper flew to Manila Friday night for a two-day visit. He was to sign with Philippine President Benigno “Noynoy” Aquino III Nov 10 an agreement that would boost Canada’s sale of defense and security equipment. However, Harper was met with a protest action by environmental advocates who are demanding the pull out of Canadian mining firms and military troops guarding their operations.

Harper was to have lunch first with the Philippine president this Saturday before the signing ceremony. For dinner, he was to meet with business leaders. Accompanying him on his trip was his wife Laureen, Minister for International Trade Ed Fast, Minister for Natural Resources Joseph Oliver, Sen. Tobias Enverga Jr., the first Fil-Canadian senator, and some Fil-Canadian community leaders.

The memorandum of understanding the two heads of government are to sign “will ensure the smooth and expeditious procurement transactions with the Canadian government’s assurance on the quality of equipment from and compliance with procurement contracts by Canadian companies,” the DFA said.

The Canadian PM’s weekend trip to the Philippines was a first in the past 15 years. According to the DFA, “The two heads of government will discuss the upward trajectory of Philippines-Canada bilateral relations.” 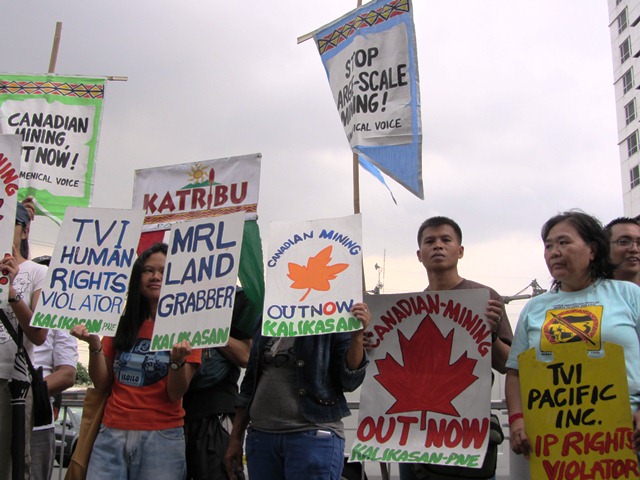 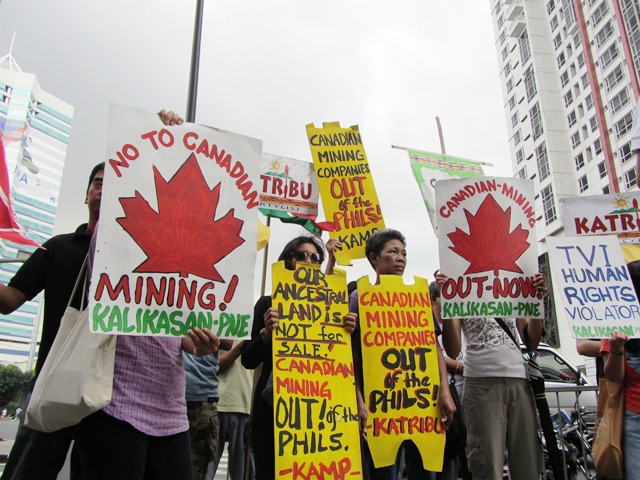 Harper told reporters he looked forward to “exploring ways of further strengthening ties between both countries.”

For various groups of environmentalists, farming communities and indigenous peoples, military-related equipment, quality-assured or not, are hardly for strengthening ties. They have long been calling for the pullout from their areas of large mining companies, some are Canadian, and the pullout as well of military troops that they say nearly always accompany mining operations.

In Makati City, in front of the tower building housing the embassy of Canada, green groups held a picket Friday, the day of the Canadian PM’s arrival. Though not in Harper’s schedule, these green groups pressed him to address the “long-standing environmental crimes of Canadian mining companies in the Philippines.”

Calling for the immediate pullout of errant Canadian mining companies from the country, the green groups challenged Harper to hasten the resolution of long-standing cases against known mining disasters inflicted by their companies. These groups brought petitions to remove and hold accountable the “past and present irresponsible Canadian companies such as Marcopper, TVIRD, MRL Gold and Crazy Horse.” The environmental advocates and peasant groups also demanded compensation for these Canadian mining companies for their environmental and social offenses to the Filipino people.

“The people will never forget the death of Boac River in Marinduque province when an estimated 1.6 million metric tons of toxic mine tailings inundated the river system in 1996. The Marcopper Mining Corporation, a subsidiary of Canadian company Placer Dome and the perpetrator of the disaster, has yet to indemnify the hundreds of victim families 16 years later,” said Clemente Bautista, national coordinator of Kalikasan PNE.

Boac River used to be the source of livelihood of hundreds of families, but because of the Marcopper mine spill, it was declared as biologically dead. Residents suffer from skin and respiratory problems, their water is contaminated, their homes and livelihood destroyed. At least three children were reported also to have died of heavy metal poisoning.

Majority shares of Placer Dome were acquired in 2006 by Barrick Gold, another Canadian mining company.

“Harper should note that his country’s mining giants are violating environment and human rights standards, contrary to what they advertised. TVIRD, the local affiliate of Canadian miner TVI Pacific, had two mine tailings spilling incidents in 2004 and 2007 at its Canatuan gold project in Siocon, Zamboanga del Norte. It is also implicated in various incidents of human rights violations, including the recent frustrated murder of Subanen tribal chieftain Timuay Locenio Manda,” said Bautista.

The attempted assassination of Manda resulted in the death of his 11 year-old son, Jordan. TVIRD personnel were also involved in other incidences of violent human rights violations, such as the killing of a small-scale miner, Wilbert Catampungan, and the wounding of his two companions only this July.

“While these atrocities made by Canadian mining firms continue to occur as we speak, more Canadian miners are pouring into the country. In Batangas province, two Canadian companies doing open-pit mining Crazy Horse and MRL Gold, will cover critical upland forest ecosystems and fertile agricultural lands if their projects push through. They can adversely affect the rich Batangas Bay and the Verde Island Passage, declared by marine biologists as the Center of Marine Shorefish Biodiversity in 2006,” lamented Bautista.

The mine project of Crazy Horse, covering 4,085.9202 hectares of land, have been approved by the Mines and Geosciences Bureau for conversion into a Financial and Technical Assistance Agreement (FTAA), which Bautista said will “allow for 100-percent foreign ownership of Batangas’ land and give Crazy Horse incentives and auxiliary rights that will deplete the country’s mineral patrimony at the expense of the environment.”

“It is clear that from Marcopper to Crazy Horse, irresponsible Canadian mining has never improved and is still wreaking havoc in our country. If Harper truly respects the Filipino people’s sovereignty, he should be instrumental in the immediate pullout of these mining corporations,” Bautista said. His group ask Harper to ‘mine his own business’ if their foreign capital will not benefit the Philippine communities and be detrimental to its ecological integrity and community welfare.”

“The gross inaction of Pres. Benigno Aquino III on the growing number of environmental and human rights crimes from all mining corporations does not help in the plight of affected communities. Aquino must also be held accountable for perpetrating this culture of impunity towards opponents of destructive mining and other environmental activists,” said Fr. Oliver Castor, spokesperson of TF-JED.