John Doe arrest warrants are deemed by human rights lawyers as highly irregular because it does not contain the names of the alleged perpetrators and are used to arrest just about anybody.

MANILA – Is the Aquino government renewing the use of John Doe-named warrants of arrest previously used by the Macapagal-Arroyo government? Three cases have been recorded so far in just one week leading to Dec 10 Human Rights Day. On Dec 3, two organizers of public sector employees’ confederation COURAGE were arrested in separate incidents in Metro Manila and were later surfaced in Camarines Norte. On Nov 29, a former community organizer in Palawan and now a resident of Rizal was arrested in his house in Cainta by the Rizal police. In all arrests, a human rights lawyer said there were irregularities.

Wilson ‘Bogs’ Manggao, a father of two and in his early 30s, was arrested by the Cainta police on Nov 29 by reason of a warrant of arrest issued on February 20, 2008 by the Regional Trial Court of Palawan, Branch 49, for murder. He was allegedly part of the NPA team that abducted and eventually killed a certain Agustin Alvarez in Brgy. Marutinas, Puerto Princesa City on January 17, 2003.

The arrest surprised Wilson Manggao and his wife, who said they had nothing to do with the alleged crime.

Manggao’s wife Christine used to work with Karapatan (Karapatan Human Rights Alliance) in Palawan. Wilson Manggao, meanwhile, used to be a community organizer in Puerto Princesa. Since five years ago, the couple has resettled at Rizal province after the situation in Palawan became too difficult for human rights workers. Christine now works at Harris College, a Methodist college in Taytay, Rizal; Wilson has no regular job yet. The couple said they were shocked to hear about the arrest warrant for Wilson for a crime allegedly committed nine years ago. 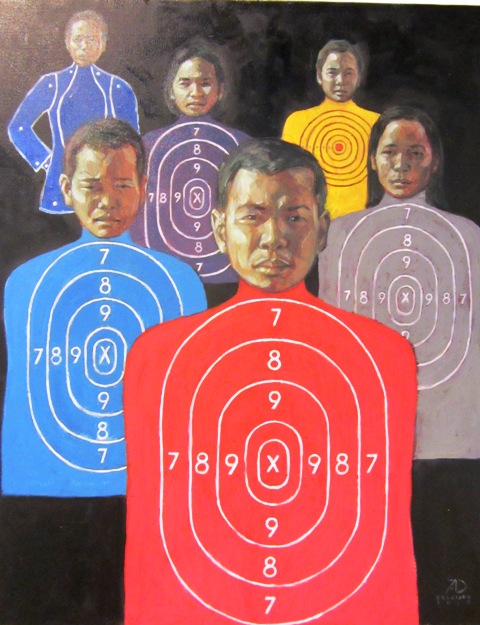 The perpetrators of the said offense were listed as “John Does.” But a witness reportedly under military protection surfaced on February 1, 2008 and supplied the names of the supposed perpetrators.

According to lawyer Remigio Saladero Jr., no preliminary investigation was conducted by the Prosecutor’s Office of Puerto Princesa before the Information and warrant of arrest were amended to include one “Wilson Mangao” alias “Ka Macmac”.

Lawyer Saladero said the warrant for Wilson’s arrest is defective because it does not give his name correctly. It was issued for one “Wilson Mangao;” Wilson’s correct name is “Wilson Manggao”.

Wilson’s wife, assisted by the Rizal National Union of People’s Lawyers ( NUPL-Rizal), filed a petition for habeas corpus before the Court of Appeals last December 11, 2012, one day after International Human Rights Day.

Her petition for habeas corpus said Wilson’s arrest was illegal because the warrant does not contain his correct name, and it had been issued without any preliminary investigation conducted on the case. The petition says “It is necessary to afford adequate protection to the constitutional rights of petitioner’s husband and prevent the strong arm of the law from being used in an oppressive and vindictive manner.”

Christine Manggao requested the Court of Appeals to issue a writ of habeas corpus for Wilson Manggao and, after due proceedings, that he be released from detention.

Wilson’s case is reminiscent of the case of 72 political activists, popularly called the ST 72, in 2008, where a “John Doe” warrant was also issued initially, but were later amended to include the names of 71 suspects after a supposed “deep penetration agent” of the military surfaced. As in Wilson’s case, the ST case did not also undergo preliminary investigation. The warrant also contains erroneous names and addresses of the 71 accused.

“The resurgence of John Doe arrest warrants is disturbing”, lawyer Remigio Saladero Jr., one of Wilson’s lawyers and a member of the ST 72, told Bulatlat.com. “It forebodes something sinister in President Benigno “Noynoy” Aquino III’s counter-insurgency program.” Saladero urges human rights defenders and activists to “strongly condemn this development in the Aquino administration’s Oplan Bayanihan.”