MANILA – If all the hoopla surrounding the promises of President Benigno “Noynoy” Aquino III were to be measured today by his stance on mining policy alone, it would be in tatters by now, based on the revelations of various groups studying the impact of large-scale mining to Filipinos and the environment.

“Halfway into his term as President, Aquino is fully stripped of his charade on mining. Destructive and plunderous mines get the upper hand in the EO 79,” said Kakay Tolentino, secretary general of indigenous peoples’ Katribu Partylist. Tolentino is referring to Aquino’s new mining policy unveiled in July last year. Despite its packaging as a supposed answer or resolution to the ugliest facets of Mining Act of 1995, which were also the most criticized over the years, the mining EO’s true intent was revealed this year when Aquino started using its provisions to try to override legislations by local government units banning destructive mining.

“Philex and Xstrata are the shining examples,” Tolentino said of Aquino’s charade at going after a “viable mining policy.” 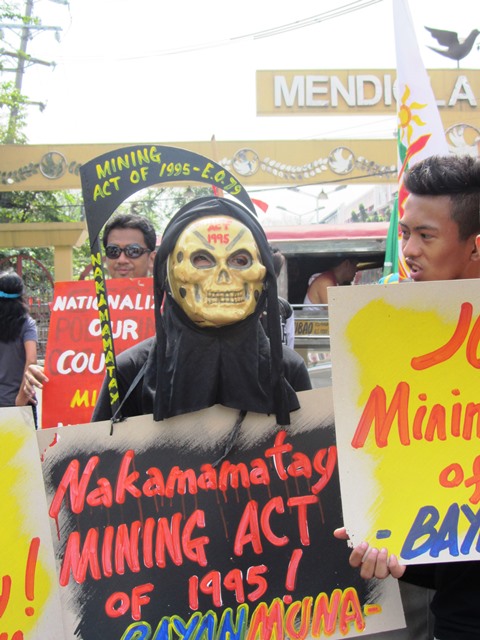 Green groups depict the image of Mining Act to communities in a rally March 4 in Manila (Photo by Marya Salamat / bulatlat.com)

Note that after Philex’s 20.6 million metric tons of mine spill last year, which happened a month after Aquino signed his Mining EO Number 79, the catchphrase “viable” mining policy started to be heard over Philex’s mine spill-drowned claims of “responsible mining.” In November last year, at the annual conference of big mining companies operating in the Philippines, they awarded Philex for its mining practices even as they used the police to beat back the protesters outside the hotel premises where they were meeting.

Philex was allowed to resume operations almost seven months after it was shut down due to a massive tailings spill. It had released more than 20 million metric tons of mine waste into the previously pristine Balog River in August last year. Environmental experts now claim that approximately one million of that wastes seem evident in the confluence of Balog and Agno River, and the rest are more likely hidden along the river and at San Roque Dam. Experts warned its presence would be felt later when the dam overflows and worsens flooding, or when it unloads some of the toxic wastes into the irrigation system, or when, due to the sediments, the dam suffers reduced capacity at generating power.

The Xstrata-controlled SMI, on the other hand, was given an Environmental Compliance Certificate (ECC) recently after the Office of the President reportedly told the environment bureau to stop withholding its ECC.

Both are large mining operations with confirmed deadly impact, plus more disasters-in-the-making on its horizon. More worryingly, estimates pegged that Philex, with all its sins of repeated mine spills, is more than a hundred times smaller than the mining operations set to be started by Xstrata in Mindanao.

With Mining Act supported by Mining EO 79, “The Filipino people are left with nothing but a degraded environment and a pillaged patrimony,” Katribu said in a statement.

Disasters are not economic development

As the Philippine Mining Act turns 18 years old, progressive environmental groups decried Aquino’s coddling of “irresponsible miners.” They demand the scrapping of the national mining policy that they blame as responsible for “clearing the path for foreign exploitation of the country’s mineral resources.”

Aquino signed Executive Order 79 on July 2012 purportedly to implement reforms and ensure environmental protection and responsible mining. But as green groups suspected, it was just for show. Kalikasan PNE has documented that since the implementation of the Mining EO, at least 3 mining disasters have occurred – pollution of rivers in Sofronio Española, Palawan by Citinickel Mines and Development Corporation; a series of mine spills and tailings dam collapse in the Philex gold mining in Benguet on August to October 2012; and a landslide in coal mining of Semirara Mining Corp in Antique last February 13.

These three are disasters easily discernible as directly related to mining operations. Apart from these, there were disasters attributable to environmental degradation also partly due to large-scale mining, logging and aggressive expansion of agribusinesses. Typhoon Pablo, for example, ravaged parts of Mindanao reportedly denuded by foreign large plantations and mining operations. 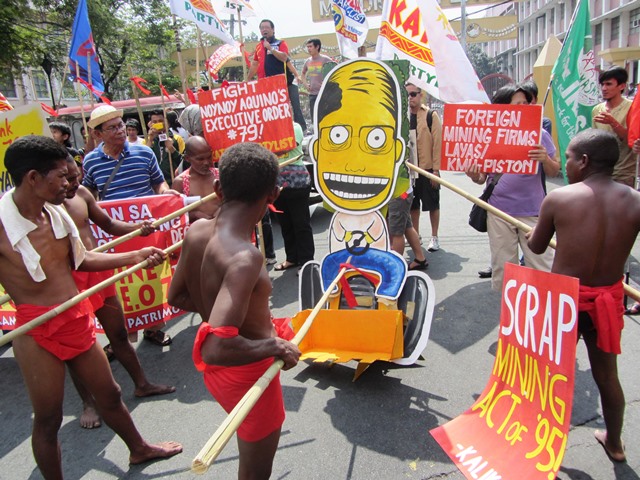 Aeta leaders demonstrated an example of indigenous peoples’ responses at what they call as government’s declaration of war, for large mining companies, against IPs (Photo by Marya Salamat / bulatlat.com)

In a statement, Bayan Muna Partylist reminded Aquino that some of the worst environment disasters in the past few decades are due to large-scale mining operations. Bayan Muna Partylist Rep. Neri Colmenares said the Marcopper mining disaster in 1996, one of the country’s worst industrial accidents to date, has left the Boac River biologically dead and its people afflicted with diseases linked to mine wastes.

The Rapu-Rapu mine accident in 2005 caused one of the country’s worst mining-related fish kills, crossing over from Albay Gulf to Sorsogon Bay. Recently, the Philex Mine tailings spill has polluted main river systems in the Cordillera where communities source their water. Colmenares reiterated that other phenomenon related to mining operations in local communities, such as land subsidence, acid mine drainage, and landslides, have been documented with increasing frequency over the past years. “The damage done to the country’s mountainous, agricultural, and aquatic ecosystems has been immense,” Colmenares said.

The regimes that implemented the Mining Act always cited the economic benefits to be derived from mining. Yet, researches showed how communities where large-scale mining companies have been operating continue to be among the poorest.

Based on government data itself from 2000 to 2009, the average contribution of mining to the GDP was only 0.91 percent, 2.5 percent to total investments and only 0.38 percent to total employment. The ratio of government tax collection from mining to the total mineral production also shows minimal contribution, as the government only collected 7.6 percent or P64.2 billion ($1.565 billion) of the mining industry’s total mineral production of P842 billion ($20.536 billion) from 1997 to 2010.

“The promises of the Mining Act of 1995 to create jobs is a failure, producing only 5.36 percent of its target of 239,000 employment in 2008 not to mention the physical and economic displacement, sufferings and human rights violations that have been brought to the people,” Colmenares said.

Worse, as mine workers have previously shared in various fact-finding missions, workers in mining are not only in grave danger from accidents and toxic substances, they also suffer low wages, insecure status on the job and abject working conditions,
But for progressive green groups, the Aquino administration’s sought-after but meager three percent increase in government share on income in mining is not at all the answer to Mining Act’s basic flaws. This is nothing compared to lost lives, livelihoods and homes of thousands of Filipinos, according to Colmenares. Besides, Colmenares told Bulatlat.com that mining companies do not reveal their true earnings.

“The disasters and violations of environmental laws reported in the last 18 years prove the futility of the country’s current mining law. The Mining Act and the mining EO favor the interests of big miners, rather than protect our communities and the environment,” Bautista of Kalikasan PNE said.

The only light at the end of the tunnel, according to green groups, is promoting “a nationalist mining industry that can truly benefit the Filipino people,” as Bautista said.

Bautista urged the Filipino people to help resist the ongoing plunder of Philippine resources “by using their electoral power and ensuring that pro-foreign mining candidates are not placed in power.”

In a statement, Defend Patrimony, a multisectoral network against mining liberalization, urged the public to “further widen and intensify their struggle in the mountains, streets and communities to defend their land, lives and resources and push for this nationalist mining industry.”