Is this the smoking gun that would force the Armed Forces of the Philippines to finally surface Jonas?

MANILA – Three days after the 43rd birthday of missing activist Jonas Burgos, his family went back to the Supreme Court in an effort to find him.

With new pieces of evidence at hand, Mrs. Edita Burgos, accompanied by her son JL and supporters from human rights group Karapatan, filed an urgent ex parte motion seeking to refer the case back to the Court of Appeals for further hearing.

Jonas’s brother, JL, said a source who has requested anonymity provided them a photograph of Jonas taken days after he was abducted and documents that would prove that an intelligence unit of the 7th Infantry Division of the Philippine Army and the 56th Infantry Battalion operating together abducted Jonas Burgos on April 28, 2007 at the Ever Gotesco Mall, Commonwealth Avenue, Quezon City.

“We submit to the judicial process and offer this uncovered evidence to the courts,” Mrs. Burgos said. “We plead to the President, the Supreme Court to act on this petition.”

The photograph shows Jonas wearing a white shirt, a black handkerchief hung around his neck. His eyes look tired. Behind him is a concrete unpainted wall. 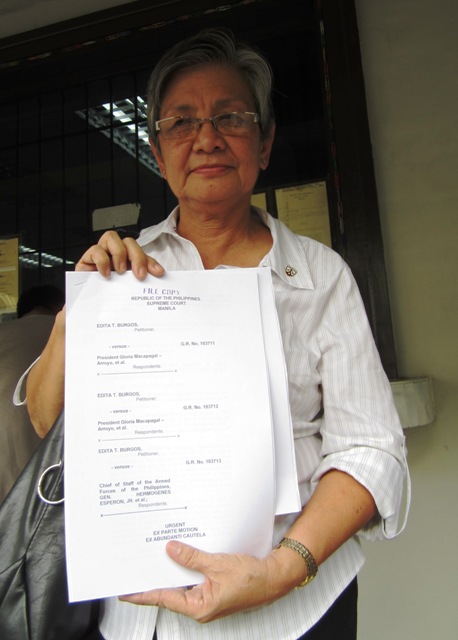 Mrs. Burgos said she and other family members were shocked the first time they saw the photograph. JL admitted he cried upon seeing it.

Documentary evidence submitted to the high court include: After Apprehension Report, Psycho Social Processing Report, Autobiography of Jonas Burgos that, according to the family, are all copies of confidential official reports on file with the Philippine Army.

Recently, the Court of Appeals Special 7th Division ruled that the military is accountable for the enforced disappearance of Jonas. The appellate court, in its decision on the writ of amparo petition and writ of habeas corpus filed by Mrs. Burgos, also held Army Maj. Harry Baliaga Jr. responsible for the crime.

In her new petition, Mrs. Burgos said the new discovered evidence can be cross checked and validated with the complete list of the officers and men of the 56th IB, 69th IB and 7th Infantry Division from June 2004 to June 2007. In a resolution dated July 5, 2011, the high court ordered the Armed Forces of the Philippines (AFP) to produce Jonas and to submit the complete list of military personnel under the said units, together with their respective profiles, summary of information and pictures, among others, exclusively to the Supreme Court.

“The newly discovered evidence will prove that …these units captured and interrogated Jonas and based on the same evidence, could probably continue to detain him or God forbid, had disposed of him in the manner that only they could explain,” the mother of Jonas said.

The petition also seeks an order from the high court to implead the persons named in the sealed documents in the writ of amparo petition, and to issue a writ of amparo on the same persons.

The family refused to provide any details about the source of the new evidence for security reasons.

“I cannot tell any detail. Our source’s life is in danger,” JL told Bulatlat.com.

The family appealed to those involved to come out and tell the truth.

“We offer prayers for those involved that they may be enlightened and they would have the courage to say the truth,” Mrs. Burgos said.

JL called on perpetrators to “come out clean. “It’s never too late to right the wrongs,” he said.

Año, then colonel, was with the Intelligence Service Group of the Philippine Army at the time of the abduction of Jonas. He is among the respondents to charges of arbitrary detention and possibly murder filed by Mrs. Burgos in June 2011.

In December 2012, Aquino appointed Año as the new chief of the Intelligence Services of the Armed Forces of the Philippines (Isafp). His promotion, however, has been deferred by the Commission on Appointments of Congress due to a protest filed by the Burgos family.

Palabay warned that Baliaga should not end up like retired Gen. Jovito Palparan Jr. who remains at-large more than one year after a warrant of arrest was issued for his arrest.

Palparan and three other military personnel have been charged with serious illegal detention and kidnapping in relation to the enforced disappearance of University of the Philippines (UP) students Karen Empeno and Sherlyn Cadapan.

“The Aquino government should see through that the process ends up in the prosecution and jailing of all those responsible for the human rights violations committed against the people,” Palabay said.

In a statement, the National Union of Peoples’ Lawyers (NUPL), an organization of peoples’ lawyers, said Baliaga is just representative of the perpetrators.

“There are several others out there who are both accountable and responsible, ready to pounce on others. The abduction and disappearance of Jonas is undoubtedly a planned and orchestrated operation involving several personnel,” Edre Olalia, NUPL secretary general, said.

“It just cannot happen without the acquiescence, tolerance, encouragement, knowledge, orders or instruction of other personnel and higher military officials, some of whom may have been conveniently transferred while others have already been promoted,” Olalia said.

A slap at the AFP

The NUPL deemed that the CA decision is “highly significant because it again judicially validates what human rights defenders and several national and international rights groups have been saying all along: that enforced disappearances – and extrajudicial killings and torture — are systematically perpetrated and perpetuated by the military and State forces.

Palabay also said the CA decision is also an affirmation of the practice of state security forces to abduct and forcibly disappear persons whom they brand as ‘enemies of the state.’ Such practice, she said, is still being done under President Noynoy Aquino’s counter-insurgency program Oplan Bayanihan.

Karapatan has documented 14 victims of enforced disappearance under the Aquino administration.

“Right now, we do not know where Jonas is,” JL said. “The measure of success is finding Jonas.”