This year, private water concessionaires are up for ‘rate rebasing,’ meaning they would substantially increase water rates to pass on the costs of their planned projects, some of which would not be implemented but will be charged to consumers anyway. This is aside from the usual rate increases.

These proposed hikes are huge and unnecessary, the Water for the People Network (WPN) said in a statement. The two water firms, in fact, should be refunding the consumers, the network added.

In a forum at UP Diliman last week, Arnold Padilla of WPN explained that the increase the water companies are asking for is nearly a third of Manila Water’s current basic charge, and more than a fifth of Maynilad’s basic charge. Worse, the actual increases would be even more costly for the people, Padilla said. Add to the basic water charge the environmental charge, plus FCA (foreign currency adjustment), plus 12-percent VAT, and the total increase would amount to P7.81 ($0.18) per cubic meter for Manila Water and P13.71 ($0.32) per cubic meter for Maynilad. 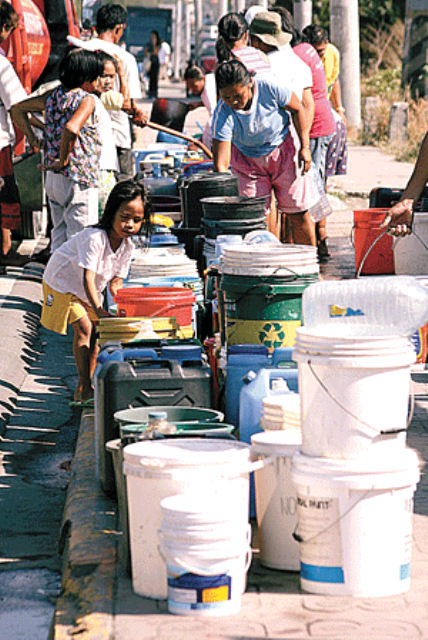 Given the country’s persistent joblessness (highest in Metro Manila) and low wages, the high cost of water, a very basic necessity, is a fearsome prospect to many. The United Nations said: water expenses should not exceed 2 percent of wages. But for poor Filipinos who earn P110 to P 684/day ($2.59 to $16.10), expenses on water could go as high as twice or seven times the UN prescription, said Sonny Africa of Ibon Foundation.

Lawyer Emmanuel Caparas, chief regulator of the government’s MWSS (Manila Waterworks and Sewerage System), said shortly before the first consultation began last Tuesday June 11 that they are taking their job as regulator “seriously,” and that is why they are also holding public consultations. He said in Filipino that these are just “initial steps.” They would follow it up with other measures “to make it more transparent.”

But various groups such as the Bagong Alyansang Makabayan-NCR and the Kilusang Mayo Uno (KMU) warned the public that in fact, these consultations are “just for show.” They pelted with water an image of President Benigno “Noynoy” Aquino III in a protest action outside of the Philippine Training and Trade Center in Roxas Blvd last Tuesday, as Maynilad and leaders of the MWSS were holding the first public consultation. The second public consultation held today in Innotech at Commonwealth Avenue was also marked by denunciations of the proposed hike and the Aquino government’s perceived close links to the business groups controlling the private water firms.

In these public consultations, the public are treated as mere audience to be informed. As researchers into government transparency had previously noted in a survey of government processes last year, the government seems to define transparency as just sharing information, and not necessarily allowing participation. “Water consumers are relegated to the sidelines, without much say in this rate rebasing process, except for perfunctory public consultations,” Gabriela Women Party Rep. Luzviminda Ilagan said in a statement.

In fact, Caparas of MWSS himself said in Filipino that with the start of public consultations, they are “already nearing the end or conclusion of the process for deciding on the water rate hike.”

“We’re at the tail-end of the decision process (on rate rebasing),” he told a radio reporter shortly before the consultation started this week.

Based on the study of WPN, rate rebasing every five years is provided for by the public-private water service contract signed in 1997. It is an occasion where the private water firms can raise their basic charge “bigger than usual.” The usual rate hikes include the water firms’ yearly and quarterly rate adjustments against inflation, currency fluctuation, etc. They also charge to consumers their environmental expenses.

In rate rebasing, water concessionaires compute what they say they need to charge their consumers to implement their plans and projects.

All in all, as the 16 years of water privatization so far have shown, consumers are actually the ones paying for the investments and plans as well as the risks and costs reportedly being incurred in the process of bringing water to them, plus taxes. Worse, consumers are also being made to pay for unimplemented projects and other questionable charges, the WPN said.

Padilla said in a forum last week that in the rate rebasing in 2003 and 2008, the water firms included as bases for rate hikes projects that it failed to implement. For example, in 2003, the water firms charged for the P732-million ($17.2 million) Wawa Dam Project, P52-million ($1.22 million) feasibility study for the Laiban Dam Project, and P110-million ($2.6 million) Water Supply Project in Laguna Lake. All such projects were shelved.

In 2008, the water firms charged the consumers for projects that were also not implemented. These include the P5.4-billion ($127.1 million) 15-cms Angat Reliability Project, the P45.3-billion ($1.1 billion) Laiban Dam Project and the P4.13-billion ($97.2 million) Earthquake Contingency Project.

“We brought these up with government regulators, but they told us that these are being corrected anyway. So the fees just get higher every time,” Padilla said.

Meanwhile, all the profits go to the private water firms controlled by the Ayalas and Metro Pacific led by Manny Pangilinan.

“In all countries of Asia we have one of the highest water rates, highest electricity rate, highest unemployment rate,” Arnold Padilla of WPN said in a forum late last week.

How did all these come about? Since 1997, “the basic water charge we pay is now seven to 12 times bigger compared to pre-privatization,” Padilla said.

Metro Manila’s water privatization was begun under the Ramos administration. Ramos had promised then that the fee would go down with privatization, and the services would expand and improve. He raised water rates from P5 to P8 ($0.19) before starting the bidding process for the concession agreement. The first few years under the private water concessionaires, the water fees were brought down to levels before Ramos raised it, but after that, prices have steadily climbed.

According to the WPN, it was the World Bank via the IFC, then the consultant of Ramos, which drafted the concession agreement (or the PPP in water). “If it’s the creditors themselves who drafted the agreement, they will make sure the contract has sure, regular rate increases (rate rebasing every 5 years is just one of them),” Padilla said.

So the contract agreement shields the private water firms from inflation (allowing them to charge inflation adjustments every year to the basic charge), from exchange rate fluctuations, and from the nasty effects on the business by extraordinary events such as calamities, coup d etat, extraordinary financial crisis, etc., the WPN said.

This means the private water firms’ operation is “really protected,” said Padilla. But the ordinary citizens as paying consumers are not. They are not just paying for the water they consume, they are also paying for the investments and risks in running the water business.

Maynilad and Manila Water are already enjoying higher than average returns on equity (22 percent for Manila Water and 60 percent for Maynilad) chiefly because, according to the WPN, the two have financed much of the cost of operating the water firms by loans that they eventually passed on to the consumers.

“Consumers have been at the losing end of the privatization deal. Now that private concessionaires Manila Water and Maynilad have both filed P5.83 ($0.14) and P10.30 ($0.25) per cubic meter rate adjustments respectively, they are once more set to rob consumers in broad daylight despite having failed to comply with contract commitments to improve the delivery of water services,” said Gabriela Women’s Party Rep. Luzviminda Ilagan.

“Water is a necessity. Access to clean and potable water is in fact a right,” said Rep. Emmi de Jesus also of Gabriela Women’s Party. She warned that this additional burden of water rate increases amid increasing costs of basic commodities, power rate hikes and oil price increases is like a death blow to poor families. She questioned why the Aquino government is allowing the full implementation and operation of this “uneven water privatization contract.”

The WPN is also questioning how come the concession agreement with Maynilad and Manila water were extended for another 15 years from the original 25 years, when it had not satisfactorily complied with the standard performance stated in the contract agreement. 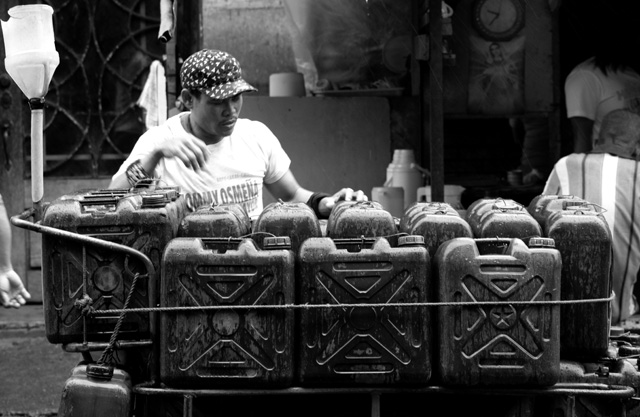 Research of the WPN in four separate communities in Metro Manila belied the water companies’ boast of 24/7 availability of water and nearly universal coverage of water supply. For example, in Bgy. Pansol, a community right behind the headquarters of MWSS in Quezon City, besides the subdivisions of Ayala Heights and La Vista, roughly 80 percent of households have water connections, but not all of them have individual meters, said Sonny Africa, head of economic thinktank Ibon Foundation.

In the villages of San Roque at Bagong Pag-Asa, QC, in Pilar village in Makati City, and in some villages in Taguig, Africa noted that “water service comes from Boysen” (a can of paint recycled as container for water, sold per container). In parts of Moriones, Tondo, an area named after a Spanish governor-general who first installed water pipes, many of the residents also buy water delivered in cans, while others have joint connections.

In these cases, Africa said, they found out that water is more expensive, and maybe even unsafe.

Padilla added that evidences of unimproved services also abound, with ruptured, antiquated pipes being reported from time to time. He cited the case of flooding in Edsa in 2010, which was caused by a ruptured pipe, a similar case happened in Las Piñas in 2012, and in Mandaluyong this year. He said the additional costs for repairing these may have been charged also to consumers.

Little wonder then, that Maynilad and Manila Water increase its profits yearly by some 44-percent, Padilla said. “Their operations are that profitable they’re expanding now outside of Metro Manila, for example in Boracay in Panay, Clark, Pampanga, Laguna, and abroad (Vietnam).

No hope Aquino will protect consumers from water rate hikes

Paulo Quiza, Bayan-NCR deputy secretary-general, urged the public to support or join protests against the proposed hikes, as Aquino will not likely protect the consumers from the proposed “highway robbery.” In their rally, they pointed to how the government benefits from water price adjustments. The most obvious of which is through Value Added Tax.

According to Quiza, they are not expecting the Aquino government to block the proposals of the two water concessionaires because it is directly benefiting from the Value Added Tax (VAT) collection from the water utility. As of the first quarter of 2013, approximately P10.98 million ($267 thousand) in VAT has been collected from the water sector on a daily basis. He said the government is hell-bent on collecting more taxes on water to cover foreign debt servicing.
Aquino has been praised by lenders precisely because of his government’s assurance of continuing debt servicing.

“As we expect nothing from the President and his administration on this issue, we call on all water consumers to collectively act against the looming price increase of water and other basic utilities and services by taking up all forms of protests,” Quiza said.

The group warned President Aquino, Maynilad and Manila Water, that they would hold more protest actions during the series of ‘public consultations’ onwards to Aquino’s 4th State of the Nation Address on July 22.