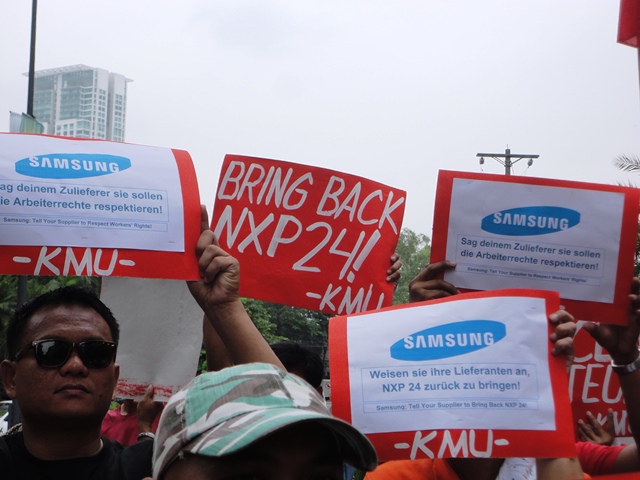 MAKATI City — Filipino workers of one of the biggest electronics firms in the world picketed a government-employers’ forum on Corporate Social Responsibility in Makati City Sept. 3. They lodged an appeal for their reinstatement to one of the companies present.

Workers of NXP-Philippines whose 24 union leaders were illegally dismissed last May 5 urged the representative of Samsung, to which NXP is supplying microchips, to tell NXP to stop its union-busting drive in the Philippines and reinstate the union officials.

The Samsung representative was attending the “Asian Forum on Corporate Social Responsibility” held at the Makati Shangri-La Hotel. Their coming together was advertised also as a forum where they discussed building “resilient communities” amid disasters.

“It’s almost four months since we were illegally dismissed and there’s still no justice for us,” said Reden Alcantara, president of the NXP Semiconductors Cabuyao, Incorporated Workers’ Union.

The NXP management has claimed that the workers held illegal strikes on April 9, 17, and 19 and May 1, but the union denied it, saying the workers simply spent the said dates as regular holidays with their families and friends.

“The truth is that big capitalists like to engage in CSR projects when they give very little to society and even less to their workers. Many carry out CSR projects as publicity stunts and as ways to explore business opportunities, without improving the plight of their workers,” said Roger Soluta, secretary-general of national labor center Kilusang Mayo Uno, to which NXPSCIWU is affiliated.

The workers have been negotiating with the NXP management for a Collective Bargaining Agreement, demanding a wage hike higher than the increase contained in the previous CBA and the regularization of contractuals, when the 24 union officials were illegally dismissed. 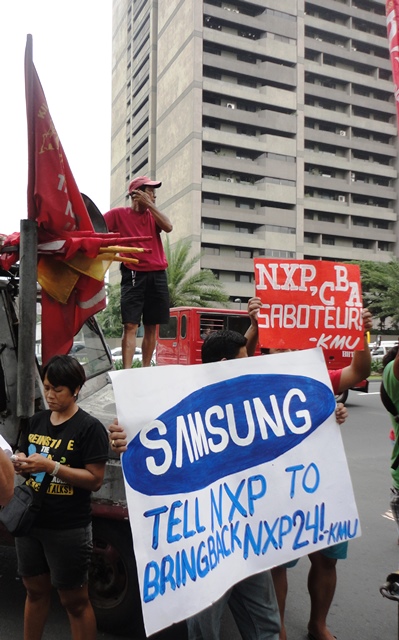 “It is clear that the 24 union officials were dismissed not because the workers held illegal strikes but because the management wants to deny workers a higher wage hike and the regularization of contractuals,” Soluta said.

The Department of Labor and Employment has so far proposed to reinstate 12 of the 24 sacked union officials and hike wages nearly close to the level asked by workers.

(Text and photos from contributors)