The local governments and their family members were the first that came to aid majority of affected residents when Typhoon Yolanda struck their communities last year, according to a survey.

The survey, conducted by IBON in six provinces of hardest-hit Eastern Visayas, shows that immediate relief and rescue by the local government units (LGUs) was felt most by 59% of the 1,094 respondents. This is followed by aid from their relatives with 41% of respondents. Others that came to their aid were local NGOs and foreign NGOs (24.5%), church workers and other religious groups (13.6%), friends (11.9%), and private individuals unrelated to them (11.4%). Only 10% said that they felt immediate aid from the national government.

Beyond immediate relief and rescue, 42.5% of the respondents identified the local government as continuously providing aid for the affected families, followed by their relatives (35.6%). Foreign and local NGOs were also cited by 19.9% and 15.4% of the respondents respectively. However, it is significant to note that there is a 27.5% share of respondents who said that nobody provided continuous aid to them after Typhoon Yolanda.

The survey, which aimed to study the impact of Typhoon Yolanda, was conducted from September 26 to October 8 in the provinces of Biliran, Eastern Samar, Leyte, Northern Samar, Western Samar, and Southern Leyte. The survey has a total of 1,094 respondents and has a margin of error of plus or minus three percent.

Below is the tabulation of the respondents’ perception on the immediate and continuous aid that they received after Typhoon Yolanda hit their communities. 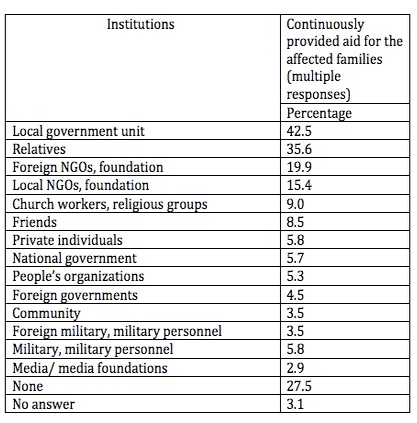