“Aquino’s disregard for the lives of Filipinos is shown not only by the January 25 incident in Mamasapano but by his Cheap Labor Policy.”

MANILA – Angry that the country’s president has treated Filipinos as if they were cannon fodder of US government in its borderless war on terror, and the Filipino workers as if they were more abject wage slaves whose “poverty threshold” can be tinkered with to please investors with lower minimum/floor wages, organized workers from the public and private sector staged picket protests and rallies in various locations nationwide today, Feb 17.

“Aquino’s disregard for the lives of Filipinos is shown not only by the January 25 incident in Mamasapano but by his Cheap Labor Policy,” Lito Ustarez, KMU vice-chairperson, said in a statement. He commended the calls aired not just by workers’ groups but by other sectors as well for President Aquino’s resignation.


In the capital, workers led by Kilusang Mayo Uno marched from Taft Avenue and eventually held a picket in front of the National Wages and Productivity Commission (NWPC) on Malvar St.

The labor group condemned the entire package of neoliberal policies imposed and approved by a succession of “puppet governments,” of which, they said, Noynoy Aquino is just the latest and worst. They condemned the policies that deregulated and passed to profit-seeking conglomerates vital industries, services and utilities, which result in spiraling prices of fuel products, health and education, water, power, telecom services and train fares, among others. And amid all that, the workers’ group decried what they described as continuing “attacks” on the minimum wage.

Since the formation of regional wage boards with the enactment of Wage Rationalization Law of 1989, minimum wages in the Philippines continued to shrink vis- à-vis the family’s needs to live decently, and vis-à-vis reported profits especially of the country’s biggest establishments.

According to thiktank Ibon Philippines, “the minimum wage is to begin with less than half the estimated family living wage. This is aggravated by how wage hikes are so few and small that the minimum wage is barely able to keep up with the rising cost of living.” The thinktank said wages have also been falling in real value since 2012.

President Noynoy Aquino has not improved the workers’ wages, even after promising in his inaugural speech that the Filipinos can start dreaming again. On the contrary, as workers’ groups said, his administration contributed its share of policies to implement imperialist neoliberal attacks on the people. For workers these attacks aggravated in 2012 with the two-tiered wage policy.

Leaders of KMU’s regional chapters said in past interviews that if Aquino’s administration succeeded in fully implementing it, his contribution in the succeeding governments’ tamping down on wages would mean lower than the persistently decried as meager minimum wages (this time it is called “floor” wages, giving rise to bitter jokes among workers, and, also, lessening or fully eliminating the possibility of getting substantial hikes through “toothless productivity” councils).

Ustarez of KMU said Aquino is responsible for increasing the gap between the NCR minimum wage and the Family Living Wage. The gap, he said, is definitely bigger for the minimum wages in regions outside Metro Manila, where mandated minimum wages are lower. 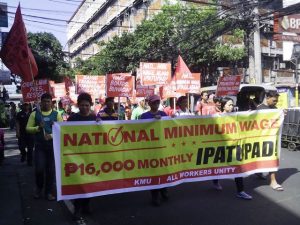 KMU and the All-Workers’ Unity are countering the attacks on minimum wages with their proposed National Minimum Wage of at least P16,000 ($362) monthly. They reasoned that the minimum wage in NCR, for example, stands at P466 ($10.55) while the Family Living Wage, the amount needed daily by an average Filipino family to live decently, according to Ibon Foundation, already stood at P1,086 ($24.58) in August 2014.