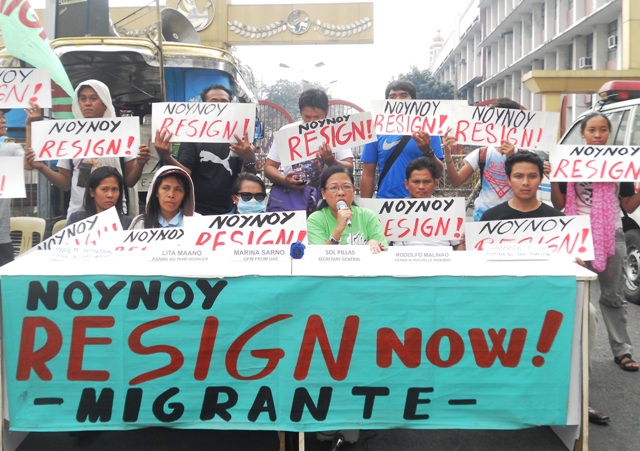 Migrante said that since Pres. Aquino took office, OFWs and their families have borne witness to his government’s criminal neglect and incompetence.

MANILA – President Benigno S. Aquino III has been negligent and inefficient, has caused danger and distress to OFWs, and has been buck-passing long before the Mamasapano incident.

This was the lament of the repatriated overseas Filipino workers (OFW) and relatives of distressed OFWs in a press conference on Thursday, March 5 at Chino Roces Bridge (former Mendiola Bridge).

Led by the group Migrante, they joined the call for Aquino’s resignation as, they said, thousands of OFWs have been stranded, maltreated, dying or have ended up dead and neglected by the Aquino government.

Sol Pillas, secretary general of Migrante International said that for OFWs and their families, Aquino’s role and Malacañang’s consequent efforts to cover-up his accountability in the Mamasapano tragedy is the last straw.

“This is proof that Aquino can use his own state forces as bait to danger, and he has done the same thing to the OFWs and the people. The OFWs and families that are here with us now represent the sorry plight of our OFWs. Like the victims of the Mamasapano clash, they too, cannot expect justice from our government,” she said.

Pillas said that since Aquino took office, OFWs and their families have borne witness to his government’s criminal neglect and incompetence, especially when dealing with OFWs in distress.

Rodolfo Malinao, the husband of Rochelle Masubay, an overseas Filipino worker who died under mysterious circumstances, was emotional in calling for justice for his wife. He said he cannot accept that his wife had killed herself.

His wife Rochelle allegedly stabbed herself in the chest. “She went abroad for the future of our two children and to help her parents who are survivors of typhoon Yolanda. How could she ever think of killing herself within two months of her stay abroad,” said Malinao in the press conference.

Wives of stranded OFWs in Saudi Arabia said at the press conference that they went to different government agencies to get their husbands home but to no avail.

“Since November, we have been going to different agencies seeking help for our husbands’ repatriation, but the government has not acted on our plea,” said Marie Fe Batongbacal. She added that their children have been skipping school because they have no money for snacks and transportation. It has also become a struggle to put food on their table three times every day.

Marina Sarno, an OFW who came from the United Arab Emirates, became emotional upon recalling her experience with an abusive employer. She said when she was sick, her employer tried to poison her. “My employer pretended to give me medicine to drink. I did not drink it because it was dissolved in water. I dipped a small piece of bread in the liquid and gave it to a cat, and it died.”

She said she and another domestic helper in the house worked from 5 a.m. to 2 a.m., doing laundry, cleaning the house, washing the car, cooking and taking care of children. She acquired tuberculosis because of the heavy work, and suffered in the hands of her employer for nine months. She managed to go back to the Philippines on June 16, 2014 through the help of Migrante.

All of them said it is poverty that pushes OFWs to work abroad. Sarno, for one, was a midwife, who went to Saudi Arabia to work as a domestic helper in 2009, because she only earns P5,000 ($113) as a midwife here at home.

Malinao said the Philippine government benefits from the money remitted by OFWs but they are not treated humanely. Worse, he said, they are suffering from the loss of their loved ones.

“Up to now our children are still asking about their mother. I could not tell them that she died, they might get stressed or think a lot and become sick,” the teary-eyed Malinao said in an interview with Bulatlat.com. His children are aged four and three. He said his wife’s parents told him to fight for justice for their daughter.

Sarno said she is still suffering from trauma. As of now, she does not have plans to work abroad again. “If I work abroad again, it could be the last. Who knows? I might come home dead,” she told Bulatlat.com.

Pillas said they have wanted Aquino out since he first jeopardized the lives and welfare of OFWs in Hong Kong, after the Manila hostage-taking tragedy, where Hongkong tourists were killed in a bungled rescue attempt by police in Luneta in 2010. Angered, many Chinese citizens turned their ire on OFWs working in Hong Kong.

“The OFWs have experienced unforgivable government neglect, the biggest budget cuts for services, more exorbitant state exactions and fee impositions,” Pillas said. Added to this is “an ever-worsening domestic crisis that has aggravated forced migration.”

“These are even compounded with Aquino’s involvement in the pork barrel scam and Disbursement Acceleration Program, and his failure in leadership during the typhoon Yolanda tragedy,” Pillas said. “We have no qualms now in lending our voices to the growing clamor for Aquino to resign.”