MANILA – Both the timing and the amount are questionable.

Rea Alegre, spokesperson of broad workers’ group All Workers’ Unity (AWU), described the P15 ($0.34) wage hike approved by the Regional Tripartite Wages and Productivity Board last Tuesday, which will take effect mid-April for Metro Manila workers, as too sparse that it is insulting; the timing too is suspect.

“This is as insulting as the previously announced P238 to P268 ($5.32 to $5.99) wage rate increase in Caraga Region, which also allows companies and industries to give workers coupons instead of an actual wage increase. Workers need immediate relief and a National Minimum Wage, in the amount of P16,000 ($357.60) monthly, not alms.” 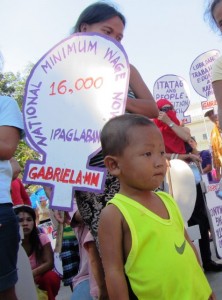 Alegre also questioned the intention of the government in approving the increase, coming after the plunge in President Benigno Simeon Aquino III’s popularity ratings. “The increase may have been intended to appease Filipino workers who are disgruntled, but the meager amount is enraging us even more,” Alegre said.

Elmer “Bong” Labog, chairman of Kilusang Mayo Uno (KMU), said in another statement that the wage hike is “too meager compared with the amount needed daily by a workers’ family to live decently.”

Like his counterpart in the alliance AWU, Labog dismissed the seeming placatory gesture of Malacañang.

“If Aquino thinks this wage hike will weaken workers’ protests calling for his resignation, then he is sorely mistaken. This meager wage hike is insulting to workers and does not address the government’s and big capitalists’ attacks against the minimum wage,” said Labog.

According to independent think-tank Ibon Foundation, the Family Living Wage in the country, or the amount needed daily by an average Filipino family to live decently, stood at P1,086 ($24.27) last August 2014.

KMU, together with workers’ formations from both the private and public sectors under the umbrella of broad campaign network All Workers’ Unity, is calling for the implementation of a National Minimum Wage in the amount of P16,000 ($357.60). The amount, they said, is only half of the Family Living Wage computed monthly.

AWU and KMU and other formations have in the past scored the regionalization of wage-setting in the country, saying the move only becomes a “modus operandi” for the government and the employers to press down wages nationwide.

Twenty-five years after the Wage Rationalization Law and the Salary Standardization Law were first implemented in the Philippines, the DOLE (Department of Labor and Employment) said the country has more than 1,000 wage levels by now.

That much number of minimum wages mean there is really no minimum wage in effect , as far as the progressive groups from KMU to AWU are concerned.

Under Aquino, the minimum wages are even subject to practical abolition despite the absence of a corresponding law as the labor department began implementing the two-tier wage policy, which seeks to replace the mandatory minimum wage with something called “floor wages,” an amount frequently lower than the already derided as meager minimum wages.

“The P15.00 ($0.34) increase in workers’ daily wage is not even enough to cover for the increase in fares in the country’s train systems. It’s not enough to cover for the rising prices of basic commodities, especially food items, and rising payments for basic services,” Labog said. Even the government-formed Trade Union Congress of the Philippines said as much in another statement.

Of the big labor groups in the Philippines, only TUCP seemed to have remained vocal in its belief of the Aquino government’s claimed economic growth, and it still continues to file wage hike petitions with the regional wage boards when the progressive groups are already calling for its abolition and pushing instead for a nationwide minimum wage.

But even TUCP finds the P15 wage hike “revolting.” Its spokesman, Alan Tanjusay, also warned that amid the widening gap between the rich and poor in this country, social injustice “either prods our productive young workers to join the ranks of our Filipino brothers and sisters in the mountains to wage the battle against Philippine social inequality from there, or forces them to decide to swallow the bitter pill by working abroad at the expense of a morally, psychologically and emotionally-deprived children.”

The TUCP statement demanded that the government “explain” its basis for the P15 wage hike to the workers immediately.

The progressive groups, meanwhile, are preparing for bigger protests in the build-up to Labor Day and on Labor Day itself. Labog of KMU said they will call for Aquino’s resignation, the implementation of a National Minimum Wage in the amount of P16,000 monthly, and the banning of contractual employment.