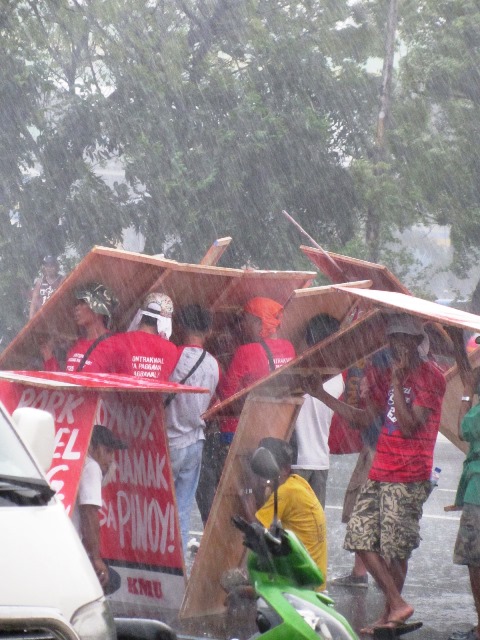 The disparity between the rich and the poor has only widened as wages were kept depressed and dragged further down by the two-tier wage system, which the Aquino administration introduced early into its term.

MANILA – In most of his speeches, President Aquino has consistently reported rosy, economic growth under his administration. But always, workers’ groups would contradict his claims, citing their daily harsh realities.

In the runup to Aquino’s final State of the Nation Address, the labor center Kilusang Mayo Uno highlighted the contrast in his report and reality by pointing to the “virtual garrison” along Commonwealth Avenue, calling it “the expression of distance between the president and the people, and between the picture that he will paint and the reality on the ground.”

The “virtual garrison” includes not just the concertina wires, container vans, concrete barriers, and thousands of police backed up by military elements. For the labor center, it is the extension of the harassment of unionists and activists, the “illegal arrest” of peace consultants of the National Democratic Front of the Philippines, militarization in the countryside, and other human-rights violations. “It means Aquino cannot hide the real sorry state of the nation,” said Jerome Adonis, KMU campaign officer.


In a study of President Aquino’s five-year “legacy” in labor and employment discussed last week at a forum in Quezon City, the non-government organization Center for Trade Union and Human Rights (CTUHR) also reported the contrast in Aquino’s rosy reports and the poverty and repression happening on the ground. Their documentation of violations of trade union and human rights is subtitled as “Deception, Poverty and Repression.”

From various fora and rallies held by progressive workers’ groups last week, the following are some of the most often condemned “crimes” of the administration of Pres. Benigno Aquino III against the workers

Various groups complain that Aquino’s vaunted economic growth is actually “jobless growth.” This is confirmed by how, every year from 2009 to 2014, overseas deployment surpassed local job generation, the CTUHR said in its forum.

Even those holding a job are hardly better off. Almost seven in every 10 (65 percent) of employed Filipinos are in precarious jobs under the Aquino administration, the CTUHR said. The group based it on latest available government employment and unemployment data.

CUTHR said most of the 1.1 million newly added jobs under Aquino were part time jobs, and only less than a quarter of a million were full-time jobs. Daisy Arago, CTUHR executive director, said the economy and labor market itself rely on industries known for “flexible and precarious” jobs. These industries include construction, tourism and BPOs.

On wages and livelihood

The non-government research think tank Ibon Foundation reported that the richest Filipinos grew their wealth 300 percent under Aquino, but the workers’ wages consistently trailed behind profit growth, prices and the family living wage.

The CTUHR said the disparity between the rich and the poor has only widened as wages were kept depressed and dragged further down by the two-tier wage system, which the Aquino administration introduced early into its term. It replaces “minimum wage” with a “floor wage” that is pegged to the poverty threshold of 1.25 USD a day. The minimum wage is pegged on the living wage.

Among public sector employees, the demanded P16,000 hike in minimum wage aired last year was denied. Instead, the Aquino administration continued the Arroyo administration’s Salary Standardization Law. The SSL4 was started but government employees confederation COURAGE said its schedule of increases benefits more those in higher positions and gives only crumbs to the more numerous ordinary government employees. Also, the wage hikes are to be given in tranches, and in SSL 4, it in in four tranches, which means the lowest salary grade of P9,000 ($197.61), will grow to P16,000 ($351) only four years from now.

CTUHR reported that these wages are further reduced by the increasing cost of services of public utilities such as the MRT and LRT, water and electricity, and education.

On top of this, labor groups said, the minimum wage is actually not being implemented fully. CTUHR said that based on government data, almost half of the employed (46 percent) are earning lower than the minimum wage.

On job security and union rights


The KMU cited as “the face of contractualization” the almost 80 Kentex workers in Valenzuela City who died in the factory fire last May. The labor center blames the Aquino government policy for contractualization, as outlined in the Department of Labor and Employment’s DO 18-A, which workers want the government to scrap.

Ibon Foundation said that among wage and salary workers, it is estimated that around 10 million or over four out of ten (44 percent) are in non-regular and correspondingly low-paying, no-benefit, and insecure jobs.

Workers said the number of contractuals is higher, as the case of the striking workers of Tanduay Distillers Inc where 90 percent of the workforce are contractuals.

KMU criticized how the Aquino administration makes it like a policy to bust newly-formed unions and repress labor activists and advocates.

Citing data culled from the documentation of CTUHR, it enumerated the numbers of workers and organizations the Aquino administration has “attacked:”

In separate fora and rallies held by workers groups in the capital to dispute their expected SONA “lies,” they uniformly disparaged Aquino’s most popular taglines.

At the joint fourm of FFW and KMU at the National Press Club last Friday, Jul 24, they agreed that this is probably the only “true” claim Aquino made, “because his administration used no wangwang in formulating and implementing anti-people and anti-worker policies, said Julius Cainglet, spokesperson of FFW.

Workers group said it is paved by sharp razor wires, steel barriers, police, military and “goons,” and it leads not to prosperity where the Filipinos can dream again, but to “collapsed mines and factory firetrap,” heavy traffic not helped by deteriorating MRT and LRT services, hiked fares and hiked budget by the Department of Transportation and Communication, “with nothing to show for it.”

Kayo ang boss ko (the people are my bosses)

Nita Gonzaga, KMU vice president for women, said this Aquino PR has been thoroughly belied by his economic policies which ignored the plight and voice of the working majority among Filipinos. “Our condition is such that most of us are forcibly transformed into contractuals, being slowly or rapidly killed in the workplace, being repressed and hindered from forming unions and organizing ourselves,” Gonzaga said.

Tens of thousands of angry contractual and regular workers, together with more from different groups, said they will “belie every fib Aquino is to propagate by holding their true State of the Nation” somewhere in Commonwealth Avenue, or as near as they can get to the Batasan complex.