Activists are fighting back against harassment from state forces, by using a remedy from the Supreme Court.

MANILA – Ten progressive activists from health, labor, migrant workers and youth groups filed a petition for a writ of amparo before the Supreme Court, seeking protection from the harassments, threats and surveillance perpetrated against them by suspected military agents.

In their petition filed on Sept. 3, activists asked the court to issue a Temporary Protection Order (TPO) not just for them, but also their families. They also asked the Supreme Court to issue a writ of habeas data, which would compel the respondents to divulge, and destroy all information they gathered which may be used against the respondents.

The petitioners are leaders and organizers of members and affiliate organizations of the Bagong Alyansang Makabayan (Bayan), namely, the Health Alliance for Democracy (HEAD), Kilusang Mayo Uno (KMU), National Union of Students of the Philippines (NUSP), and Migrante International.

For the past months, progressives have assailed the harassment, threats, and surveillance, which intensified this year. In their petition, activists said respondents and their agents violated their rights to life, liberty and security.

The Writ of Amparo is a legal remedy for the protection of victims of human rights violations, including threats. This goes hand-in-hand with the writ of habeas data that may be sought for a person to release and even destroy personal information being held that threatens one’s life and security and violates the right to privacy.

“In the instant case, the pattern is clear: Petitioners are harassed not for their individual actions, but for being members of militant organizations which are known to be vocal critics of the Aquino administration,” the petition read.

Petitioners observed a “pattern,” in which suspected state agents make threats through text messages, brand them as members of the underground movement and then urge them to “cooperate” with the military in “ambiguous” ways. 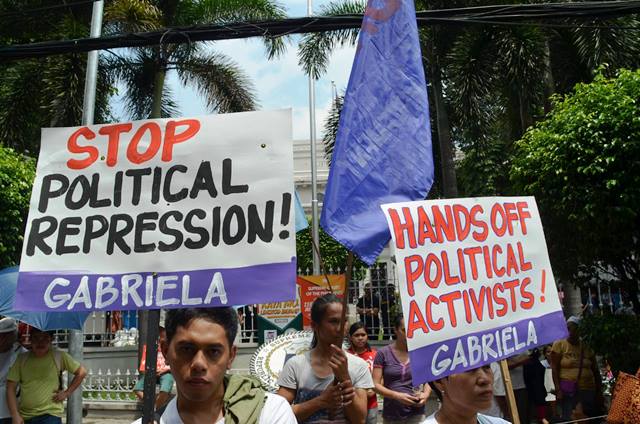 The progressives detailed the harassments by men suspected to be state security forces. In these harassments, even medical practitioners who are members of the Health Alliance for Democracy (HEAD) were not spared. Last June, Dr. Darby Santiago, HEAD chairperson, received threats via text message. One read, “Isang bala ka lang. Ingat ka doc.”

Other text messages called Santiago “a doctor of the Communist Party of the Philippines and the New People’s Army in Northern Luzon.”

Imelda Gerali, of the Samahang Operasyong Sagip Inc. and also a member of HEAD, reported being hounded by suspected intelligence officers, who would wait for her at their office gate, and throw dagger looks at her.

Harassment of activists at homes, offices and public vehicles

The petitioners listed incidents of harassment at their offices and homes, and even in public vehicles. Suspected state agents would approach the activists in the guise of “offering help,” in exchange for quitting their work in their organization. The offer also came with a threat if they carry on with their activism.

Rebecca Abelong, a member of the Kilusang Mayo Uno national council, was approached by men who introduced themselves as members of “Guardian,” and asked information about her in their village office. The incident happened right after she attended a protest in front of the Chinese Embassy on July 7.

Another labor rights activist, Neil Ambion, KMU media liason, said two men who identified themselves as members of the National Bureau of Investigation blocked his way as he was going up the stairs to a train station. The two men attempted to force him to come with them to talk about his “security,” but eventually left when fellow passengers started to take notice.

Another KMU member Renato Asa, the labor group’s Public Information Department secretary, noticed a man sitting outside his house. Wary of the harassments against fellow activists, he asked the man if he is a soldier. The man admitted he is a soldier and offered “help” to Asa. He handed him a piece of paper with a cellphone number.

Two men who also introduced themselves as soldiers harassed Loreto Victoriano, an education and research staff of KMU.

It was also a soldier who harassed Josephine Carlos Betana, a member of Migrante International in Bagong Silang, Caloocan in September 2014. The man also offered “help” to Betana.

In April, Garte experienced harassment from a man sporting a military hair cut while riding a jeepney.

It was a more elaborate case for youth activist Lovely Carbon, National Union of Students of the Philippines secretary general, who received messages from a certain Nelson Velasco who offered to give her a “part-time job” for Global Research and Management Center (GMRC). When they met at a fastfood chain in Quezon City, she was tasked to write reports on “current relevant issues” for a publication.

One of her first assignment was to write a report on President Aquino’s State of the Nation Address (SONA). But when she submitted her report, she was asked to write more on the “planning part” and the “preparation” being made by protesters for the SONA. She was also tasked to write a report on the plans of the International League of Peoples’ Struggles (ILPS) on the upcoming APEC summit in the country.

Later, Carbon learned through a fellow youth activist that Velasco and GMRC were involved in gathering information from student activists at the Polytechnic University of the Philippines.

Jessica Ferrera, the current student regent in PUP, also experienced harassment when her father was told by a man that he would help to have him hospitalized “if your daughter would help us.”

Petitioners said the pattern in these cases show that “their lives, security and liberty are under threat,” and that these were carried out under the government’s counterinsurgency plan, Oplan Bayanihan.