“These beacons of hope for the indigenous communities are now being shadowed over by the continuing threat of militarization and development aggression.”

MANILA — Marissa Ejanel, 27, a Manobo from White Culaman village, Kitaotao, Bukidnon, can speak Tagalog fluently, and although her vocabulary sometimes runs short, she can articulate her thoughts on allegations against the Lumad and their schools in Mindanao.

“It is not true that we are members of the New People’s Army (NPA). We unite and formed our organization because of poverty. It is also because of poverty that we built a school for our children,” she said during the fourth series of Ulat Bulilit entitled “Lumad Schools: Sowing Seeds of Hope” on Oct. 21 at University of the Philippines-Diliman.

Being confident and proud of their origins and efforts to protect their ancestral land are the most important things that their school — the Fr. Fausto Tentorio Memorial School (FFTMS) – taught them and their children. That is why she is enraged over accusations against them and their school.

“Before the school was established, we really undervalued ourselves and our capacities because we did not have education. But with the school and the teachers, it all changed,” she said in an interview with Bulatlat.com.

In the forum, various child rights groups and advocates pledged to continue promoting and protecting the right of children to education.

“Education symbolizes hope for out impoverished Lumad brothers and sisters. Let us help them sow the seeds of hope so that tomorrow, no children of indigenous communities will be left uneducated,” said Salinlahi Alliance for Children’s Concern secretary general Kharlo Manano.

Mercedes Arleen Perez, executive director of Center for Lumad Advocacy and Services (Clans), said long time ago, schools in the hinterlands were non-existent because DepEd could not reach the far-flung villages in Mindanao. There is a high rate of illiteracy among the Lumad which made them vulnerable to oppression, exploitation and discrimination, she said.

Perez related how Lumad leaders wondered why their debts kept on mounting whenever they brought their products to the lowland. Little did they know, they were being exploited because they could not count, she said.

Perez said now that children of the Lumad are literate, they the ones who do the computation. “They cannot be deceived anymore. This is how education can help them,” said Perez.

She said the Lumad, as a community, saw the need for education. But since they are illiterate, they had difficulty and so they organized themselves and approached different organizations including the local government and other non-government organization such as Clans and the Mindanao Interfaith Services Foundation, Inc. ( Misfi).

With the help of these organizations, schools were built and grew in numbers.

Manano said around 146 Lumad community schools have been providing free education for indigenous children including the schools of Salugpingan Ta ‘Tanu Igkanugon Community Learning Center (STTICLC) and Misfi in the provinces of Southern Mindanao Region.

There is the Alternative Learning Center for Agriculture and Livelihood Development (Alcadev) and Tribal Filipino Program in Surigao Sur (TRIFPSS) in Caraga region and Blaan Literacy School and Learning Center in SOCKSARGEN. 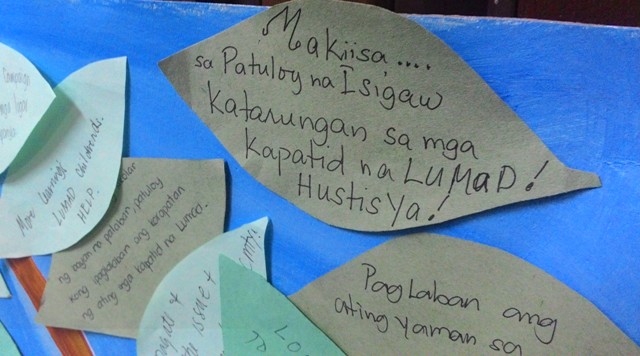 The schools also developed and evolved, said Perez. She said most of the schools started with literacy and numeracy programs or non-formal education. Through the years, the schools that were established offered pre-school, grade school and high school.

Perez said subjects of these alternative schools are almost similar to mainstream schools except that they have agriculture as a major subject. Part of their history subject also tackles the history of their tribe and their resistance against oppression. This way, she said, students become proud of their tribe.

Their curriculum is also appropriate to their tribe. For example, Perez said, letter A’s example is not apple, to make it appropriate to the Lumad, they take examples from things in their surroundings. They also teach in their mother tongue even before the government implemented such under the K to 12 program.

Manano added, “These schools bring education to the very heart of Lumad communities, helping Lumad to contribute to their empowerment. Most importantly, the schools promote academic and practical studies on sustainable agriculture to uplift the living condition of the communities and how to preserve their resource-rich land, the indigenous culture and traditions of Lumad.”

Ejanel said it was severe poverty that pushed them to unite, organize themselves and form their organization, Nagkahiusang Mag-uuma ng Barangay White Culaman (Namabaw), the municipal organization of farmers in their area. They sought the help of the non-government organization Mindanao Interfaith Services Foundation Inc. (Misfi) to build their school. The FFTMS was established a year ago, catering to grade 7 and 8 students, with free board and lodging.

The FFTMS was ordered shut down by White Culaman village chief Felipe Cabugnason despite orders from Kitaotao Mayor Lorenzo Gawilan and by the Department of Education Region X not close down the school.

Ejanel said they are not only saddened but also enraged that their school is being targeted by the government. She said their lives were so devastated with the deployment of soldiers in their area. “They are fascist. They nab and kill our fellow Lumad because we are being accused of being members of the NPA. That is not true.”

“We are wondering why they keep on accusing us of being members of the NPA. ‘Pag nagkakaisa ba yung mga tao, yung mga Lumad para ipagtanggol yung kalikasan, yung aming pamumuhay, NPA na ba ‘yun?” (When the Lumad unite to defend nature, their livelihood, is that already being an NPA?) she asked.

She added, “Of course we will unite because we are fighting for our right to live and right in our ancestral land. We do not want our land to be destroyed (by mining and logging companies).”

According to Leaneza Dura, teacher of FFTMS, Misfi’s literacy and numeracy program for the Lumad started in 2007. As years passed, Misfi established formal schools. Now, there are 15 elementary schools and four high schools in Region s 10, 11, 12 and 16 that were established by Misfi. All were requested by the Lumad people in the said areas.

She said every year; they submit papers to six different divisions of Department of Education (DepEd) for their permit to operate. She said ever since they started the school, they have been constantly communicating with the DepEd.

“Six of our schools have permits to operate while others are in the process. The DepEd has even recognized our mother school in San Fernando, Bukidnon and another school,” she told Bulatlat.com in an interview.

She said the school’s curriculum is patterned after the government’s K to 12 curriculum but with focus on sustainable agriculture, the Lumad’s culture and their way of life. They also have Math, Science, Filipino and Makabayan subjects.

Dura said every time DepEd visits their school, they check the teachers’ credentials, their curriculum, references, and school programs. “They check everything. That is why it is quite impossible for this school to be run by NPAs because the government, through the DepEd, knows about our existence from the beginning,” she said.

To Ejanel and the rest of the Lumad, it is clear that they are being attacked by state forces because where they live is rich in resources. Not only because of the NPA’s presence.

Save our Schools Network spokesperson Reina Requioma expressed alarm over Lumad community schools becoming persistent targets of attacks and red-tagging by the military.

“Threatened by the unity and strong resistance of indigenous communities, the government, through the state forces who serve as investment defense forces and private goons of companies in Mindanao, continues to vilify and attack these schools,” said Requioma.

According to SOS data, 40,000 Lumad were forcibly displaced from their communities, 58 Lumad killed, 233 children were victims of rights violations and 87 schools have reported cases of military attacks.

Perez said schools are not caught in the cross fire and attacks on schools are not because of a tribal war. “They are the ones who are being targeted. The government is driving them away from their land to make way for big Filipino businesses and multinational companies to plunder the resources of Mindanao.”

Meanwhile, Ejanel lamented, “Before, the Lumad do not know how to write and read. That is the reason why we persevere to have a school because we do not want anyone to step on us because we are illiterate.”

“That is why we want our next generation, our children, to finish their studies and work because our tribe also wants to uplift our lives,” Ejanel said.

The SOS urged the public to help save the schools for the Lumad children.

“These beacons of hope for the indigenous communities are now being shadowed over by the continuing threat of militarization and development aggression. We cannot underscore the impact of these violations to the rights of children to life and education. We need to save the Lumad community schools from these attacks,” Requioma said.