Eduardo Serrano spent the best years of his life serving the peasantry. A graduate of University of the Philippines – Los Baños, he could have chosen a life of luxury by working in multinational corporations engaged in Agro-Industry, but he did not. He chose to serve the poorest sectors in Philippine society.

No matter what the military and the government say about him; no matter if one believes or not in the principles he has consistently fought for. One thing is clear: he had lived an honorable, principled and selfless life. He does not deserve to die while in detention.

To honor the man and his principles and to rage against the injustices that he has been a victim of, Bulatlat.com is reposting the articles we published about Eduardo Serrano. 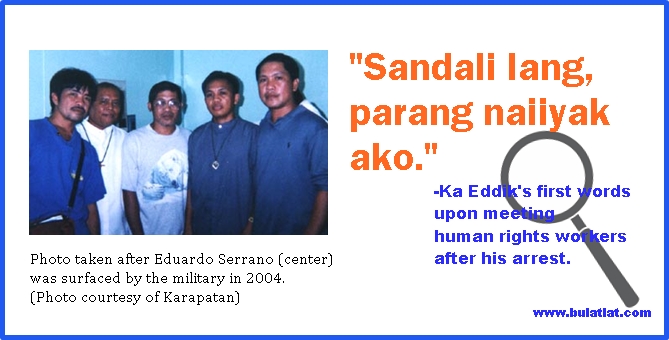 “Sandali lang, parang naiiyak ako” (Just a second, I feel like crying). Those were the first words human rights workers heard from Eduardo Serrano, alleged NPA leader from the Southern Tagalog region, nine days after he was held incommunicado by his military captors. After days of searching for him at various jails in Manila and Southern Tagalog, they finally tracked him at the Calapan City Jail in the island of Mindoro.

He was as upbeat as a teenager when his childhood friend, George, showed up at the Philippine National Police (PNP) Custodial Center in Camp Crame. Wearing black shorts, leather sandals and his customary orange shirt with the words “Free All Political Prisoners,” Eduardo Serrano jumped up and down and hugged his friend whom he had not seen since 1995.

After a few minutes of the usual kumustahan (greetings), Serrano started to update his friend on what had led him behind bars, from his arrest on May 2, 2004 at the Batangas pier after coming from a consultation with Fidel Agcaoili, member of the National Democratic Front of the Philippines (NDFP) Peace Negotiating Panel and co-chairperson of the Joint Monitoring Committee (JMC) for the Comprehensive Agreement on Respect for Human Rights & International Humanitarian Law (CARHRIHL) who was visiting the country then. Serrano is a consultant of the NDFP from the province of Mindoro Oriental, an island south of Manila.

NDFP consultant has spent a decade in prison

For ten years, Eduardo Serrano has been languishing in jail for crimes he did not commit.

Serrano, a consultant of the National Democratic Front of the Philippines (NDFP) in Southern Tagalog, was arrested on May 2, 2004 at the Batangas pier.

Serrano has been slapped with five charges: three charges of multiple murder, one kidnapping and one attempted homicide. Of the five, only one has been dismissed and the four others are still in court. He spent three years at the Calapan City Jail in Mindoro Oriental before he was transferred to the Philippine National Police Custodial Center at Camp Crame in Quezon City.

“The military presented several witnesses; all of them claimed that I am a high-ranking leader of the communist movement. But the charges filed against me are common crimes, not rebellion,” Serrano said. 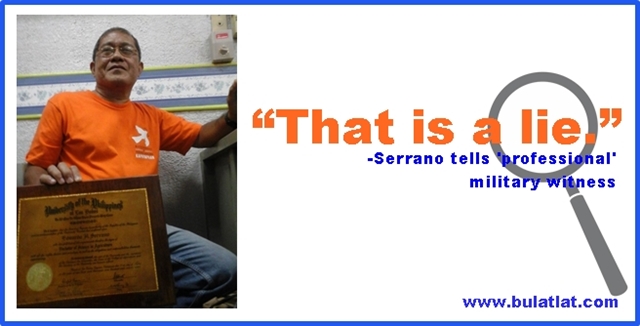 A peace consultant of the National Democratic Front of the Philippines (NDFP) denied allegations that he is a ranking official of the underground movement – an allegation made four years ago by a “professional military witness.”

“That is a lie,” peace consultant Eduardo Serrano said during his cross-examination at the hearing of the multiple murder and frustrated murder charges against him at the Quezon City Regional Trial Court Branch 100 last June 25.

Serrano is the longest detained NDFP consultant who has been languishing in jail since 2004.

After 11 years in detention, a Quezon City court ordered the immediate release of Eduardo Serrano, a peace consultant of the National Democratic Front of the Philippines (NDFP), calling his incarceration “an outright mockery” of the Constitution.

In a court order issued today, Oct. 22, Judge Marilou Runes-Tamang of Quezon City Regional Trial Court Branch 98, ruled that political prisoner Serrano is not the accused Rogelio Villanueva, whom the military claims is a ranking official of the Communist Party of the Philippines.

The country’s longest detained political prisoner is calling on all fair-minded judges and rights advocates to continue working and fighting for the respect of human rights and freedom for many political prisoners following the dismissal of another trumped-up case against him.

On Nov. 26, the Quezon City Regional Trial Court Branch 100 acquitted National Democratic Front of the Philippines peace consultant Eduardo Serrano of multiple murder and frustrated murder charges for the prosecution’s failure to prove his guilt beyond reasonable doubt. This is the second case against him that was dismissed.

In a statement sent to Bulatlat.com, Serrano said he is very much relieved of the developments.

“In my case, I have already suffered 11 years of unjust and cruel detention as a political prisoner, and still continue to suffer such, given the efforts of the reactionary state forces to suppress progressive advocates of and fighters for the cause of the poor and oppressed and the mass of the people in our country,” Serrano said.

National Democratic Front of the Philippines (NDFP) peace consultant Eduardo Serrano passed away in a hospital this morning, as calls for his release on humanitarian grounds remain unheeded by government. He was 62.

In a Facebook post, Dr. Geneve Rivera-Reyes of the Health Alliance for Democracy, said Serrano passed away at 8:10 a.m.

Since Dec. 16, Serrano had been confined at Philippine Heart Center where he was rushed after suffering a heart attack.

For activists and many progressive, it is not cardiac arrest that killed National Democratic Front of the Philippines (NDFP) peace consultant Eduardo Serrano, but the Aquino administration that refused to release him.

“It is not heart attack that killed Ka Eddik, but the ruling few, who, in their despair and insanity, denied him his freedom, believing that this would put an end to the struggle of the people,” Doris Cuario of Karapatan-Southern Tagalog said.

Serrano, or Eddik to his family and friends, was an agriculture graduate of the University of the Philippines-Los Baños. He received a post-graduate study on animal science in Copenhagen from 1978 to 1979. When he returned to the country, he helped found the Southern Tagalog-based peasant group Katipunan ng Samahang Magbubukid sa Timog Katagalugan (Kasama-TK), and offered consultancy on farming and irrigation for people’s organizations and private individuals.

President Benigno Aquino III, the son of so-called icons of democracy, criminalizes the exercise of civil and political rights.

Since Aquino assumed the presidency, 304 activists were arrested and detained, bringing the number of political prisoners to 561.