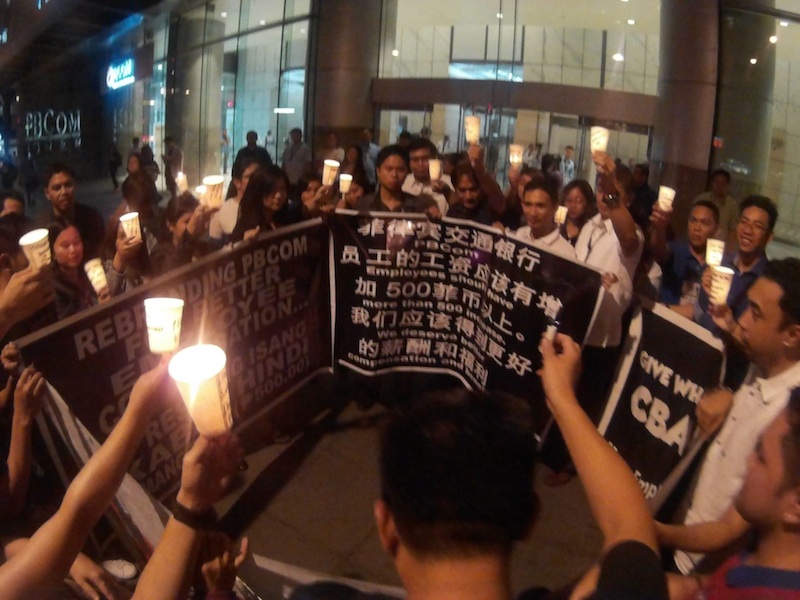 “This is our continued protest against the near moratorium increases that management is offering its employees for the next two years’ CBA.”

MANILA — PBCom employees might gear up for a strike if negotiations for their collective bargaining agreement (CBA) continues to be stalled at what the unionists describe as “near moratorium” management counter-proposal.

The 400-strong union’s three-year CBA lapsed December last year. Talks for its fourth to fifth year are bogged down five months into the union-management negotiations, prompting a series of protests from unionists in various branches all over the country.

Last week, a hundred unionists lit candles outside of PBCom Tower Building along Ayala Avenue, Makati City to protest the management’s proposal for “meager wage hikes.” This week, as top executives of the bank were holding a meeting, about 30 bank employees picketed the bank premises in Ayala before starting work for the day.

Employees from smaller branches outside of the capital were reportedly also coming together for brief pickets.

“This is our continued protest against the near moratorium increases that management is offering its employees for the next two years’ CBA,” said Dennis Fernandez, vice-president of PBCom Employees Association (PBCEA).

Yet, in comparison to the union’s demand for 12-percent hike in wages, the PBCom management offered a P500 ($10.71) monthly wage hike.

Union leaders explained that in previous CBAs, they and the management have opted for percentage increases to recognize the varied seniority levels of the employees.

But for the first time in their years of crafting CBAs, the management offered and hardly budged from its first hike offer of P500. Union leaders said that after tax, that hike will hardly amount to P17 ($0.02) per day, an amount which is not even enough to pay for their transportation fare going to and from their jobs.

Fernandez told Bulatlat that the offered wage hike is even more unacceptable given that the bank employees’ workload has been intensified by the Lucio Co-owned bank’s restructuring and reorganization.

It can be recalled that the bank employees’ union launched a series of protests last year against the management’s forcible retrenchment of employees especially those who had served the longest in the bank. These are the employees whose salaries were relatively higher due to their CBAs over the years. The workload of those retrenched was reportedly being borne by those left on the job. When employees eventually leave because they could not bear the heavier workload, they are not being replaced by new employees. Instead, the bank employees are being driven to multi-task, under the bank’s reorganization, the union said.

“With PBCom’s rebranding, employees should also be better off. But we don’t see that in offers of Management”, added Fernandez.

Fernandez said that based on the union’s study, PBCOM can afford the employees’ demanded wage hike. “How can you produce more than P213 million profit without the help of rank and file employees?” he said.

PBCom is considered one of the biggest commercial banks in the Philippines, with P68 billion worth of total assets as of 2014. It has 80 branches across the country. Recently, it acquired Banco Dipolog to boost its presence in Mindanao.

In 2014, business tycoon Lucio Co entered PBCom as strategic investor. He is ranked ninth in Forbes List of billionaires in the Philippines as of 2015. With his wife Susan, Lucio Co has up to $1.53 billion.

The Banking and Financial Unions against BSP Circular 268 (BFU268), a group of 21 bank unions opposed to outsourcing in the sector supported the protest of PBCom employees. In a statement, it said PBCom is bargaining in bad faith because despite the fact that negotiations have dragged for five months now, the bank has stuck to its meager offer of wage hike.

“With the income of PBCom, it could easily address the employees’ demands. This should be appropriately shared among its employees, the PBCEA members, who have dedicated themselves and worked for that profit”, said Mark Oliver Gonzales of the Banking and Financial Unions against BSP Circular 268 (BFU268).

Philippine Bank of Communications Employees Association is a member of BFU268.