“Duterte’s economic policies is creating a ‘debt bomb’ that will explode in the near future.

MANILA — Halfway into his term, President Rodrigo Duterte’s massive infrastructure program may create “photogenic” and “tangible developments.” However, looking into the government’s own data reveals a slowing economy, a progressive think tank said.

Ibon Foundation Executive Director Jose Enrique Africa told the media in a press briefing July 11 that the country’s economy is actually on a downward trajectory despite the billions of public funds being poured for Duterte’s “Build Build Build” program — the biggest since the 1970s.

This, he said, is reflected in the government’s own data, which Ibon Foundation cited, analyzed and scrutinized from the people’s perspective.

As such, billions of public funds poured to carry out the massive infrastructure spending, Africa said, was still not enough to push the much-needed economic growth and may leave the country debt-bound, with future administrations paying for it.

“The government is spending beyond its means,” he quipped.

Duterte’s economic managers have tried to explain the downward trajectory of the economic growth, blaming the budget impasse during the election campaign.

At the onset of 2016, Africa added, the country has also been experiencing low interest rates, low remittances from overseas Filipino workers, and the decline in the outsourcing industry, resulting in absence of a stimuli that can keep its economy afloat.

“This is why they are holding on to infrastructure building,” Africa said, adding that it will only provide “illusory growth.”

Duterte’s economic policies, he said, is creating a “debt bomb” that will explode in the near future.

Africa said the government is clearly spending beyond its means. The recent improvement in the country’s credit rating should not be a cause of celebration as it does not in any way reflect the country’s development or the conditions that workers are being subjected to.

Early this year, lopsided deals with China surfaced, which Africa described as “overly biased” towards China.

Ibon Foundation said the government’s total outstanding debt is now at P7.9 trillion as of May 2019 as it increased by P2 trillion under the present administration.

Meanwhile, the foundations of the country’s economy, referring to agriculture and manufacturing industries, are being left to die.

Africa noted that instead of increasing the budget of the Department of Agriculture, it was slashed by P3.4 million in the budget allocation next fiscal year. 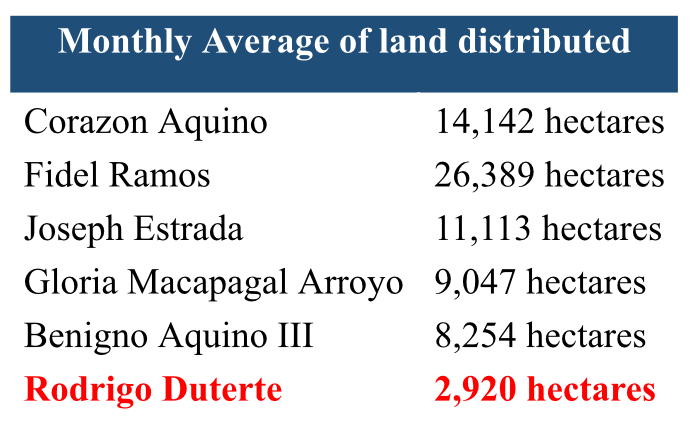 As such, Ibon pointed out that the agriculture industry has been “left to perform chronically poor” and grew by a mere 0.8 percent last year and in the first quarter of 2019.

The Duterte administration also proves to be the “poorest distributor of land” under the already flawed agrarian reform program, with only an average of 2,920 hectares monthly, a far cry from his predecessors.

The manufacturing, on the other hand, has not improved even for a bit. The progressive think tank said the industry has been slowing down since 2012 with only about 4.0 percent growth in 2018.

Meanwhile, majority of the flagship programs under Duterte’s Build Build Build are transportation related, prompting Africa to react: “When has mobility developed an economy?”

On the ground, the country’s slowing economy may be seen in the government’s poor annual job generation – only 81,000 in 2017 to 2018, which is the lowest in all of the past nine administrations spanning about six decades, according to Ibon Foundation.

Africa pointed out that the Duterte administration is actually the stingiest when it comes to wage hikes – with the nominal wage to have only increased by nine percent, also the lowest under all post-Marcos administrations.

Should the Duterte administration hail its unemployment rate in his State of the Nation Address, Africa reminded the public that it remains as “super fake.”

Ibon said that by using its original definition, the real unemployment rate in 2018 is 10.1 percent or about 4.6 million people when the so-called “official released figures” stated 5.3 percent or 2.3 million. Official figures have been redefined in 2005 to exclude so-called “discouraged workers,” or those supposedly not seeking job for the past six months.

Regressive taxes for the poor while the rich gets richer

With the country’s economic growth plummeting, there are still business tycoons such as former Senator Manny Villar who are getting richer – snatching the top post of Forbes 500 richest, a big leap from his 12th post before 2016.

While the Villar family owns a giant real estate company, the former senator’s son Mark Villar is currently head of the Department of Public Works and Highways.

Meanwhile, poverty in the country remains underreported. Based on its estimates, Family Income and Expenditure Data in 2015 found at least 50 percent or 11.4 million families faced with monthly incomes just around P15,000 or less.

At the end of it all, Ibon Foundation’s Rosario Bella Guzman asked: can things still get worse?

Guzman, during the bi-annual Ibon Talk, said that while Duterte’s consolidation of power may appear to be “complete,” it is not absolute. This, she added, may be seen in the cracks among his allies, with about four of them vying for the house speakership.

Human rights abuses, too, continue unabated, she said, citing the militarization of supposed civilian agencies that are at the fore of providing direct services and the actual deployment of troops through “surgical authoritarianism” as seen in the various orders of the present administration such as the infamous Memorandum 32 in the pretext of peace, social services, development, to name a few.