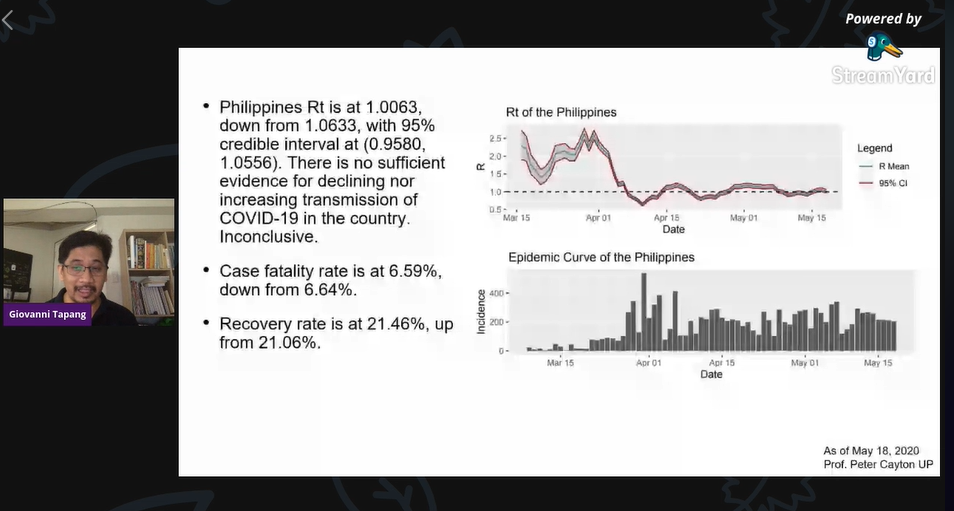 While the Department of Health said that the error is just one percent, there should be due diligence on the part of the DOH down to those who release the data because this will “trigger policy changes that will affect millions of people.”

MANILA – Having correct and accurate data is important because this is the basis of government in crafting policies, a dean of the University of the Philippines(UP) said during an online forum of Second Opinion, May 25.

Giovanni A. Tapang, dean of UP College of Science and chairperson of Agham – Advocates of Science and Technology for the People, explained that while errors in the data are inevitable, there are opportunities to correct these.

This is why Tapang is calling for the Department of Health (DOH) to open its data to the public. The health department has so far tapped data science consulting firm, Thinking Machines Data Science Inc. for the creation of the COVID-19 tracker.

“We are not saying that we don’t trust the data that is being released to us, what we are saying is that we hope that the DOH open its data to other groups to help it improve,” Tapang, also a member of the UP COVID-19 Pandemic Response Team, said.

The UP experts earlier noted errors in the DOH’s data on coronavirus 2019. Tapang said that while the DOH said that the error is just one percent, he said that there should be due diligence on the part of the DOH down to those who release the data because this will “trigger policy changes that will affect millions of people.”

The UP Team also noted a delay in reporting of patients who have been tested positive for COVID-19. Tapang said DOH data reveal that the longest days that a person was reported positive of the virus since he/she was tested is up to 101 days or more than three months.

On the average, the DOH’s reporting rate is two weeks.

“It should be shorter so that the DOH can determine how to manage the case and do contract tracing,” he said.

A look into the COVID-19 tracker of the DOH would also reveal that while there are 13,777 confirmed positive cases as of May 23. Cumulative positive individuals, however, is already at 20,264, which means there is a gap of 6,487.

In his Twitter account, Renato Reyes Jr., secretary general of Bagong Alyansang Makabayan (Bayan), noted that in April, the gap in the number of cases is only at 800.

“Government says we are winning the fight because only 250 confirmed cases for every 11,500 tested. But the 250 daily average remains because that seems to be the maximum capacity for validating positive cases…False sense of security ito,” he said.

The explanation to this, according to Health Undersecretary Maria Rosario Vergeire, is that the validation process is “long and tedious” to make sure that the data being released are correct.

The UP Team also noted inconsistencies in the data drop of the DOH, errors such as reported sex, age and residence of confirmed cases.

Tapang also said that the UP Team noticed that data reporting protocols have changed too often such as date format. He said government’s format is not consistent since March and has always changed even the date.

“It may be nit pricking that we are even talking about date, because date format would mean something. The format should be automated because the cases are increasing. When the format always changes so it’s difficult to analyze data properly,” he said.

Tapang said it is also important that the residence of the confirmed cases are correct because this is used by the local government units as as well as the Inter-Agency Task Force on Emerging Infectious Diseases as basis whether or not to lift or extend the enhanced community quarantine.

Tapang said that data input is really difficult especially when it is on a national scale. He said the errors in the data inputs may be attributed to the stretched manpower such as those who are in the epidemiological surveillance unit or provincial epidemiological surveillance units. In this case, he said, there is a need to beef up human resources.

Tapang said errors in the data can be easily corrected if only the DOH is open to the idea of open data. By open data, he said many groups can look into these data drops and can help into pointing out the errors and eventually correct these errors.

However, the process of data cleaning or data transformation is only done by Thinking Minds.

“Open data is very simple, if publicly funded then it is a public data and the public should have access to it. In this way, there will be many ideas about the data so that the society can make sense of what the number is all about,” he said.

The UP experts have earlier called on the DOH to make all data sources open, while also being mindful of the same data privacy protocols that DOH is following. This, they said, can further empower both official and unofficial stakeholders.

The UP team said that the reporting system should be standardized and regularized, integrated into the existing data tracker as much as possible.

The UP Team also called on the DOH to share relevant data that can help capable institutions make scientific assessments for discussions on the evolving crisis to come up with better peer-reviewed science.

Without open data, Tapang said it would be difficult to know if interventions are successful or not.

“Lockdown would be put to waste if the numbers are not improving. It would be difficult to just relax the restrictions and later on, problems would arise because the government is not prepared,” Tapang said.