In a webinar hosted by the National Council of Churches in the Philippines, human rights lawyer Ephraim Cortez identified pertinent sections in the law that may impact the work and advocacies of humanitarian organizations here.

Cortez said that while the terror law does not include humanitarian activities in both Sections 3 and 12, the exemption provided for the likes of the International Crescent of the Red Cross, the Philippine Red Cross, and other similar state-recognized humanitarian groups can implicitly cover that providing aid may be considered as terror act. 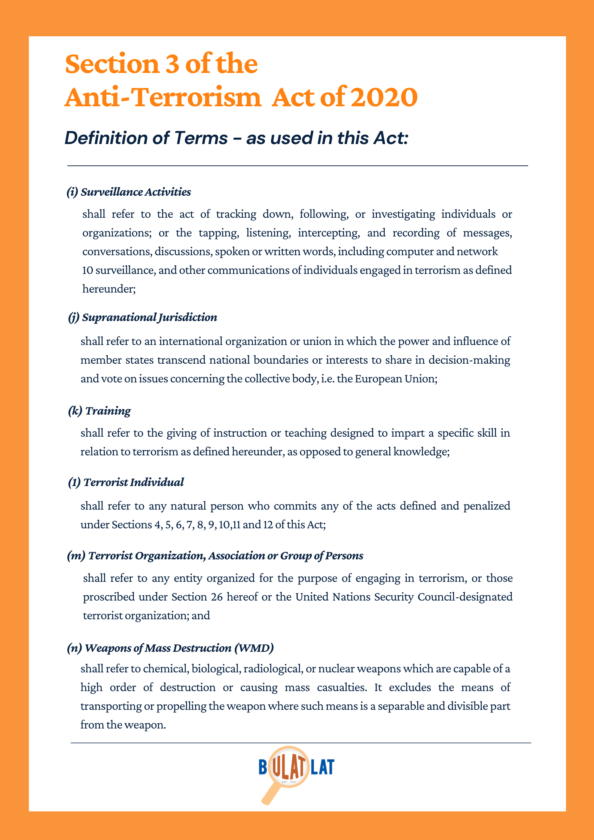 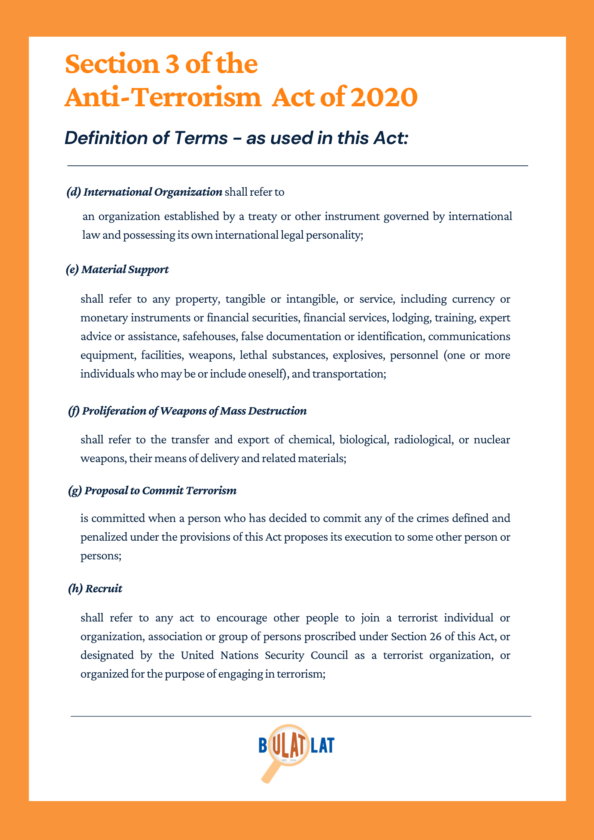 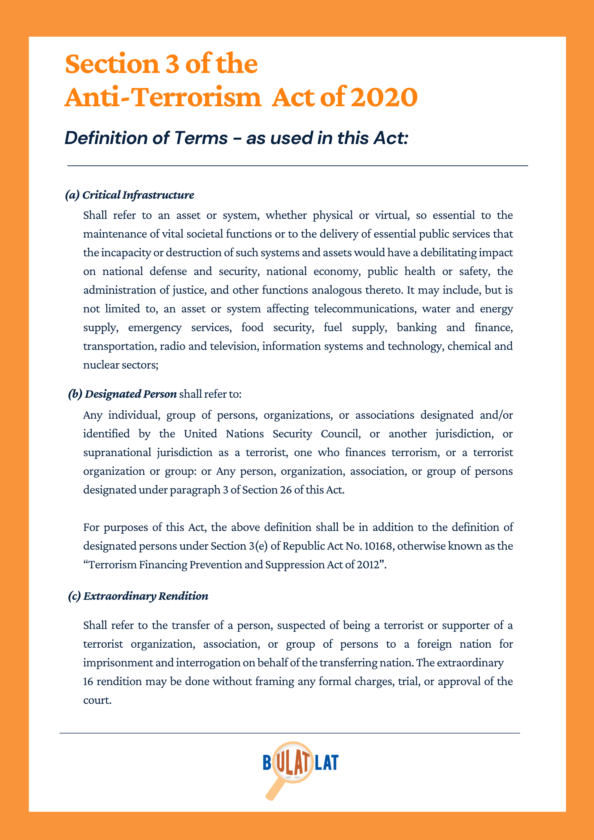 Humanitarian work can be considered ‘terrorist’

Cortez pointed out that the definition of terrorism under Republic Act 11479 is vague and over broad, and could include humanitarian groups which have long been subjected to red-tagging.

In November last year, the NCCP and even international humanitarian agency Oxfam were branded as legal front organizations by a ranking intelligence military officer during a congressional hearing.

This, Cortez pointed out, shows that even before the law was enacted, the military has a list of they deem as “legal fronts” and use it to justify probable cause to order their designation as terrorist.

Such designation will have “serious implications” on the work of humanitarian agencies, including freezing of their bank accounts under Sec. 36 and being subjected to surveillance under Sec. 16. 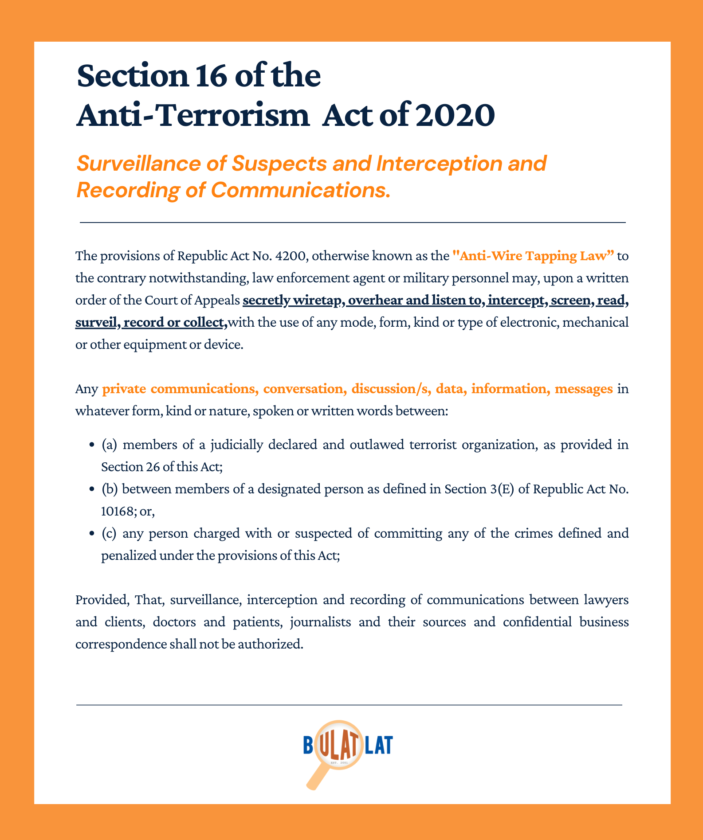 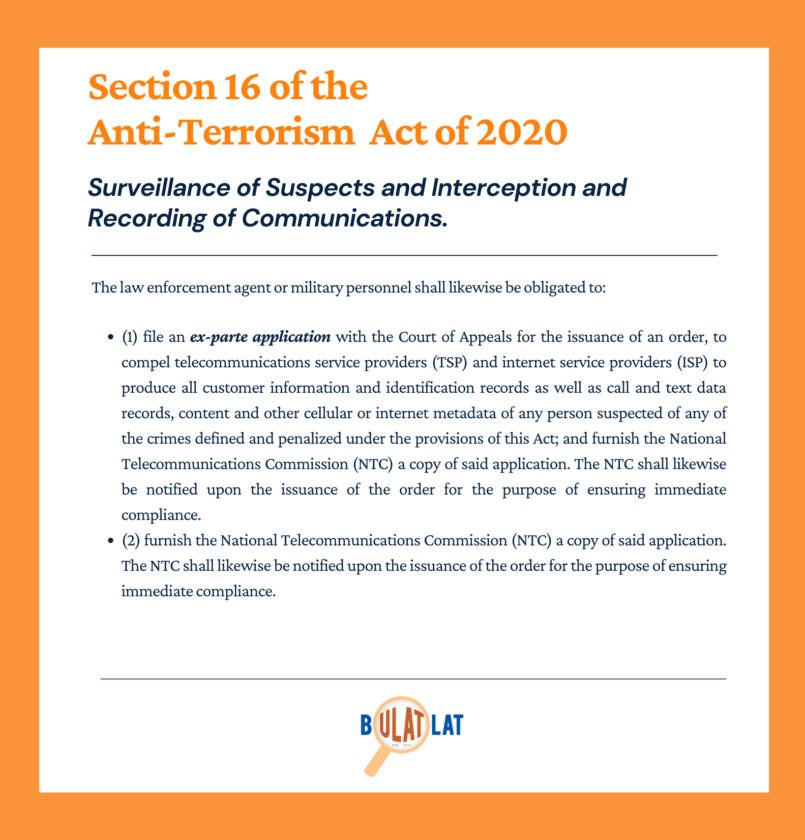 This, Cortez said, can be done even without notice to concerned individuals and organizations, as stated under Sec. 27 of RA 11479.

“If you have grants from international partners, you might not be able to access it. Unfreezing assets can be tedious,” said Cortez.

Providing material support to suspected terrorists is also penalized under Sec. 12 of the law. 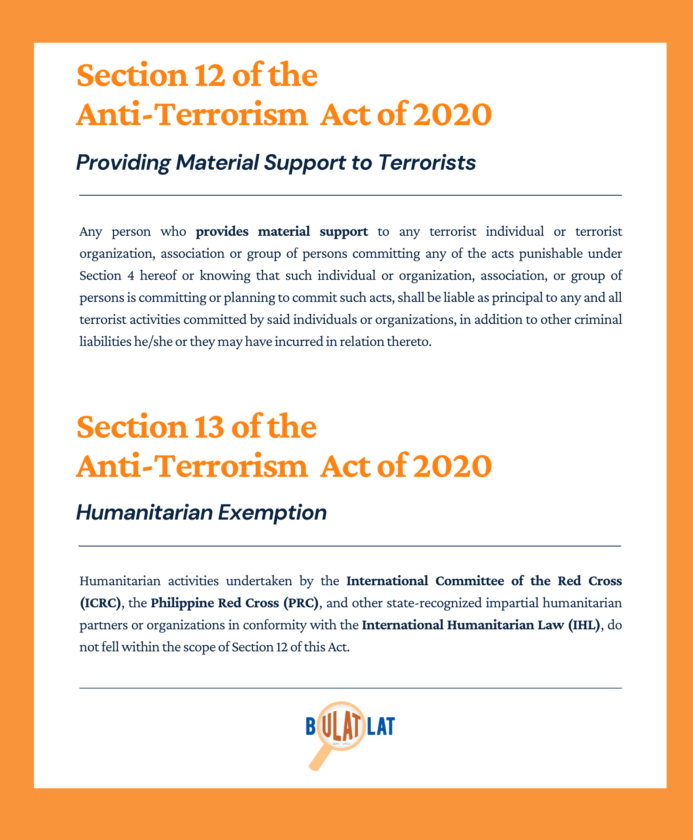 Much like humanitarian agencies, their beneficiaries, too, are subjected to relentless red-tagging. These include indigenous people’s communities fighting against multi-national mining corporations and farmers standing up for their right to land, to name a few.

During the pandemic, several faith-based humanitarian groups have provided much needed aid to communities of indigenous peoples and rural poor. However, their efforts were met with checkpoints and other forms of harassment. At least 35 were arrested and detained.

One of those arrested was Ronel Artizuela of the Task Force Children of the Storm. On May 1, he and nine other humanitarian workers in Marikina were arrested for supposedly violating lockdown measures.

While in detention, Artizuela, who is also a volunteer teacher for a non-profit education institution, said they were repeatedly red-tagged, interrogated, and made to admit to being member of what the police described as “terrorist fronts.”

“I have difficulties in sleeping after our release. I am traumatized,” Artizuela said in tears.

The ten development workers have been released but charges against them remain.

Bishop Dindo Ranojo of the Iglesia Filipina Independiente, who led an aid distribution in Floridablanca in Tarlac for an Aeta community, said that both their beneficiaries and volunteers were subjected to red-tagging.

In one instance, the local police took over the distribution of relief goods, he added.

Worse, some relief packs never reached the poor communities, such as farmers in Hacienda Luisita. The estate, the bishop said, is currently under “strict curfew,” which is implemented by both police and military forces.

Mindoro Oriental-based Rev. Glofie Balintong of the United Methodist Church shared during the webinar that about 30 soldiers have been stationed outside the office of Hagibat, a humanitarian group that provides services to the Mangyans.

Despite the threats, humanitarian agencies are determined to continue providing aid for those in need.

“We hope this situation will not be normalized,” said Kim Leduna, executive director of the Citizen’s Disaster Response Center (CDRC).

Leduna also urged the Supreme Court to heed their demands, with the mounting petitions questioning the constitutionality of the new terror law.

As of this writing, four petitions against the law have been filed before the Supreme Court. Among the contentious issues is the broad definition of terrorism, which may seriously infringe on hard-earned rights and democratic processes despite the so-called safeguards of the law.

Cortez said that in the end, the people will stand against any forms of repression.