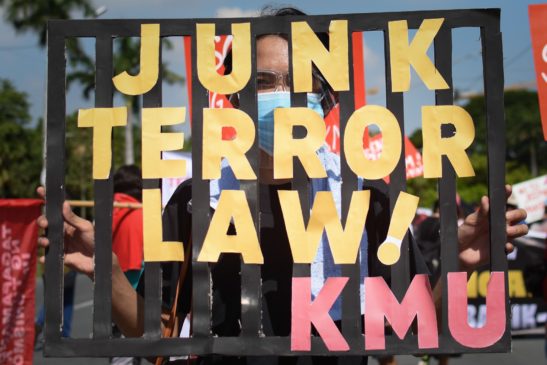 The Anti-Terrorism Act violates international standards on human rights and countering-terrorism with its vague and overboard definitions of “terrorism” as well as the excessive powers it grants to the Executive branch of the government.

MANILA – Human rights lawyers assailed the recently released implementing rules and regulations (IRR) of the Republic Act No. 11479 or the Anti-Terrorism Act of 2020, the most contested law in the Philippine history.

National Union of Peoples’ Lawyers (NUPL) President Edre Olalia said that the IRR contains worrying provisions that “supply, extend, enlarge and even add to the provisions of the law without statutory bases.”

“As we have said time and again, the water cannot rise above its source. The IRR is the blindsided way to cure by way of afterthought a defective and unconstitutional law ab initio,” Olalia said.

Olalia said that Rule 9.1, par 3 of the IRR, which allows extended detention for warrantless arrest even without initial written authority from ATC, legal sanction to extend beyond legal maximum of 36 hours and no liability for delay on delivery of arrested person until 14 to 24 days as long as written authority from ATC is secured before maximum of 36 hours, is not in the law or sanctioned by it.

The ATA also allows detention of a suspect up to a maximum of 24 days even without charges. The petitioners against the law asserted that it is unconstitutional.

Pastores reiterated that the ATC is not a court of law. “It is part of the Executive Department which has been brazen and routine in calling activists as ‘terrorists’ and conjuring alleged ouster plots by the opposition,” Pastores said.

Although Rule 9.1 of the IRR requires law enforcers to submit a sworn statement to the ATC before they can be authorized to conduct an arrest, law enforcers are still allowed to arrest a suspect without warrant even without ATC’s authorization.

“It is like giving the police a blank check where they can list any person they choose to arrest,” Pastores said.

“That the written authorization can be obtained after the arrest, as the IRR provides, reveals its irrelevance and that it is merely meant to deceive the public,” she added.

On designation as ‘terrorist’

Human rights alliance Karapatan said that the power of the ATC to publish list of individuals and groups it designates as terrorists is dangerous.

She cited the killing of peace consultants Randy Malayao and Randall Echanis and human rights worker Zara Alvarez as a result of red-tagging. They were among the 600 names included in the Department of Justice’s petition in 2018 seeking declare the Communist Party of the Philippines and New People’s Army as terrorists under the old Human Security Act of 2007.

“Terror-tagging kills, and we fear that the Anti-Terrorism Act of 2020 would only further empower such attacks and abuses,” she said.

Rule 6.5 of the IRR states: “All ATC resolutions of designation shall be published/ posted in a newspaper of general circulation, on the online official gazette, and on the official website of the ATC.”

For Olalia, such publication is without due process. There is also “no immediate relief and redress for irreparable damage and damage, stigma and violations of rights to presumption of innocence etc.”

He also added that the “probable cause” for designating an individual or group as terrorist, is different from customary established definition and is still based on suspicion.

According to the IRR’s Rule 6.3, probable cause shall refer to a reasonable ground of suspicion supported by circumstances warranting a cautious person to believe that the proposed designee meets requirements for designation.”
Pastores said rules on domestic designation “shows how the government can unilaterally declare persons and groups as terrorists, without prior notice of hearing.”

The designated person or entity may request for delisting, according to the Rule 6.9 of the IRR but Pastores said, “Akin to the notorious and dreaded drug lists of the Duterte administration’s ‘tokhang’ policy, designation is a blatant flex of force.”

Meanwhile, Amnesty International Philippines Section Director Butch Olano said the power given to the ATC to designate “terrorists” “contravenes international norms on due process and presumption of innocence.”

“It also arbitrarily flips a basic tenet of our justice system by pre-judging one as ‘guilty until proven innocent’. Such a change will be prone to abuse, given the government’s penchant for ‘red-tagging’, particularly human rights defenders and activists in Mindanao,” he added.

Olano maintained that the ATA violates international standards on human rights and countering-terrorism with its vague and overboard definitions of “terrorism” as well as the excessive powers it grants to the Executive branch of the government.

“IRR or not, the anti-terror law is but an addition to the government’s arsenal of laws against government critics and civil society in general,” he added.

Palabay calls on people to be vigilant on the implementation of the ATA. As of this writing, there are 37 petitions filed with the Supreme Court questioning the constitutionality of the law.

“We continue to press for the repeal of this law that institutionalizes State terrorism and violence on the people,” Palabay said.

Pastores also urged the SC to act swiftly on the petitions against the ATA. “Every day that passes with this law in place, is a day spent in terror and unjustness,” she said.

“The terror law is a bad law and certainly will be used as a tool of persecution. Our opposition to the law remains firmly hinged on the vagueness of the law, its lack of safeguards for the innocent, and its grave violation of constitutional rights,” she added.