You Are Here: Home → 2020 → November → 17 → Empirical bases for ending the semester and mass promoting UP Diliman students (and ousting you-know-who)

Remote learning cannot continue in the wake of the global pandemic and the strong typhoons, not to mention the incompetence and indifference of the Duterte administration.

In the wake of the global pandemic, recent typhoons and the biggest disaster called government, concerned students and faculty demanded to end the semester and to do a mass promotion.

I conducted on November 16 a quick survey of my undergraduate and graduate students at UP Diliman on whether or not the current semester would end up like the previous one.

The results are in. They are not so surprising.

More than eight out of every 10 students are in favor of ending the semester now and of waiving all course requirements. More than three-fourths of the total respondents think it is okay to get a non-numeric grade of Pass (P) instead of the usual numeric one. (See Table 1) 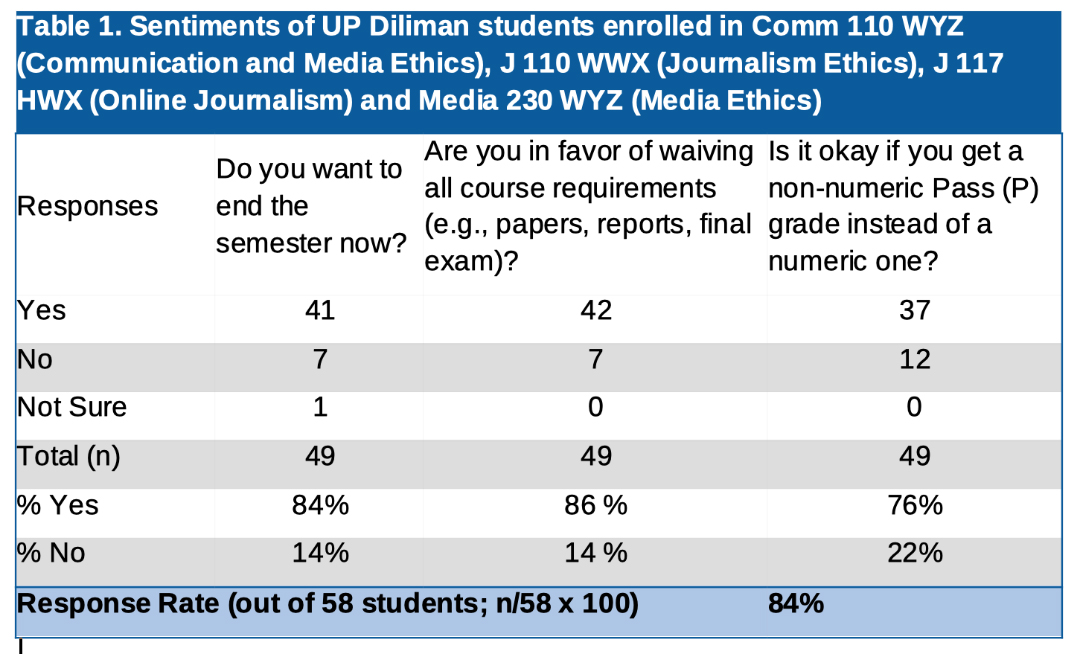 The target respondents are the 58 students enrolled in four communication, media and journalism courses I am handling at the UPD College of Mass Communication. Twenty-four hours after sending the questionnaire through the University Virtual Learning Environment (UVLê), Discord servers and email, I had a response rate of 84 percent (i.e., 49 out of 58 students sent their answers).

They were asked five questions, of which two are internal to the courses and the answers cannot be fully discussed here. While the three questions stated in Table 1 are answerable by Yes or No, there were students who volunteered to explain their answers.

Personally, those who want to end the semester mainly cited stress, anxiety and depression. Politically, students also criticized President Rodrigo Duterte for mishandling the pandemic in particular and misgoverning the country in general. Suffice it to say that some of them cannot wait for the 2022 elections to oust you-know-who.

The collective frustration, however, has an interesting dimension. Instead of waiting for government’s help, students showed their civic-minded side by helping the typhoon victims right now instead of focusing on fulfilling certain academic requirements.

Much as students also mentioned their personal circumstances, we can only acknowledge that they are suffering financially, physically and mentally. We cannot go into details lest we compromise their privacy.
At any rate, such personal and political circumstances explain their desire to waive all academic requirements and just get a non-numeric grade of P (Pass).

Even if they are in the minority, there are students who prefer not to end the semester because they still want to learn, difficulties of remote learning notwithstanding. This is most especially true for graduating students who wish to maximize their last semester in college.

For students who have not consistently attended online classes due to Internet connectivity issues and other personal problems, they do not want to waive academic requirements because they intend to catch up with classmates who are able to comply. Despite their objective limitations, they think it is unfair to their classmates if they do not submit anything. In this context, they prefer to just ease the academic burden, if only to be given a chance to fulfil certain requirements.

As regards mass promotion, some students said that they need to keep their grades up as they are running for Latin honors. There are also those who have to meet certain grade requirements to maintain their scholarship.

Nevertheless, many of those not in favor of ending the semester, waiving academic requirements and doing mass promotion remain open to whatever decision would be best for all, especially those who are suffering from the onslaught of disasters both natural and human-made.

At UP Diliman, the current semester ends on December 9. Faculty members and administrators will decide what would happen in the remaining three weeks before final examinations from December 11 to 18.

If it is true that no student should be left behind, then there is more than enough reason to end the semester now lest we ignore the clear evidence of suffering, no matter how anecdotal it may be.

Aside from ending the semester, waiving academic requirements could help ensure that students and faculty members focus on what is more important – their own physical and mental well-being and their family’s welfare.

It is necessary for the administration to come up with mechanisms in facilitating a mass promotion of students.

Remote learning cannot continue in the wake of the global pandemic and the strong typhoons, not to mention the incompetence and indifference of the Duterte administration. The enabling environment remains absent and students, faculty and parents are still left to their own devices.
The situation is unacceptable and those responsible should be held accountable. This is the time for both students and faculty to teach this government a lesson.