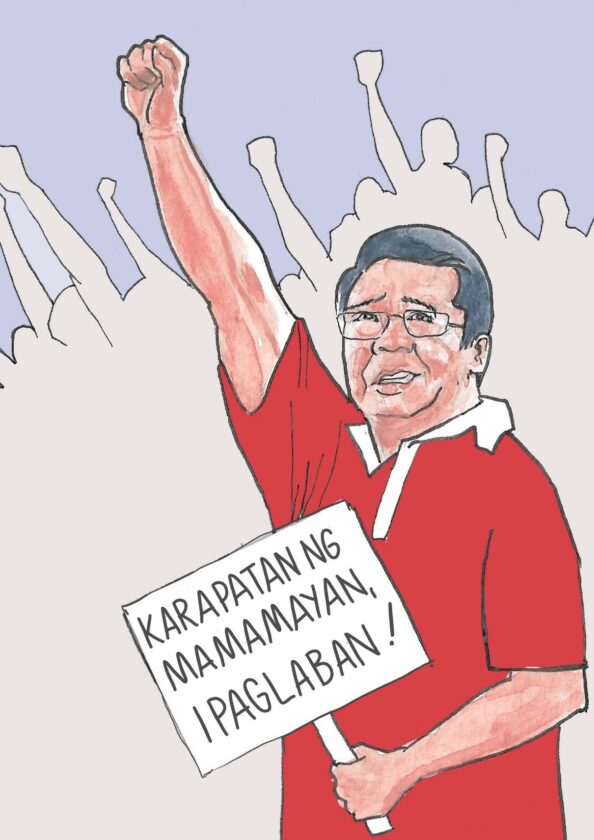 MANILA – In a 2016 Bulatlat interview, then senatorial candidate Neri Colmenares said he would rather lose the elections than his principles. He did not win that election, nor the next one in 2019. Looking back, he let out a half-suppressed laughter during the online interview, asking in disbelief, “Did I really say that?”

For Colmenares, the past five years under the Duterte administration have made him more resolved to stand for his principles. This despite the relentless red-tagging with his photos plastered in several cities, inviting harm to one of the country’s leading human rights lawyers.

Colmenares, the chairperson of both the Makabayan Coalition and the National Union of Peoples’ Lawyers (NUPL), has been actively assisting families of victims of human rights violations, calling out government abuses, fighting disinformation, and filing relevant legal measures to put a stop to what progressives deem as anti-people policies.

Earlier this month, Colmenares, once dubbed as the “fighter” the people need in the Senate, filed his certificate of candidacy for next year’s senatorial race.

“I continued working during and after the elections. I never stopped calling for land reform and for higher wages and all. I never stopped. This is what Makabayan has been doing with or without elections,” he said.

Battling for people’s rights under the Duterte administration

After his stint at the House of Representatives, Colmenares said that he had a relatively slower work pace and that he tried to catch up on reading books, joining chess tournaments, and watching movies he missed. But most importantly, he spent more time with his family. At the same time, he was still actively advocating for people’s rights.

As a torture survivor during the Marcos dictatorship, he continued to assert and defend human rights, especially in the last five years. This despite repeated attempts to discredit him, including the filing of trumped-up kidnapping and other related charges. These were later dismissed by the justice department due to lack of probable cause and for having no sufficient grounds.

He also remained vigilant on the possible charter change under the Duterte administration. He noted that there were more attempts (seven tries) to revise the Constitution under the present administration than former Gloria Macapagal Arroyo’s nine-year rule (four attempts).

He actively opposed the Anti-Terrorism Act of 2020, eventually filing a petition before the Supreme Court to declare it unconstitutional.

There are also issues that remain unresolved over the decades.

Colmenares said that he continued to advocate for the rights of farmers and agricultural workers, an issue close to his heart, as his political awakening was formed in witnessing their hardships growing up in Negros island where remnants of the Spanish feudal system continue to this day.

When he was just 16 years old, he remembered how he was supposed to be part of a five-day immersion to a hacienda. But on their third day, he was already on the brink of quitting because he did not imagine how hard their lives were. Later on, he looked back and realized that he only experienced it for five days, when farmers have been enduring it for decades.

“It is still very poignant to me, how we would walk back to their barracks at sunset after a long day of work. Then, rich politicians would drive by and we would literally eat the dust they would leave behind,” he said.

He also has a big heart for workers, having been a student activist who stayed, slept on carton boards, and ate with unionists who were staging strikes back in the days. “No matter how difficult it was, they were welcoming to us, students. We would talk about issues surrounding the country until dawn.”

Dealing with these issues then, and having to continue seeing these dark moments in their lives now, he said, makes all the challenges of resolving their plight worthwhile.

Even for Colmenares, the law and how it is formulated are very alienating. He recalled how even in his days as a law student, he would inquire about legal phrases and how they can be simplified to make them understandable to the people. “Law alienates the people because of the language. So I promised to myself that if I become a lawyer, I will explain and make sure that my pleadings are as simple as possible.”

He has kept this promise. It has become second nature for Colmenares to explain issues as simply as possible, including laws that may appear complex. There is no secret to this, he added, attributing it to his long experience of working and immersing with farmers and workers.

A not-so-known fact about Colmenares was that he was among those who lobbied in signing the Rome Statute during the administration of then-President Joseph Estrada. He recalled not being so active in the first meetings at Malacañan Palace, but during the last stretch, he remembered preparing a one-page (in Arial and 14-pt.) briefer for the president’s signing.

But in the evening of Dec. 27, 1999, he learned that Estrada’s then-executive secretary had quit and that the copy of the treaty was nowhere to be found. He looked for it, calling one government office after another – name-dropping at that – since some offices were in the middle of a Christmas party. The treaty was signed the following day but the Senate ratification did not happen until the Aquino administration took over. Estrada was ousted a month after signing the treaty and his successor former President Gloria Macapagal Arroyo never transmitted it to the Philippine Senate for ratification and concurrence.

Meanwhile, in his stint as a lawmaker for Bayan Muna partylist, Colmenares shared that it was taxing because he had to be careful on his public pronouncements. Every committee hearing and plenary debate is a fight they need to wage. “You make a mistake on plenary, you make a mistake before the public because the media will report it.”

If there are those who will fight tooth and nail to get a seat in Congress, Colmenares said in jest, nominees of the Makabayan Coalition are not as enthusiastic. This he attributed to the fact that progressive legislators carry out the real work expected of them – carry out privilege speeches, file resolutions to investigate high government officials, or the abuse of private companies.

Lawmakers are layabouts who sit in power for a three-year term, just waiting for their pork barrel, he said.

Among the accusations being hurled at Colmenares and his colleagues in the Makabayan Coalition is being the so-called “enabler” of the Duterte administration.

Colmenares clarified that the Makabayan Coalition never supported President Duterte in the 2016 elections and remained committed to supporting then-presidential aspirant Sen. Grace Poe, contrary to the claims of Sen. Antonio Trillanes when Vice President Leni Robredo announced her senate slate sans the human rights lawyer. He recalled one of his last public speeches before the 2016 elections where he said, “Ano ang gusto niyo, kamay na bakal o presidenteng may puso?” (What do you prefer? An iron fist or a president with a heart?”)

When Duterte won, Colmenares said that, right from the start, he knew that Duterte made trapo (traditional politician) promises. But he added it was worth considering since there have been public pronouncements on ending contractualization and free land distribution, to name a few, which progressives have long been struggling for. Anyone, he said, should grab that opportunity.

While being part of the majority bloc in the first year of the Duterte administration, Colmenares said they were never silent on government policies that attack the rights of the people.

As early as July 4, 2016 – just four days after Duterte was inaugurated as president – the NUPL, of which Colmenares was then president, issued a statement calling out the drug-related killings. A month later, the Makabayan bloc filed a House Resolution questioning these killings. “I don’t know any other political party who filed that,” he said.

Colmenares worked with human rights groups and brought the case before the International Criminal Court, where an investigation against Duterte is currently being held. This is possibly one of the present administration’s biggest considerations in trying to hold on to power beyond the 2022 elections.

“Kapag tama, tama. Kapag mali, mali. Hindi yun kapag lumipat ka, lahat okay na. Balimbing yun,” (If it’s right, it’s right. If it’s wrong, it’s wrong. It is not that if you transfer, everything would be okay. That is being wishy-washy.) Colmenares said, adding that the former should be the kind of legislator that the people would want to put in public office.

What 2022 polls means for Colmenares and the people

The stakes are high in next year’s upcoming elections. And this, Colmenares said, makes it different from all the previous polls as the present administration is all-out in perpetuating itself beyond the elections. Duterte himself has been quoted as saying in media reports that he would bring sacks of money to campaign for those running under his political party.

Colmenares said that there is a big opportunity for the Makabayan Coalition – both in the partylist and senatorial elections next year. It is important for progressives, he added, to field a senatorial candidate that will push the discourse to tackle social reforms and build alliances along the way.

This time, he will share the campaign stage with long-time labor leader Elmer Labog.

He said that an important undertaking this 2022 is to have a united opposition that can go against the election war chests of both the Dutertes and the Marcoses. He said there are more chances for the opposition to win, compared to the last midterm elections, attributing it to both Duterte’s decreasing support base and the factions in his camp.

“If there is an effort to unite the opposition, there are also falling outs in the Duterte camp. Tensions are high between Hugpo and PDP-Laban, and there is also a fight within the PDP-Laban. There are pro-China and pro-US, too, within the administration. It is disintegrating,” he said.

But for the Makabayan Coalition, Colmenares said they will harness their 3.5-million voting base, whom he described as dedicated activists who are willing to do their share to “be a powerful force.” This, he said, should be able to provide a counter-narrative to the lies being spread by about 20,000 to 50,000 trolls hired by the Dutertes and the Marcoses for this election. “The opportunity is there and it should be grabbed.” (RTS, DAA)