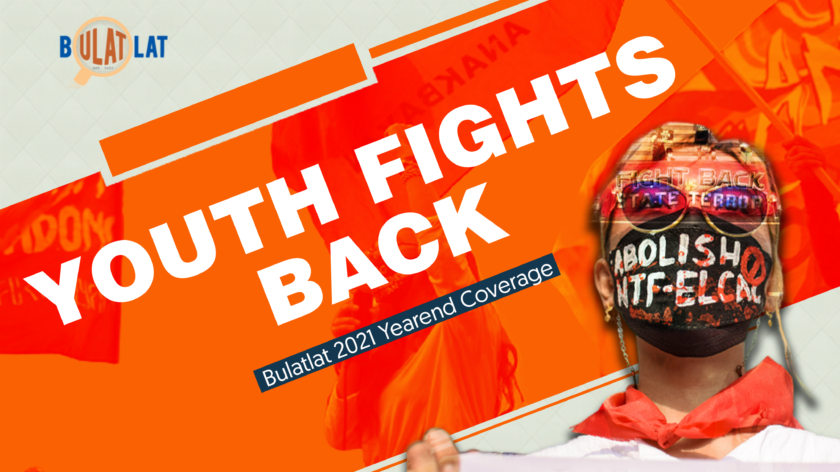 The nearly six years of President Rodrigo Duterte have been marred with repression. The Filipino youth rose to the challenge and duty to stand up against injustices, and push back for their democratic rights.

Two years ago, Lucena was a student organizer in Far Eastern University (FEU) who was engaged in campaigns for student interests and welfare. Her name was first brought to public attention when her mother went on public to demand progressive youth organizations to “surface” her. This has since resulted in a series of unfortunate events – of being forcibly taken, locked up in her own home, and being red-tagged, to name a few.

Despite what she has been through in the past years, Lucena remained resolute in pursuing her advocacies. The same goes for many young activists who, despite seeing how the past six years of the Duterte administration being marred with killings and criminal neglect for those in need, have continued to expose anomalies and call out the government for its excesses.

Under Duterte, the youth has been one of the most targeted by state-sponsored attacks. However, these attacks fueled the youth to persevere in fighting for their rights that is evident in the campaigns they forwarded, and the dismissal of charges against them.

They pushed back, exhausting all avenues available to resist all forms of repression.

In the Polytechnic University of the Philippines (PUP), for example, the Sentral na Konseho ng Mag-aaral (SKM) released Resolution no.4, series 2021, declaring the National Task Force to End Local Communist Armed Conflict (NTF-ELCAC), its members, and Hands Off Our Children Movement (HOOCM) as persona non-grata in the PUP Main Campus to protect the welfare of students.

The NTF-ELCAC has been the source of many attacks against young activists.

The Regional Task Force to End Local Communist Armed Conflict in Region 6 issued a statement denouncing the resolution of PUP SKM and tagged them “ill-informed” about their declaration.

“Fear is the constant weapon being used by the state and its agencies such as RTF6 ELCAC to silence us for keeping legitimate concerns amid the issues we are facing. We stood firmly, even in the presence of this fear, it has shown that we can break through this fear if we come together,” Albiean Revalde, PUP SKM President, said in a press conference.

In the Cordillera, a local court in Baguio granted the writ of amparo petition filed by youth leaders against the police. The court ordered the Cordillera police to stop the red-tagging of youth organizations.

“So far, one of the biggest victories of the youth in Metro Baguio is the filing and granting of Writ of Amparo initiated by the youth experiencing red-tagging,” Cheska Kapunan, 20, and the current Chairperson of the University of the Philippines Baguio University Student Council (UPB USC) told Bulatlat in an interview.

Kapunan said policemen admitted that they own several Facebook accounts red-tagging the students.

A fascist machinery against the youth

The victory won by Cordillera youth is a slap on the NTF-ELCAC, which was created by virtue of Duterte’s Executive Order No. 70 in 2018. Critics assailed that the NTF-ELCAC has used its power and resources to target activists, community organizers, and any members of the open democratic movement. Amid the pandemic and calls for its defunding, the agency still received a P19.1-billion ($382-million) budget this year and is expecting to still receive a P10-billion ($200.3 million) budget in 2022.

Among those constantly facing red-tagging from NTF-ELCAC are youth groups such as Kabataan Party-list, Anakbayan, and League of Filipino Students.

Last June, NTF-ELCAC also filed petitions before the Commission on Elections (Comelec) to disqualify progressive party-lists under the Makabayan bloc such as Kabataan and Gabriela Women’s Party (GWP), saying that their goal is to “destabilize the government.”

NTF-ELCAC is believed to be behind the formation of Hands Off Our Children (HOOC) in 2019, an organization of parents who are against their children becoming activists. The HOOC has co-organized “activities” with the local formations of the NTF-ELCAC different universities, including the “Cordillera Youth for Peace Convergence: Orientation on the Communist Terrorist Group (CTG) Youth and Student Recruitment” held in September 2021.

“They have also been consistently talking down, laughing, and interrupting us while we (the students) are manifesting and telling them otherwise. It was demoralizing but it did not hinder us from asserting our rights and raising the discourse on the dangers of red-tagging,” Kapunan added.

In the same year of their creation, HOOC filed kidnapping and child abuse charges against leaders and members of Anakbayan and Kabataan Partylist, including lawmaker Sarah Elago.

Lucena’s mother, Relissa, a member of the HOOC, accused progressive groups of recruiting students to the New People’s Army, the armed wing of the Communist Party of the Philippines, through progressive groups such as Anakbayan. She also accused the progressive youth group of kidnapping her daughter, which Lucena denied.

In a 12-page resolution, the Department of Justice (DOJ) dismissed the cases last year stating that there is “no sufficient ground to continue with the investigation for the failure of the complainants to show in their evidence the presence of the elements of the crimes by which they are charging the respondents.”

The NTF-ELCAC is so desperate it wants to ban “subversive books” in libraries of state colleges and universities.

Read: ‘Termination of UP-DND Accord had no legal basis’ – law expert
Read: ‘Purging of books is an attack on academic freedom’

In the statement, the UP Rise Against Tyranny and Dictatorship,said, “Libraries, being the heart of the schools and universities, must be protected from all the desires of Duterte’s regime to suppress progressive thinking.”

But even at home, there seems to be no escaping red-tagging. Under the present administration, it has also exploited family conflicts.

In August 2021, Lucena, now 20, released a video saying that she has been kidnapped and illegally detained by her mother, Relissa. She said she was locked up by her parents, prevented from watching television, and contacting friends and fellow activists.

Lucena hoped to repair her relationship with her family by introducing her mother to her fellow activists. But later realized, she said, that her mother was gathering information on their activities and was already in contact with state forces.

In April 2021, Lucena was arrested under the guise of random swab testing. She recalled how village officials showed “no mercy” when she was forcibly taken by her parents. Months later, she would escape her parent’s house again.

“The military is just using our family issues to railroad their fascist agenda,” Lucena said.

Read: What it’s like to have an activist child

Looking at her own experience, she urged parents of young activists to be proud of their children as they are “responsible and curious about the society and exercise critical thinking.” She added that with the dire conditions that the country is facing, they are “compelled to be involved.” At the same time, she also urged her fellow activists to also understand the point of view of their parents.

“For my fellow activists, we are in this fight together and we have the support of the people. So, I push myself to move forward. If I give up, exploitation and harassment will continue,” she said.

Youth fights back against Duterte’s fascism

Despite the attacks they have been subjected to in the past six years, the youth remain committed to their cause.

“Over the years, thousands of youth have joined progressive organizations like Anakbayan not only in the Philippines but also overseas. It only proves that its fight is right and that it is just to struggle for national democracy,” Jeann Miranda, chairperson of Anakbayan, told Bulatlat.

For Miranda, the steadfast determination of the youth to fight for democratic rights and injustices is inevitable and has been proven right.

Back in October 2020, Anakbayan’s Alex Danday and Al Omaga’s trumped-up cases filed by Relissa Lucena and the Criminal Investigation and Detection Group were dismissed due to “lack of probable cause” and “no sufficient grounds.”

A year after, in October 2021, Anakbayan Naga’s Maria Jesusa “Sasah” Sta. Rosa was released after the dismissal of charges of illegal possession of firearms. It was revealed that the raid’s search warrant presented used a different address.

Sta. Rosa is among many red-tagged individuals whose case was dismissed due to the lack of sufficient evidence.

Despite the vicious attacks, the youth continues to persist on account of the victories the sector has obtained.

The youth party-list has been one of the groups asserting the safe resumption of physical classes, emergency student aid, and free university services, among others, through the bills they authored.

Read: Amid persistent red-tagging, Kabataan Partylist remains resolute to serve the youth and the people

In the academe, students from different organizations and universities have been pushing for humane, quality, and accessible education that has been unreachable under remote learning. For one, students from different universities in Baguio mounted protests pushing for academic break. The Saint Louis University has approved their call for #AcademicBreakNow.

Amid the incessant attacks, youth organizations are continuously expanding their membership and chapters, not only in the country but also abroad, just like the establishment of Anakbayan chapters in the United States of America (USA) and Canada, said Miranda.

“The government will only weaponize his fascist machinery and red-tagging to inflict fear which they cannot even prove in the court. But then, we are on the right path. We commend the youth for continuously expanding memberships and championing campaigns. Let us once again prove it towards achieving ligtas balik-eskwela,” Miranda ended.

As for Lucena, the youth must unite as one to combat tyranny. “We must struggle collectively and challenge the government to uphold our democratic rights. As the 2022 Philippines election draws near, we must frustrate the Marcos-Duterte tandem to prevent further heinous attacks on the masses,” Lucena said. (JJE, RVO)