No review still for cases stemming from ‘search warrant factories’ 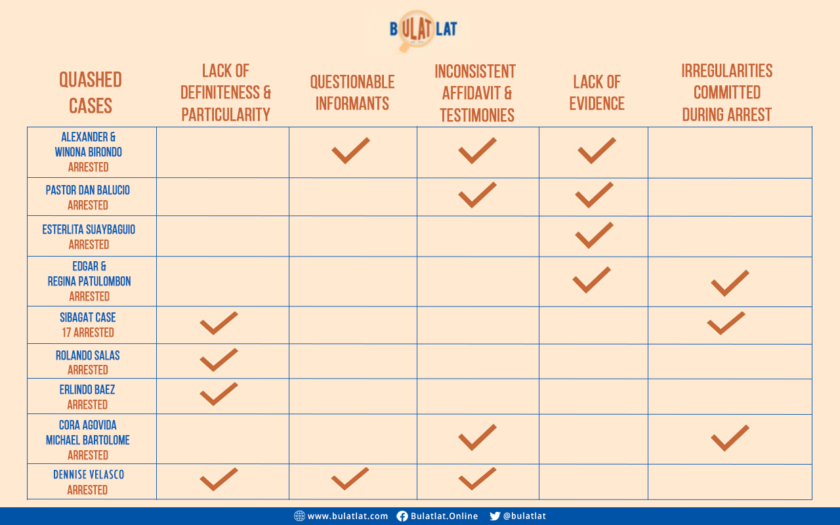 MANILA – The recent junking of charges against labor organizer Dennise Velasco is yet another vindication against the “search warrant factory” that has led to the arrests of activists in recent years. Still, there has been no review of cases stemming from these so-called death warrants.

In a March 2 decision, Quezon City Regional Trial Court Branch 220 Judge Jose Paneda found no probable cause for the issuance of search warrants against Velasco, saying there was no probing and exhaustive inquiry when the police applied for the said warrant.

The search warrant was issued by Quezon City Executive Judge Cecilyn Burgos-Villavert, who was previously allowed, along with Manila’s executive judge, to issue search warrants that may be served to those outside their jurisdiction per a Supreme Court circular. This finally has been stopped, with police officers also mandated to wear body-worn cameras in serving search warrants, following a series of arrests on March 7, 2021, that led to the killings of activists in Southern Tagalog (now known as Bloody Sunday).

Villavert’s search warrants, meanwhile, have been quashed one after the other by co-equal courts.

Read: Dismissed cases: A look at the invalid search warrants vs red-tagged activists

In a previous interview with Bulatlat, human rights lawyer Kathy Panguban of the National Union of Peoples’ Lawyers (NUPL) said among the trends they have observed on dismissed charges that stemmed from these search warrants is the question of planting of evidence during police operations.

A look into Velasco’s case

Labor organizer Velasco was among the seven activists arrested in the wee hours of Dec. 10, 2020, International Human Rights Day. Earlier reports said Velasco was led outside their house as the police searched it. The police then returned, saying that firearms and explosives had been found.

In his decision, Judge Paneda said “the examination conducted by the issuing judge on the applicant and witnesses fell short of the required probing and exhaustive inquiry for the determination of the existence of probable cause.”

“Although there is no fast-and-hard rule as to how a judge may conduct his examination, it is axiomatic that the said examination must be probing and exhaustive and not merely routinary, general, peripheral or perfunctory,” Judge Paneda said.

With a void warrant, Judge Paneda said the supposed pieces of evidence found are inadmissible “as if they entered the accused’s house without a warrant.”

Apart from Velasco, trade unionist Rodrigo Esparago and journalist Lady Ann Salem were also arrested on Dec 10, 2020, with the police serving Villavert’s search warrants. The charges against them have been dismissed by a Mandaluyong court, citing lack of definiteness and particularity, questionable police informants, and the inconsistencies of affidavits and testimonies against them.

Both walked free from prison on Mar. 5, 2021 after almost three months of incarceration.

Another set of recently dismissed charges that stemmed from the search warrant factory is that of activist spouses Cora Agovida and Michael Bartolome. Both were arrested in October 2019, with the police officers conducting a two-minute search in their home but were only able to produce the items they supposedly confiscated a month later.

In his November 24, 2021 decision, Manila judge Marlo Magdoza-Malagar said that while the prosecution established the existence of the firearms, the court noted that circumstances surrounding the second element “cast reasonable doubt on the prosecution’s claim that the firearms, ammunition, and explosives were found in the possession of Bartolome and Agovida during the execution of the search warrants.”

The search team, the decision read, also breached the “knock and announce” principle, the testimony of prosecution witnesses was contradictory, and “the chain of custody in handling the confiscated guns and hand grenades was broken.”

Malagar took judicial notice, a rule of evidence in the Philippines where proof in court is not necessary, that the application and implementation of these search warrants are susceptible to abuse, and that this has “even resulted in death under disputed circumstances, that these judicial orders had been dubbed by some as death warrants.”

The search warrant served to Agovida and Bartolome was also issued by Judge Villavert.

Apart from Agovida and Bartolome, three more Manila-based activists Alma Moran, Ram Bautista, and Reina Mae Nasino were arrested that early morning of October 2019. Nasino gave birth while in detention and her three-month-old baby River passed away when they were separated.

Earlier calls on the audit of cases stemming from ‘warrant factories’

In an earlier statement, Kapatid, an organization of relatives of political prisoners, has called on the Supreme Court to review cases “that emanated from the sala of those judges who turned their courts into a search warrant factory that led to the arrest and outright killing of activists.”

There are no public pronouncements that these cases are being reviewed as of this writing. (JJE)